Phannie Gets New Jacks; I Avoid the Funny Farm (For Now)

The new jacks are done! I'll give you the details below, but first, a little background info:

I have put up with the infernal Atwood electric jacks that Tiffin--in perhaps one of its two worst engineering debacles--installed on some of its coaches in the mid-2000s; Phannie, unfortunately, was one of those. The other engineering catastrophe was when they installed plywood flooring under the wet bay during the same years; Phannie was one of those, too. I can't imagine who at Tiffin thought that was a good idea; the words "wet" and "plywood" should not even be used in the same sentence. To his credit, Bob Tiffin replaced every one of the plywood floors with waterproof material at no cost to the owners. That episode with Phannie is documented in this post.

I wasn't so lucky with the Atwood jacks. I suppose some owners had pretty good service with them, but I know plenty of others like me who had nothing but trouble. I suppose that, because of the difficulties, Atwood offered an upgrade kit a few years ago that consisted of replacing all the jacks and the brain with what was, supposedly, a more reliable and robust system. Due to my exasperation, I bought the kit and had it installed by Tiffin. For a year or two after that, things went fine. But then I started having trouble with them again and, by this time, Atwood announced that they were no longer going to manufacture the jacks nor were they going to make any parts for them either. I can't say I blame them, failed as they were, but the name Atwood will forever be a dirty word in my vocabulary from now on. So, there went $3,500 that I would much rather have given to family or any worthy cause.

As time went by and the troubles continued, these jacks ultimately became the bane of my existence. Fortunately, I was saved from the funny farm when both HWH and Bigfoot came out with a hydraulic jack retrofit system to replace the junky Atwoods. This was great news! If I get one of these, it can't possibly cost as much as psychiatric therapy, I thought. So, I carefully researched both systems and decided that Bigfoot offered what appeared to be the better designed and more robust product at a lesser cost than the HWH kit. And, fortunately, I had two friends who had the Bigfoot retrofit systems installed recently, and they are very happy with them. Thus, the decision was made and the appointment made with Bigfoot. As you may recall, the previous post left off with our arrival at the Bigfoot factory and parking for the evening.

The next morning, we had gotten up very early to make sure we were dressed and Phannie was all buttoned up and ready to go. Promptly at 0800, there was a knock on Phannie's door, and Jeff said we could go eat breakfast, as they would take it from here. So, we drove into downtown White Pigeon and stopped at Rachael's, a small cafe that appeared to be very popular with the natives. We had a very nice and leisurely breakfast, knowing there would be no need to hurry, as the installation would take 6-7 hours to complete.

After that, we drove back to the main office waiting area, where we relaxed and napped a while. Then we went to get some gas in the car and stopped by the local grocery store before returning to the Bigfoot office.  Soon after that, one of the guys came in and said, "We're all done; come on down to your rig, and we'll show you how to operate it."

I couldn't help but walk around Phannie and admire the shiny new jacks, upon which I had them install SnapPads, at an extra cost of about $200. Then we stepped into Phannie's cockpit to take a look at the new control pad:

Everything seemed pretty straightforward, and I was pleased to have a separate air dump capability, which I didn't have with the Atwood system.

The Bigfoot system uses an individual extend/retract self-contained hydraulic system for each jack, controlled by a central brain. It will not operate and will alarm if the jacks are down with the engine running, so as to ensure no attempted driveoffs with the jacks extended. It can be operated with automatic or manual leveling, as desired, but the automatic worked perfectly.

Although photos are not allowed by customers during the installation, I told them the installation would be featured in a fairly widely-read RV blog, and they quickly offered to take photos for me, which I appreciated.  Here is a photo of Phannie backed up onto ramps to give the workers more room underneath: 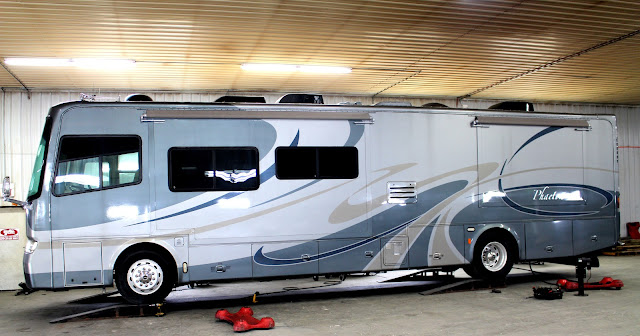 Here is the last look at one of the Atwood jacks that would soon be extracted: 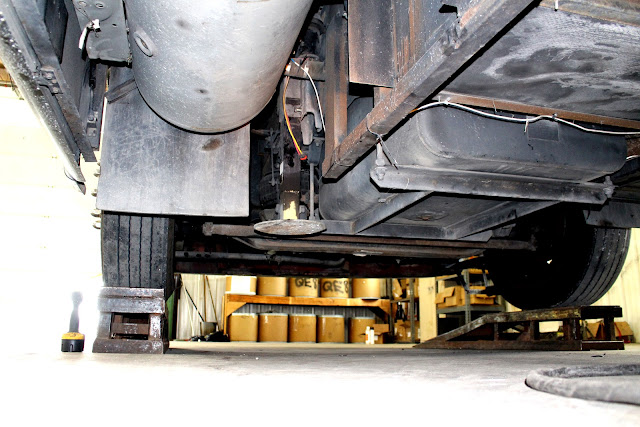 Here is the last Atwood jack, lying pitifully on the floor, as if ready to be picked up by a hearse. Good riddance! 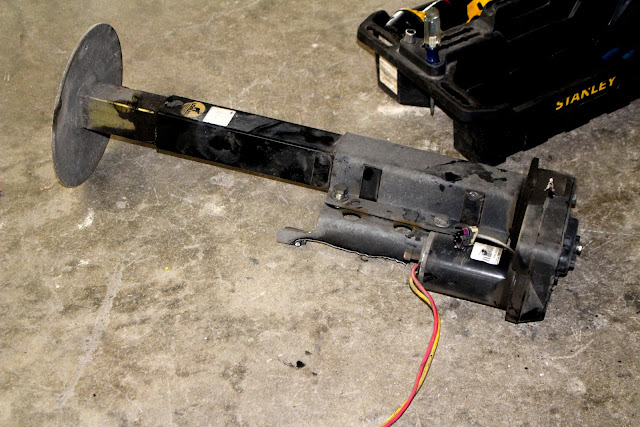 Here is a worker, welding the new jack support in place: 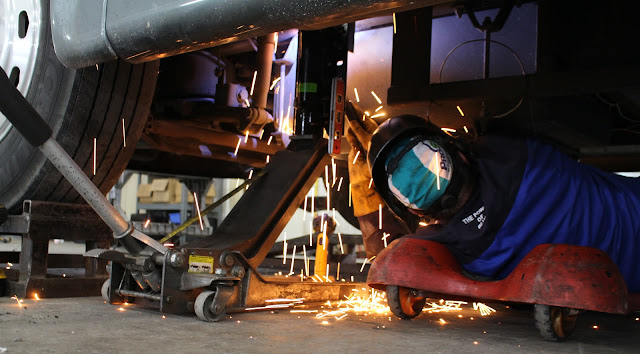 The new Bigfoot jack housing is now in place: 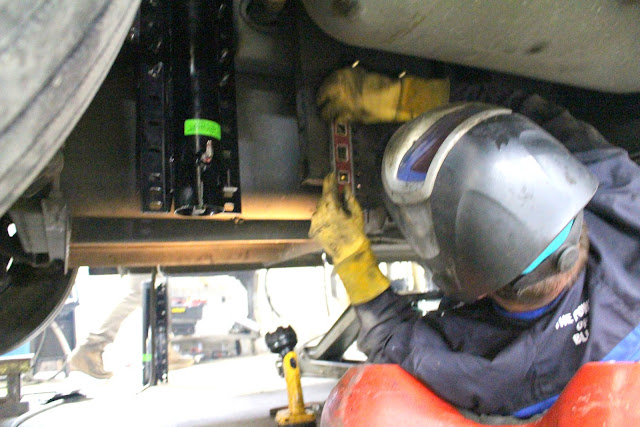 Next, the jack's pump/valve control module and hydraulic reservoir are installed: 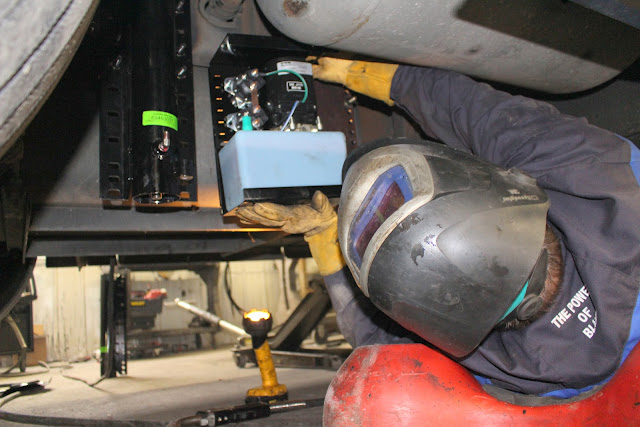 Two more pump/valve control modules and reservoirs are waiting to be installed: 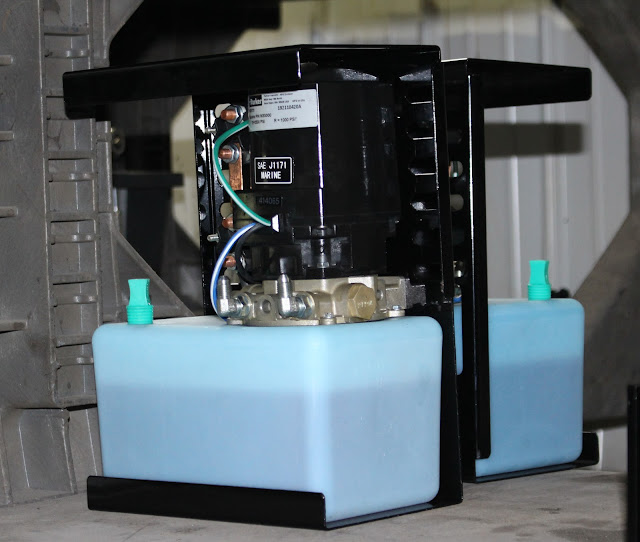 After about seven hours, voila! The installation is done and we are hooked up and ready to go; we will make our next stop, Montague, Michigan by 1730. 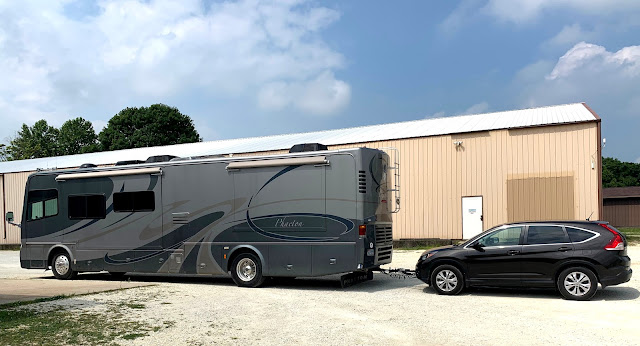 Here is a photo of one of the jacks extended at our next stop. I love the SnapPads. I should never have a need for extra pads with a footprint like this: 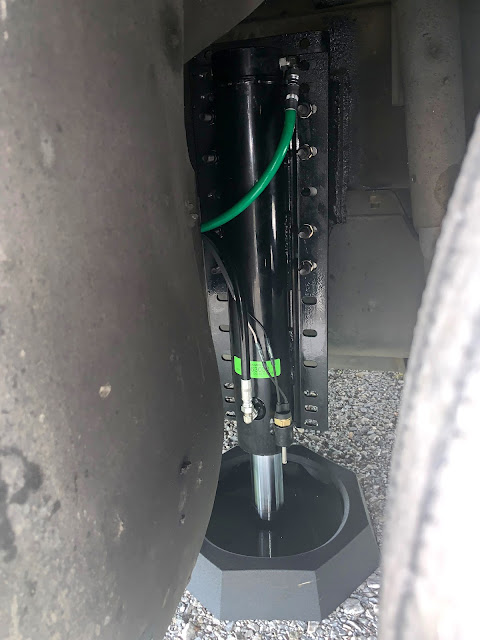 Reaching Montague, we activated the system for the first time and oh, what a difference! After dumping the air, I pushed the auto button and the system activated almost silently and, after a few bumps, the leveling was done. Never before has that task been so quick and easy, and never before has the coach been so level and secure-feeling. To say we're happy would be a huge understatement. Looks like they will not take me away in a strait jacket after all.  Stay tuned as we travel up the UP in the next few weeks.