I need to back up a day and show you a photo of a storm approaching our RV park on Lake Michigan around sunset when we returned from Petoskey: 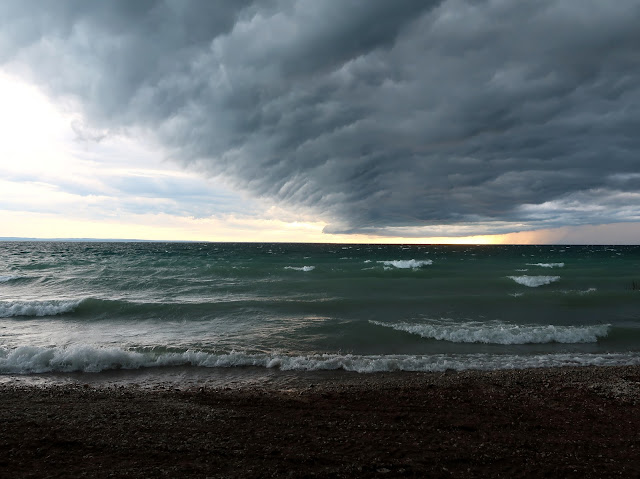 I was captivated by the speed at which the storm was moving and the waves the wind produced. Since the far shoreline is so distant, the body of water looks like an ocean, especially judged by the breaking of the waves onto the beach.

Although this was a fairly mild storm, I can see how vicious the weather could be on the Great Lakes and how a huge ship like the Edmund Fitzgerald met its fate. By the way, I had a bit of a surprise from younger members of my family who had no clue about the Edmund Fitzgerald, even though I thought her sinking in 1975 and the loss of all hands aboard seemed pretty well immortalized by Gordon Lightfoot's song, The Wreck of the Edmund Fitzgerald. But then, I thought, that really was a long time ago to the youngsters, who thought that time period was when dinosaurs still roamed the earth.

Oh well. I won't go into the details of her sinking here; it's too easy to get it from Wikipedia. For those whose interest has already waned to a point where not a single mouse click is worth it, here is a photo of the freighter four years before her sinking near Sault St. Marie, Michigan in 500 feet of water. At the time, she was the largest freighter sailing on the great lakes, and I find her story quite captivating. It is available in a number of books written about the accident.


So, I digress; well, that's nothing new, is it? Let's get back to Mackinac Island. We bought a round-trip ticket from St. Ignace on Shepler's, the oldest ferry boat company with the best facilities, we observed. The trip to the island took about 15 minutes, and some of the passengers on the top deck got a little wet from the bow wake caught in the wind. I was one of them, of course. Sandy took this photo of me with my sunglasses removed due to the spray. The right side of my shirt was also wet: 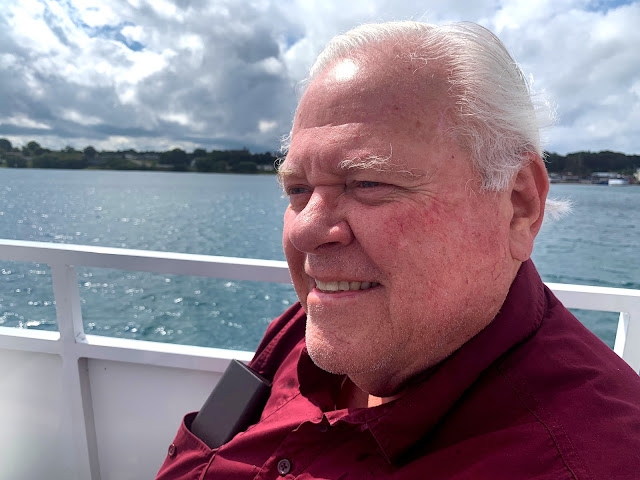 The weather was just about perfect, as you can see...puffy clouds and the temperature in the low 70s.  In the next photo, we're approaching the harbor. I'll have a good photo of the boat later:

The first surprise was that the Michigan governor's summer 'house' is here on Mackinac. Here it is, overlooking the harbor: 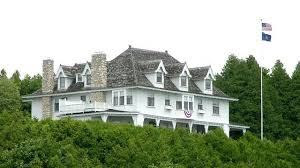 Once docked, you stroll out onto the main drag where, of course, there are no motorized vehicles--just horse-drawn carriages and lorries and about 50,000 bicycles that can be rented from several places near the harbor. If you look closely in the photo below, you can see a horse-drawn carriage going away from the camera and another coming toward it. There's also a bicycle on the right side of the street. I'm amazed that the camera caught only one bike. In another minute, there would probably have been a dozen more in the photo: The next photo shows some of the very nice older homes on Shoreline Drive, a lovely street very close to the waterfront. We took a long walk on this boardwalk, enjoying the perfect weather, not thinking all that much about the Hades-like oven in some of those states way down south, including the one we call home, whatever it is: 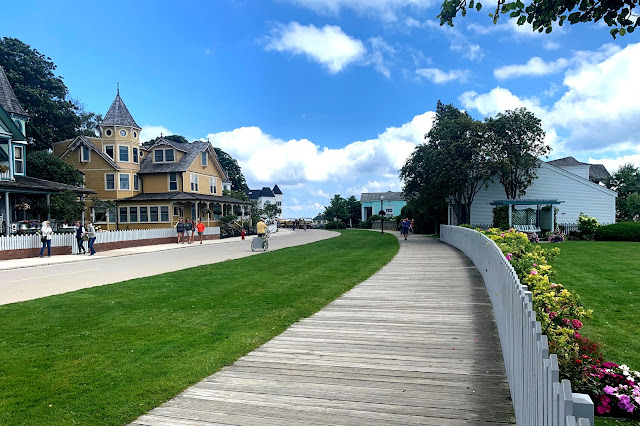 The main attraction in Mackinac, of course, is the Grand Hotel, built by a railroad consortium in 1887 and claiming the world's longest porch, something that is quite believable. Rooms at the opening of the hotel rented for $3 to $6 per night, the equivalent of $85 to $140 nowadays. By the way, you can rent a standard room  today for around $500 per night (but here's the good news: You also get breakfast). It is, of course, the setting for the romantic movie, Somewhere in Time, filmed in 1979, starring Christopher Reeve and Jane Seymour: 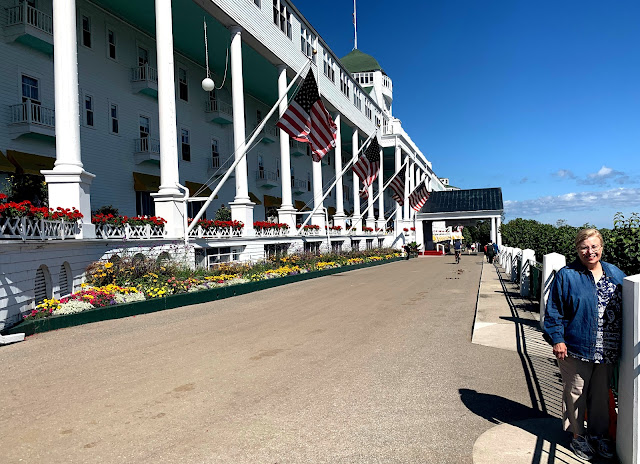 Below are some more photos of the hotel, starting with the front entrance, where guests are dropped off from carriages and greeted by liveried bellmen with the iconic round hats you see in the old movies. (I'm very irritated that I failed to get a photo of one of the hotel's beautiful carriages, which commoners like us can ride to the hotel for $5.50.) 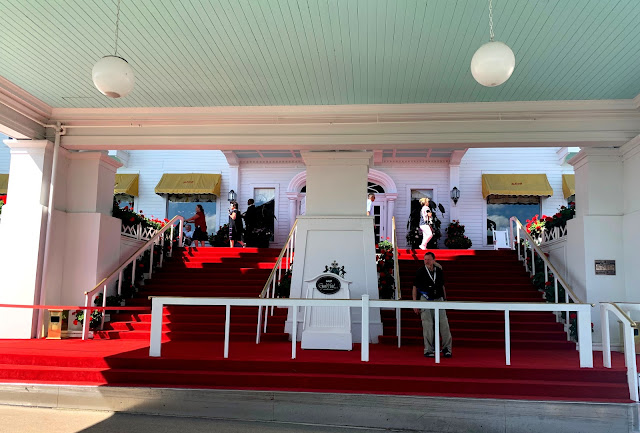 Inside the hotel to the right is a promenade leading to very upscale shops and a venue for tea: 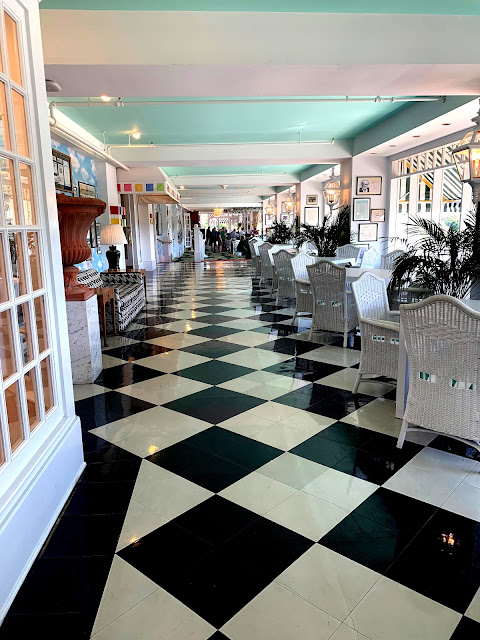 Forward and left is the main lobby where, if you look closely, you can see a harpist, who was playing softly in the background at the time. It was all very, well, Grand: 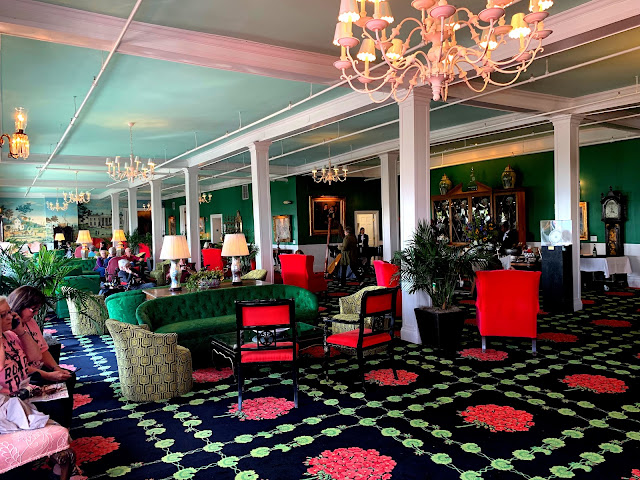 Of course, Sandy and I were obligated to make an appearance on the famed porch, in order to get full value for the $10 each they charge just for you to look at the place if you're not registered there: 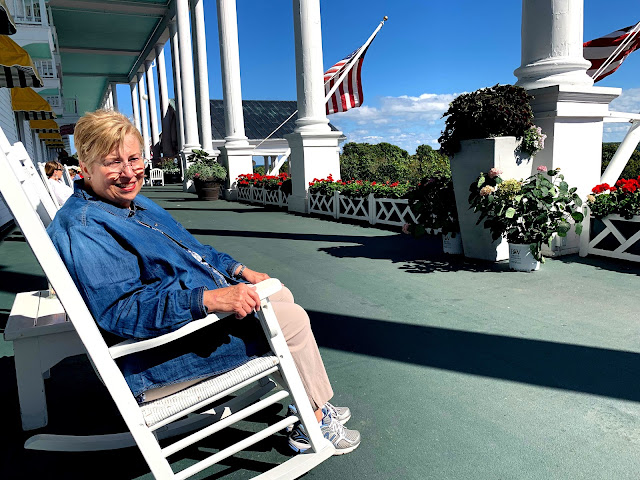 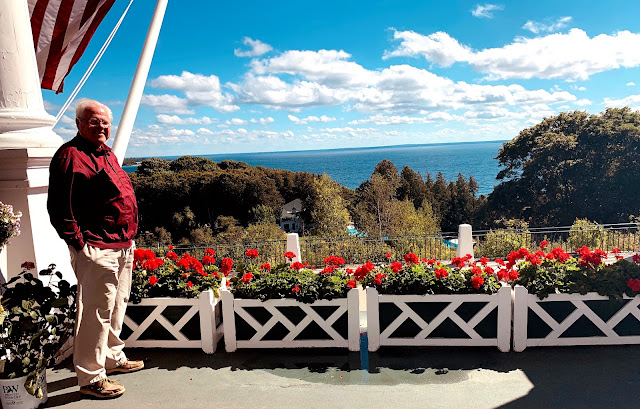 At the risk of bringing way down the level of sophistication of this narrative, I feel compelled now to point out an observation regarding, well, horse dung. I can't help it; I see things that are unusual or unexpected, and I feel an obligation to comment on them, my only thought being for the humor, edification or disgust of my dear readers, as the case may be. I hope it is more of the first two than the last.

You see, with hundreds of horses pulling carriages and wagons through the streets around town and in the driveways encircling the pristine grounds and buildings of the Grand Hotel, there is almost always within view a little smattering of excreta from these magnificent animals. One thing I've noticed about horses is that they appear to have no sense of timing or modesty as to when or in front of whom these expulsions occur, bless their hearts.

If these fragrant little piles were allowed to linger through the passage of several dozen horses, the result would be an accumulation that would not fit perfectly the general theme of opulence that is obviously the desire of the hotel management. To my utter amazement, with every one of these, ah, aromatic events, a hotel attendant suddenly emerges from some unseen hideaway, pulling a cart containing a shovel and a broom, deftly scooping up the detritus, leaving the roadway as clean as the day the asphalt was laid down. I estimate that the time that passed before the little pillows dropped and then disappeared to be approximately three minutes. Don't believe me?  See for yourself: 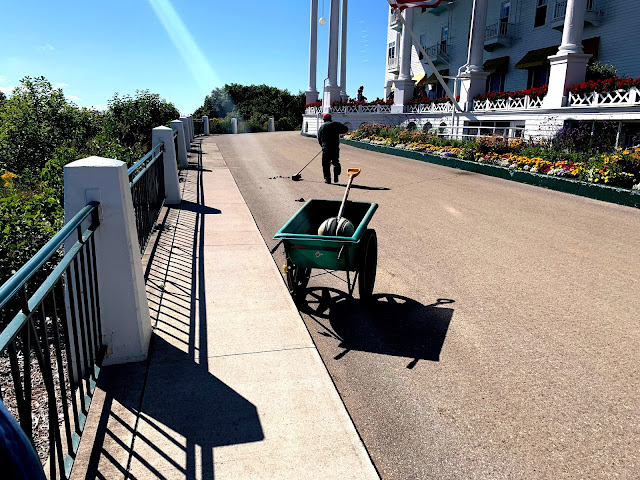 Now this begs the question, "Who, exactly, applies for such a position and how much is he paid?" I also wondered what he says when someone asks what his profession is. I thought it would be a bit unseemly to ask these things of the worker in the photo, so I suppose I will never know the answer. That will be another one of those imponderables, of which I have many, I'm afraid.

I should mention that the gentleman above is not alone, by any means, in his performance of this obviously necessary duty. The town itself employs a whole regiment of these brave poop scoopers, whose job downtown is ever so much more intense, due to the far greater number of horses involved. They do an amazing job of keeping the streets fairly clean but, even so, I must tell you that there is the almost constant slight odor of horse manure in most parts of the town, unless there is a strong breeze blowing off the lake. I would assume, then, that the residents themselves would have the scent wafting up the hill toward them from the harbor. But who knows--perhaps to the natives, it is the smell of money, and there is no shortage of that left behind when the tourists sail away on the last ferry at 10:00 p.m. each evening.

Well, I trust that was quite enough narrative on the matter of horse droppings, so let's move on to something more pleasant--fudge! It is not clear to me what it is about Mackinac Island that compels tourists to buy fudge--and quite a lot of it, based on the number of
dispensaries lining Main Street. There are no fewer than 13 fudge shops on the island, requiring the importing of ten tons of sugar per week to supply the demand. This is incredible, based on the fact that most of the visitors we saw were hardly spring chickens, including ourselves, and most of whom, in all likelihood, would have gotten a stern lecture from their doctors if they knew they were fudge-diving like this.

So, you're assuming that we put our good health above the temptation, right?  El wrongo! We moseyed into Murdick's Fudge Company and, immediately spying a stack of substantial little slabs of butter pecan fudge, I demanded a sample, which the young lady behind the counter happily provided. This was lucky for her, because I think I could have taken her hostage, even at my age, if she had refused.

The sample was small, but it was enough. Sandy and I both love anything butter pecan, and this little morsel was like opium to an addict. "I'll take two dozen," I almost said, catching myself and instead saying, "I'll take one." I thought that was remarkably restrained, and I hoped that some of the chemicals in the the many prescriptions I ingest have taken care of the sin of that indulgence.

Here's a photo of one of the candymakers who has just poured out a fresh batch of hot fudge onto a marble slab and is waiting for it to cool. The piece in the foreground has been formed and cooled and is ready to cut into slices: 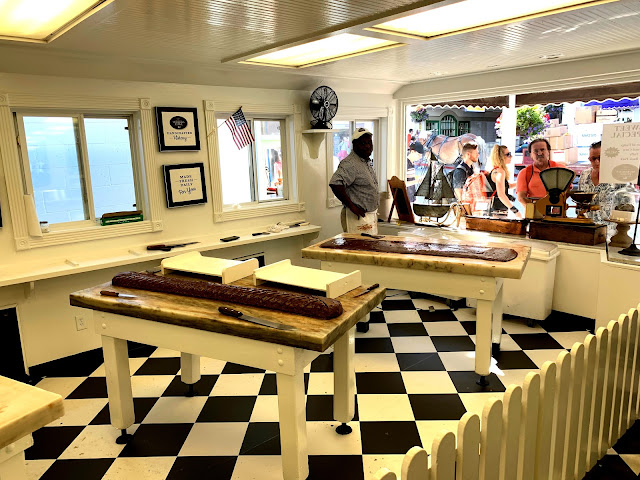 This is the slice of butter pecan fudge that we bought. (It no longer exists): 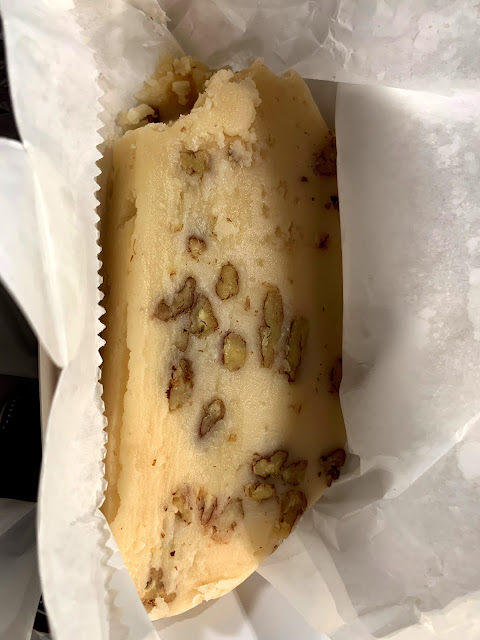 We also bought some souvenirs for the kids, and there were, of course, many shops open for that purpose.

So that was our experience at Mackinac Island, and we're glad we went. We had always imagined what this famed place looked like, but there's just no substitute for being there.

Leaving for St. Ignace, we thought our ferry was having a race with another Shepler boat of the same type as ours. However, the other boat broke off in a few minutes, as it was headed to nearby Mackinaw City: 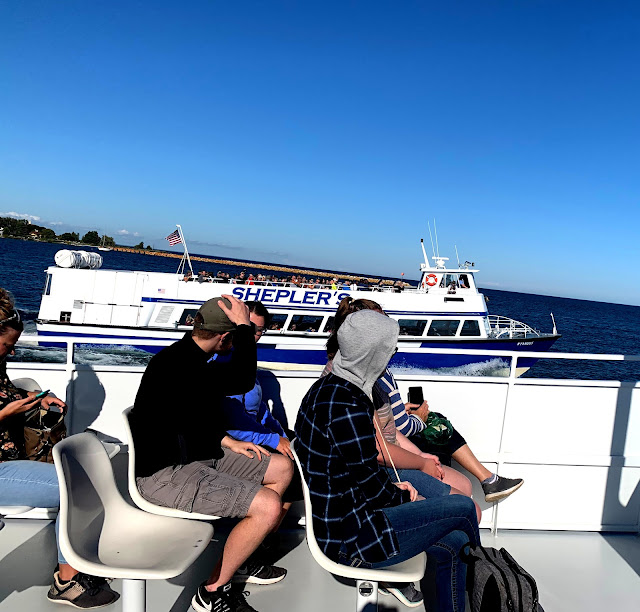 I hope you enjoyed our story about Mackinac Island. Our next post will be about Sault St. Marie. Stay tuned!