On The Road Again; the Psychology of Getting Back on the Horse

I have discovered I have had some mild psychological effects from my mishap in Fredericksburg and the aftermath of surgery and physical therapy I have experienced. Perhaps most evident among these is the realization that I'm feeling my age more than ever. While I have worked hard at doing my shoulder therapy as prescribed, and my progress has exceeded expectations, I am much more mindful of my limitations in motion that, unfortunately, have been creeping in, including the onset of arthritis that has shown up in my knee and hand. The cumulative nature of these makes me acutely aware that the seeming indestructibility of youth is far behind me, having been replaced with a running calculation of sorts--a constant risk assessment of whatever activity I might be contemplating.  Here's a hypothetical example:  I am standing alone on smooth ground, but close by is an area strewn with boulders, rocks, fallen tree limbs and other detritus that could be hazardous to walking without tripping over something. Suddenly, a gust of wind blows the hat off my head and well into the rough area. Do I walk into the rough area to retrieve it?  I think not; I can afford another hat. Before the fall at Fredericksburg, I probably would have gone after the hat.

This realization is something new; I never really felt old and vulnerable before the accident, and it's getting harder to push these thoughts aside as I recognize the decreased mobility and dexterity issues in several parts of my body. But push them aside I will, to the best of my ability; I refuse to "go gently into that good night," as Dylan Thomas wrote. I'm just going to try to be much more careful in my movement and wise enough to know my limitations.

Because of my desire to keep the old man out, as Clint Eastwood explains his vigor in old age, I was determined to carry through with our longtime plans to drive Phannie to meet friends in Missouri and then continue to Michigan. And so we did, departing Conroe as planned, except a little later into the hot summer than we had anticipated. The bright spot is that we got to spend more time than usual with the kids and grands! The trip was cleared by Dr. Hayes and the therapists, after I promised to adhere to the daily exercise instructions they prescribed until returning.

As it turned out, there was no need for apprehension on my part, as I had very little difficulty with the physical activities involved with departure, driving, fuel stops or overnight parking and hookups. That's not to say that my shoulder is back to normal, as there are still some arm movements that are restricted, but I found that I can use it much more than I expected.

So far, I have kept my promise about the exercises, and these workouts have now become part of my daily routine. Oddly, I almost look forward to these, as through doing so, I can see slow but steady progress in regaining mobility and strength in my arm. Once on the road with a couple of overnights behind us, things really began to feel more normal again. Yes, there were the little grunts and winces as certain of my movements reached their pain threshold limits, but it was so good to be "out there" again.

Along with being thankful for the restorative care given me by medical professionals and especially by my dear Sandy, I cannot help but be more mindful of the vast number of people whose medical conditions are so much worse, circumscribing their ability even to walk, much less drive a motorhome around the country.  I never really appreciated what it might be like to lose a limb until after the fall when my arm could do nothing but hang limp at my side preceding surgery. I am so blessed compared to so many, and my heart goes out to those whose mobility is permanently impaired.

The following photo will give you some idea of my progress after a couple months' therapy after the surgery. Instead of my right arm hanging lifeless before, I can now reach up to Phannie's door lock with little effort. For those of you who have had this kind of surgery, you know what a victory that is...and it's getting better all the time: 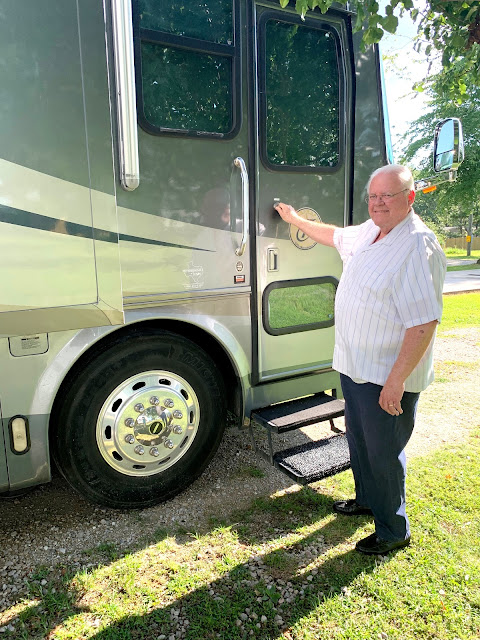 We were excited to meet up here in Lebanon with our Arkansas friends Carolyn and Larry, who are also gospel music fans. They are fun to be with, and we always have a lot of laughs: 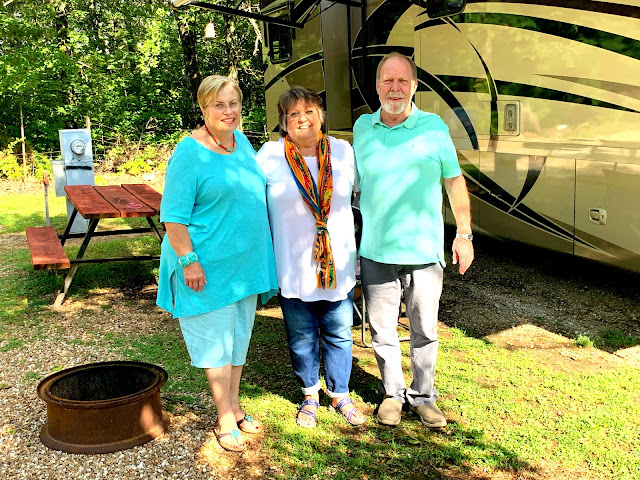 The concerts have also been great. The Collingsworth Family, one of our favorites, was here, among others, and gave a fine performance:

We will be leaving here on Sunday and join other longtime RV friends in Hannibal, Missouri. Most of these folks have come off the road for various reasons, so we don't get to see them as often. This will be a very special time for us.