We have certainly enjoyed our stay in Yuma and the near perfect weather, with daytime temperatures in the seventies, low humidity and endless clear blue skies. We see the weather reports from other parts of the country that are snowbound with single-digit temperatures, and we can't help but feel a little sorry for those, including our friends, who have been caught up in that. We know they would like to be in a place like this, and we miss them.

Yuma has been on the grow, with the addition of a fairly new mall and a beautiful new city hall that contains something of particular interest to me, but more on that when we go inside. 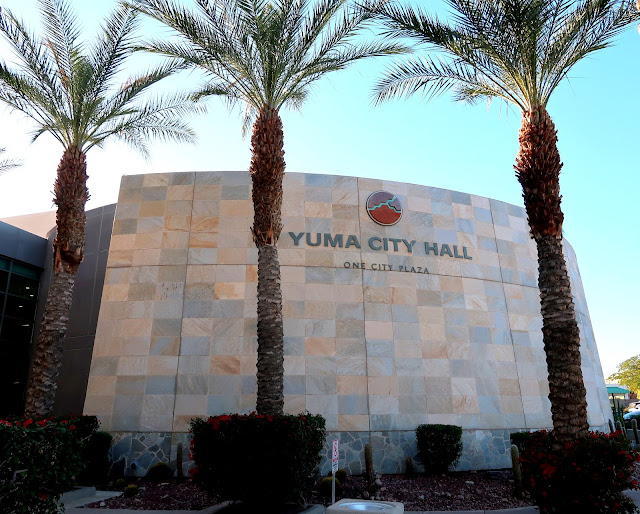 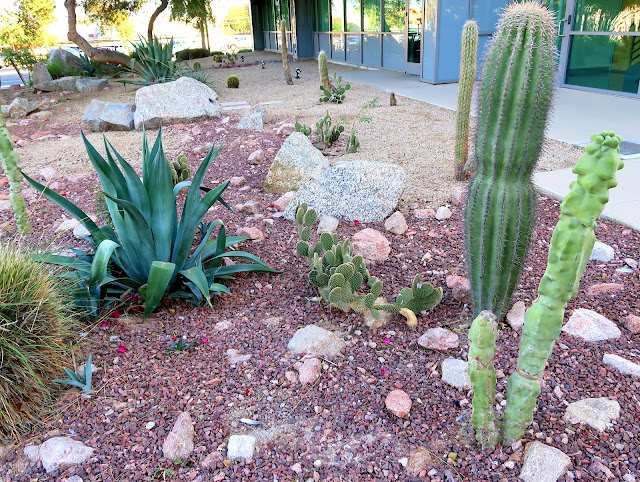 As in previous photos in these posts, I found the landscaping at Yuma City Hall artfully done and appropriate to the desert setting. I knew there are many varieties of cacti, and there is no shortage of these on display here. I really find them interesting and beautiful.

Here's what caught my attention immediately upon entering the lobby of city hall: 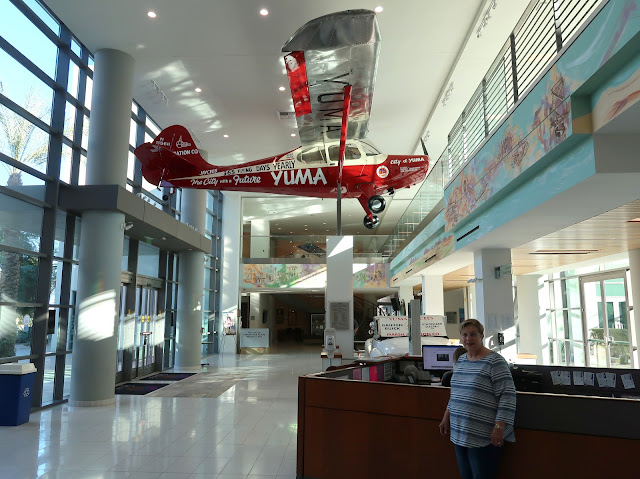 Hanging from the ceiling was an airplane, a 1949 Aeronca Sedan named "City of Yuma." This was a particularly awesome sight to me, since this airplane is very similar to the 1949 Aeronca Champion, the first airplane I ever flew, and in which I soloed in 1963, a seminal event that developed into a career as a pilot that has been deeply enjoyable and rewarding. In fact, I have the good fortune still to do some flying even now, some 57 years later!

The Sedan model of the Aeronca airplane was a four-place version, while the Champion held only the pilot and one passenger, seated in tandem rather than side-by-side. It was also flown by a control "stick" rather than a wheel or "yoke" to move the elevator and ailerons. Such fond memories I still have of that exciting event so long ago!

The "City of Yuma" was placed in this hall to honor a record-breaking endurance flight in 1949, wherein two pilots flew the airplane around Yuma without landing for 47 days. Now, you're probably asking, "How did they do that?" Well, in as few words as possible, the pilots, when new supplies were needed, flew in slow flight over a runway, the airplane's speed matched on the ground by a 1948 Buick convertible, from which fuel, oil, food, drink and other essentials were passed up to the pilots three times a day. That's over a thousand hours aloft for those pilots, and it brings to mind all kinds of questions, especially as to how they took care of the human factors that would naturally be involved. If you would like to read an interesting article about how and why the attempt was made, you can find it here.

Located below the airplane in the city hall lobby is the very 1948 Buick convertible that was used to race along underneath to supply the airplane: 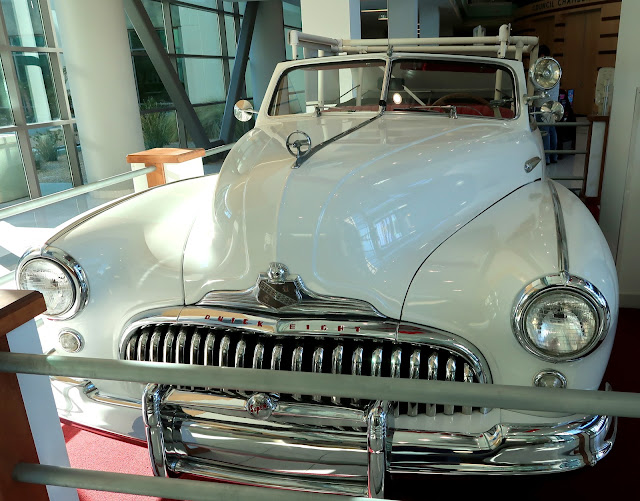 The event was sponsored by the Yuma Jaycees, who wanted to bring attention to the federal government about the near perfect flying weather at Yuma. The national attention brought about by the event did, in fact, result in considerable federal money subsequently being spent on a U. S. Marine flying base and a military proving ground here in Yuma. The stunt was re-enacted some years later (but not for 47 days), and here is a photo taken during the re-enactment. 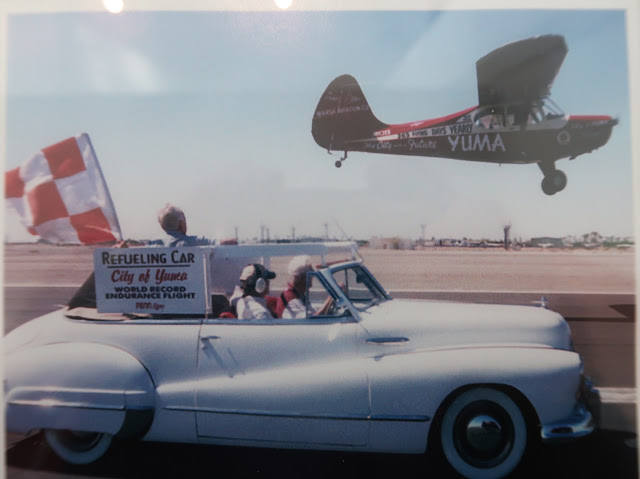 So, we add this to our list of cool things we wouldn't have known, had we not made the decision to be vagabonds for a while--by coincidence, starting our fifth year as such this very month!

After several pleasant encounters with Ray and Cindy, as I mentioned in an earlier post, we had the good fortune of being contacted by Dan and Peggy, more bloggers we've read for years. They invited us to go with them to one of their favorite Yuma restaurants, the A&R Grill, where I had a sublime southwest chile cheeseburger, and Sandy had some very tasty fajita tacos: 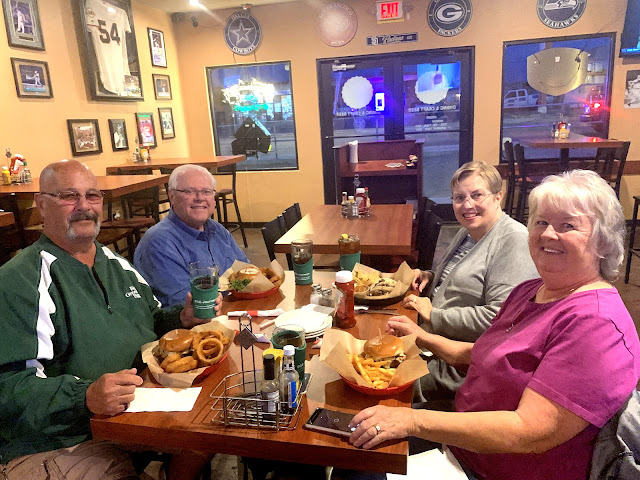 We knew from their posts that they liked the Yuma area so well that they purchased their own RV lot here. They invited us out to see it, so we did, not knowing that we got there on Dan's golfing day, so we missed him. Sorry, Dan, but we'll see you next time. Peggy was nice enough to show us around: 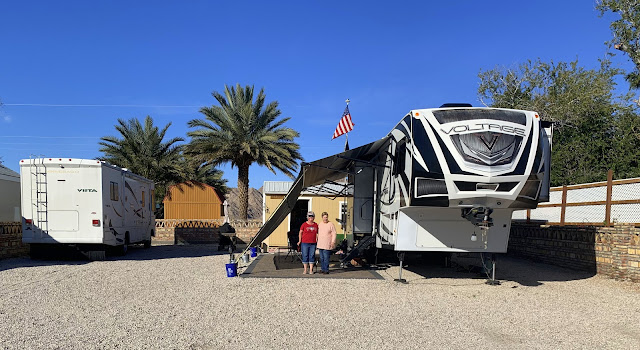 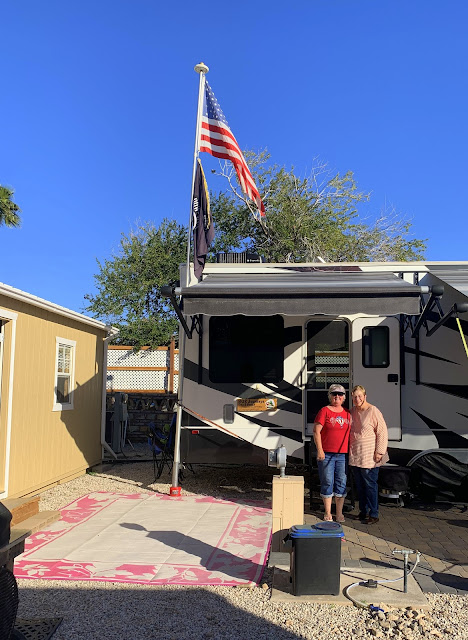 Theirs is a huge lot, and they have a nice storage shed at the back. There's even room for a friend's RV to be stored there for a while. In the poorly-composed photo above, I just barely included the edge of Dan's Big Green Egg cooking center. Cooking everything imaginable in that huge smoker, he is a master BGE chef, and they even take it to rallies to be with other members of their BGE groups. I really didn't know what a big deal it was until I saw Dan's and read some of his stories. You can find Dan's blog here.

With this pleasant experience, we're going to say goodbye to Yuma, ever impressed with its status as a winter playground for snowbirds. We were going to drive to Quartzsite since it is nearby but, instead, we think we'll stop there on the way back from the west coast after things have died down a bit from the Mecca-like RV swarm that occurs there every January. We're not all that fond of crowds, anyway, but we're going to stop there, so we can say that, as RVers, we have been to Quartzsite at least once, even if we are a little late to the main confab.

From here, we're headed to Palm Springs, California, for a couple of weeks, so we'll continue to report from there on our winter trip in the great Southwest. By the way, we've already started planning our summer trips, one of which will include Colorado and Wyoming beginning in mid-July, and we already know we'll be meeting up with friends along the way. In fact, we'll be joined by some good friends in their rig, doing a caravan with us for much of that trip. We don't often get to do that, so we're really excited. We'll have more news on that adventure when the time gets closer.