More From Yuma, and I Get My Ears Thumped Again

Well, it was only a few days ago that I got my ears thumped after a post and now, here we go again. Imagine my embarrassment when I learned that Ray and Cindy Warner of Ray and Cindy's RV Travels blog have a home here in the very park of whose inhabitants I was, um, a little critical. Not only do we love to meet fellow RV bloggers, but Ray and Cindy invited us out for lunch at an outdoor taco joint that had some killer shrimp tacos. We enjoyed it immensely, and then they invited us into their beautiful home for a tour! There never were two nicer people, so, basically, I ate crow for lunch along with my tacos!  Why do these things happen to me?  That's Cindy and Ray are on the right below: 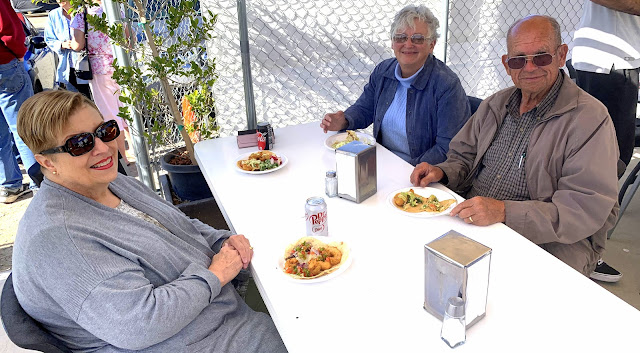 In the days prior to learning about Cindy and Ray, we were told by friends that we needed to go to the Yuma Territorial Prison State Park. "It's more interesting than you might think," they said. I'm sure I rolled my eyes a bit but, hopefully, not enough for them to notice. I don't know...it's just kinda hard for me to get excited about touring a prison. It's certainly not a place I would wish to go as an inmate, so why would I want to pay to go visit one? Yet, it's the number one attraction for Yuma in Trip Advisor, so there we went.

Now an Arizona state park, I have to say that the Yuma Prison complex is very well done. Two really decent photos in the previous post were taken there, those being the shots of the cacti and the old wagon. The place is steeped in history, having been built in 1875 as the Arizona Territorial Prison, way before Arizona became a state in 1912. During its 33-year lifespan, the prison would house over 3,000 men and 29 women for crimes ranging from murder to polygamy and even adultery. Only one inmate was ever hanged there--for murdering another prisoner.  The prison was under a constant stage of construction to enlarge it, mainly using the labor of the prisoners, who were building their own cells. It was known among prisoners as the 'hellhole' because of the unbearable summer heat they had to endure.


I found a cell door open and, ever curious to go along with being slightly stupid, I decided to go inside. It had a dirt floor and six bunks, stacked three on each side of the cell, with a single chamber pot for relieving six guys. (Ugh!) Of course, Sandy would close the door once I was inside but, fortunately, she couldn't lock it; she just held it shut. All it took to get free was to hand her my American Express credit card. Works wonders, that thing. 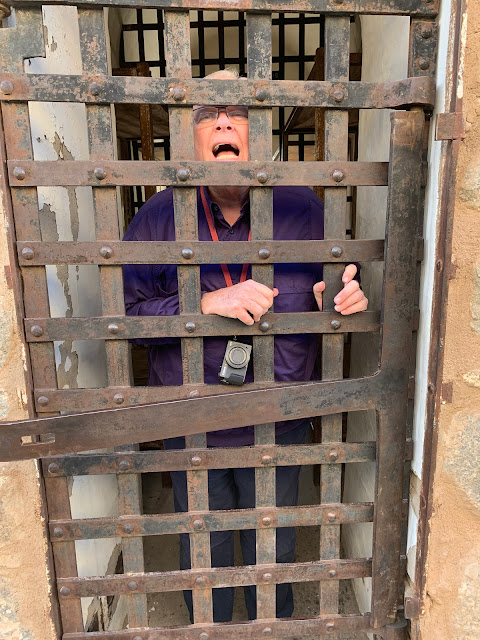 If a prisoner got out of line, he would be placed in a cage outdoors, where he would have to endure either boiling sun or rain, with no protection from either: 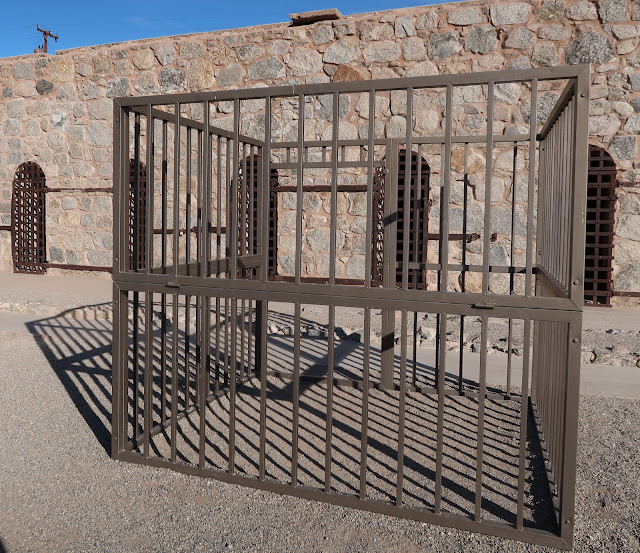 Prisoners who were really incorrigible were sentenced to weeks-long stays in this same type of cage, except it was housed in a totally dark room carved out of a mountain at the edge of the complex. Such prisoners were stripped to their underwear and fed bread and water. There were no provisions in the cage for the removal of bodily waste. It is said that several inmates went insane from this experience; I don't doubt it. Here are some photos of the dark cell:

The building housing the museum was quite interesting, since I haven't spent much time around prisons, thankfully.  Here are some of the things that piqued my interest: 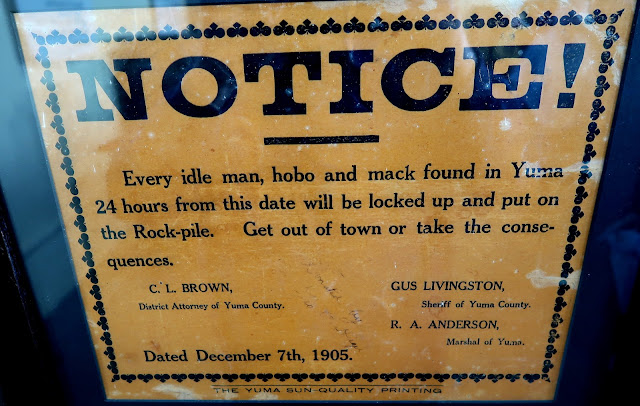 The notice above was posted in Yuma by the territorial authorities in 1905. Looks like they meant business, and I guess the ACLU wasn't around then. By the way, the word "mack" back then meant "woman chaser." 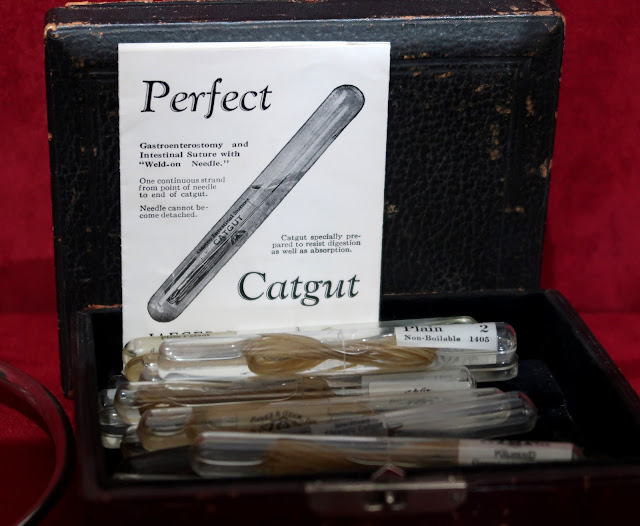 Strange things interest me, I guess. The photo above shows a kit containing catgut, used by surgeons for sutures during operations in the day. Although the prison was known as the 'hellhole' by prisoners, it actually had fairly up-to-date medical and dental care for the inmates. I had heard of catgut before, but I really didn't know what it was. Actually, it was not made from cats at all, but mostly sheep intestines. Their use for suturing wounds was desirable because they were pliable and strong and, within a week, they would be absorbed into the patient's body, if he lived through the operation. The problem with using catgut was the difficulty of sanitizing it so as to avoid creating an infection within the patient--one that was often fatal. Catgut eventually fell out of favor due to this problem. 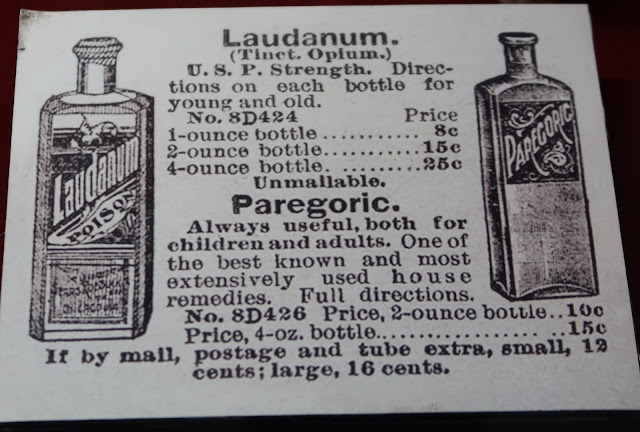 The old photo above jarred me a bit, because I remembered that my mother had given me paregoric as a child as a treatment for diarrhea and probably other ailments. It was available over the counter back then, but began to be regulated around 1970, as it contained opium and 45 percent alcohol; to my surprise, it is said to be available by prescription even today. It's big brother, Laudanum, was similar in composition but contained 25 times as much opium, so it made a fairly effective anesthetic, as I suppose the prisoners taking it didn't really care what the surgeon was doing to them.

Laudanum was widely available by the 1800s and was highly favored in social circles for its mood-enhancing properties--perhaps it was the 'cocaine' of yesteryear.  Medically, it was prescribed for all sorts of things, including headaches, cough, gout, rheumatism, diarrhea, melancholy and "women's troubles." Being unable to have women's troubles because of my gender--the one I had at birth--I'm not going to speculate about what these troubles might be.  However, being married to a woman, I have a vague idea. But I see no reason to risk speaking of them here.  So, if any of my readers suffer from this malady, you should know that Laudanum may still be available by prescription and could make you forget those troubles. One caveat though--Laudanum is highly addictive, and with the recent attention to the opiod problem in the U. S., it probably won't be around for long, and it may have been banned already. Both drugs were used widely in treating inmates in Yuma Prison.

Also in the museum were a ball and chain, placed on the ankles of prisoners who gave trouble, especially those who tried to escape. I hadn't seen one of these before, and I don't think I would enjoy wearing it: 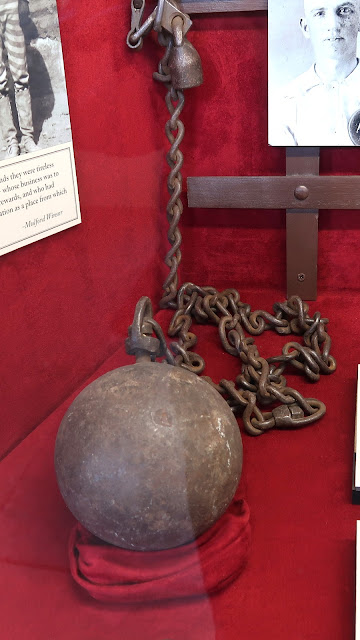 Something really sobering was this hangman's noose, used only once during the history of the prison. The photo below this one is a blowup of the card visible in this photo. It describes the grisly details of preparing for a hanging: 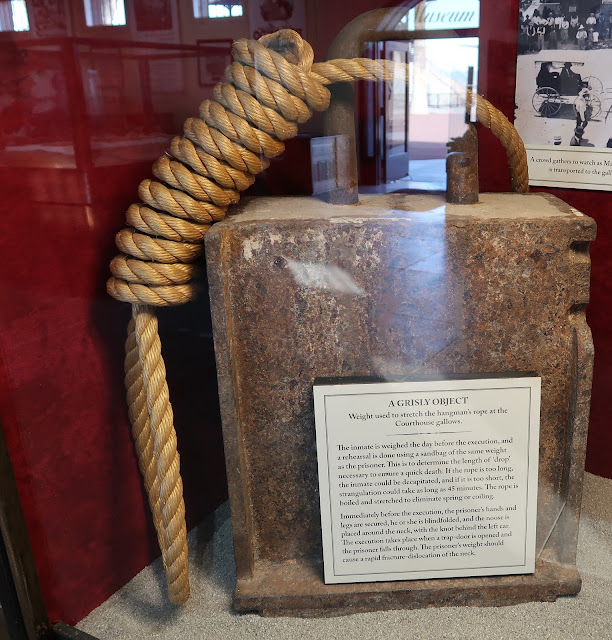 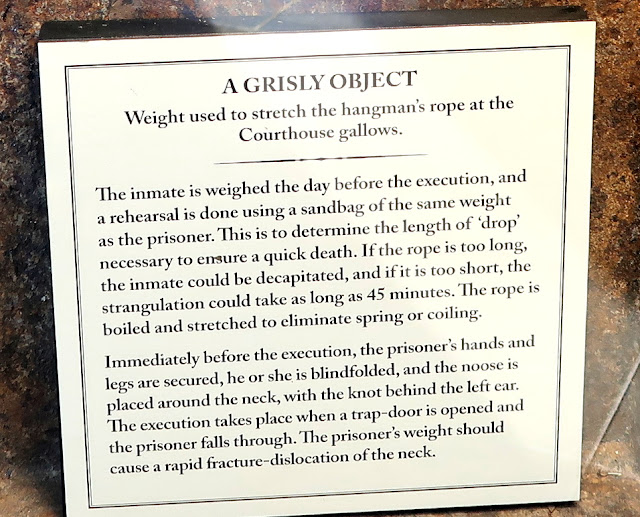 Also in the museum was a Gatling gun, the first I had seen. It was never used in the Yuma prison, but it was an interesting piece--the predecessor, I suppose, of the machine gun. It fired a clip of thirty 50-caliber bullets by turning a hand crank to rotate the barrel assembly. Oddly, at the time of its invention, it didn't receive much interest from the armed forces, and the Lowell Company, it's maker, went bankrupt. 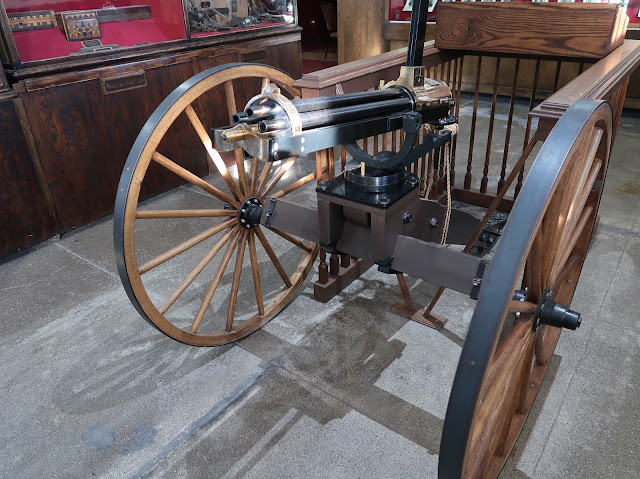 There's a large guardhouse outside the prison that now serves as a lookout point for visitors: 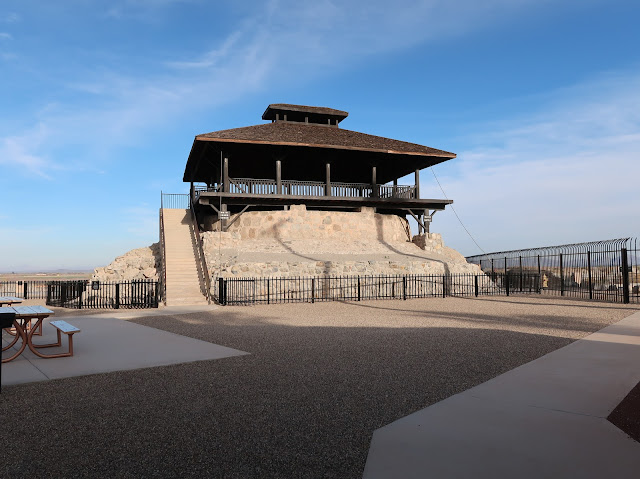 Here's a shot taken from the observation deck, in which you can see a small segment of the Colorado River that passes alongside the prison: 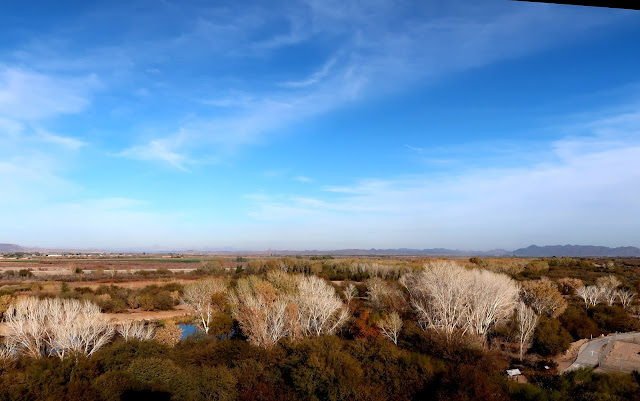 I couldn't resist getting a photo of this pigeon (at least I think it was a pigeon; if not, maybe you ornithologists can help me out) guarding this section of the Colorado River. He/she? let me get quite close before puffing up, which I supposed was to appear more fearsome. Or, maybe it was just mimicking the old fat guy taking its photo, who knows?

The prison closed in 1909 due to overcrowding and fell into a state of disrepair until it was rescued from destruction by the citizens of Yuma. It became a state park in 1961. I have to say, it was worth the six-dollar entrance fee.

I'll have more from Yuma in the next post but, right now, we are loving the beautiful weather out here.