Leaving Texas - I Get My Ears Thumped

It's not often that I get smacked for one of my posts but, I must admit, I deserved this one. A few of the folks leaving comments on my last post took me to task for my characterization of U. S. 90 being 1) ugly, 2) lonely and 3) boring through far west Texas. My use of numerical points made it worse, as if I were emphasizing my negative observation of the area.

I must say that I knew better. As a native Texan, I was aware of the need to be very careful about pointing out any blemishes on our glorious state, even though there are parts that are more picturesque than others. It didn't seem to matter that, in previous posts, I almost always used the adjective 'glorious' when I mention my storied state that I do, indeed, love.

Well, it didn't take long for the chastening to begin among those who left comments. (God bless you, by the way; I love to get comments on my posts.) I could almost imagine some of my Texan brethren who read this saying, under their breath, "Get a rope." My only excuse, guys, is that I was tired. We were doing one-night overnights, taxing as those are to us old folks, and it was late at night when I was writing the post. I apologize profusely for the heresy.

With perhaps the most colorful and compelling history of any state, full of gallant heroes of Texas' independence at battles such as the Alamo, Goliad and San Jacinto (one of my own kin died at Goliad), Texas should never be spoken of in the terms I used but in hushed tones of reverence. If I felt compelled to describe things as I did, I should have used gentler terms like "less beautiful" and "undisturbed by man" and "an opportunity for solitary contemplation."

Let me assure you that I consider my birth in Texas, although I had no say in it, was a gift that I do not take lightly. As a native son of Texas, I revere every inch of it and take no small degree of pride in telling folks of lesser states (which are all the rest of them) that I am a Texan by birth. (Now those friends of mine who are adopted Texans should not get their feathers ruffled; they can't help it that they weren't born here, and most of them would make fine Texans--all except you, Bob L. (You know who you are.) But we'll take Janet anytime.

In one comment, someone pointed out that we missed many subtleties of beauty and interest by racing through west Texas as we did, and I do acknowledge and regret that--although we have previously done a fairly good tour of the Big Bend area several years ago--which can be found by searching on "Big Bend" in the search box on the right column of this blog. Had it not been for trying to make schedule in Arizona, I assure you we would have been more leisurely of pace and contemplative of our surroundings as we drove through my great state.

I hope these mea culpas are sufficient, so I will get on with the rest of my story about heading west. It wasn't long after leaving Marathon that we passed through Alpine, so named because of its elevation of about 4,500 feet, one of the highest towns of any size in the state. It's a very nice place, home of Sul Ross University, and I would just have you refer to "Alpine" in the search box for more observations of Alpine.

Highway 90 then led us toward Marfa, one of my favorite places in Texas, for several reasons. The 1956 movie classic, "Giant," was filmed nearby, starring Elizabeth Taylor, Rock Hudson and James Dean, all of whom actually stayed in a hotel at the little town during the filming. It's also has a trifle of oddness, as it has become home to an artsy-type community--folks who are a little different and whose appearance seems curiously out of place here in far west Texas.

I am possibly even more fascinated by the mystery of the Marfa Lights, a phenomenon dating back to 1883, when a young cowhand reported seeing orbs or pinpoints of lights out in the uninhabited desert east of Marfa, where there was nothing that could possibly produce light, except perhaps for fire, but these lights are not produced by fires, which would be readily discernible. I find this even more fascinating because I have actually seen these lights myself from the wonderful viewing stand on U. S. 90 that was built by the state. (Again, search on "Marfa Lights" in the blog or read about them in Wikipedia.)  Here are some photos of the viewing stand that I took as we were passing by. When night falls, there will be quite a number of people here looking out into the desert:


As you can see, there is no structure or road anywhere in view--nothing that could possibly produce a light. You can check this out with a telescope provided on the viewing deck or with your own binoculars; but you won't see anything but miles and miles of nothing. Yet, if you're lucky, you may come back and see the lights on a dark night. When I saw them, they looked something like automobile lights--but too far apart to be on a single vehicle, and they appeared to move in different directions. If we hadn't been in a hurry on this trip, I guarantee you we would have come out here on this night and taken another look. The lights, to this day, have defied explanation.

Marfa is a quaint and tiny little town where it defies the imagination that movie stars of the caliber of those appearing in "Giant" would have stayed during the filming. Again, check "Marfa" in the search box for more information about the city and the hotel in which they stayed. Leaving Marfa toward El Paso, we got to see something we hadn't seen before: A roadside diorama of some of the main characters and the main house of the movie: 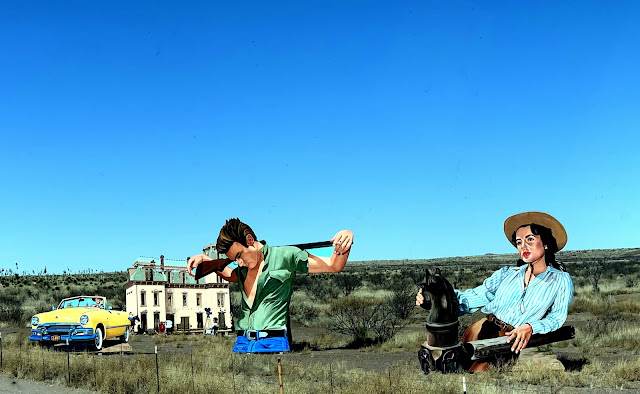 As you can see, the figures of James Dean and Elizabeth Taylor seem to be three-dimensional and almost real, as does the '53 Ford convertible and the facade of the main house of the Reata ranch, as it was named in the movie. I don't know who constructed this piece of art, but we thought it was marvelous.

Farther down the road was a tethered white blimp brimming with electronic gear and used by the border patrol to watch for low-flying airplanes crossing the border from Mexico. This used to be a popular transport method for drug smugglers, but not so much now that there's so much electronic surveillance: 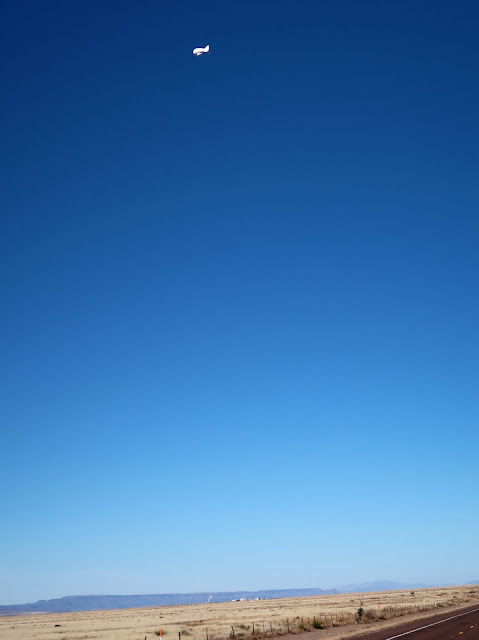 The rest of the drive through my glorious Texas was uneventful, including traversing bustling El Paso, a passage made fairly easy by using the north loop through the mountains. We stayed the night in Las Cruces at the Voyager RV Park--pretty basic, but cheap with Passport America, as was the Marathon RV Park, where we stayed the night before. If we're just doing a single overnight, we try to find the cheapest safe place possible, and we don't even put out all the slides. We just stop, eat, sleep and go.

After crossing into Arizona from New Mexico, we were excited finally to see some mountains in the distance, as in this shot of Mt. Graham from near Safford, Arizona: 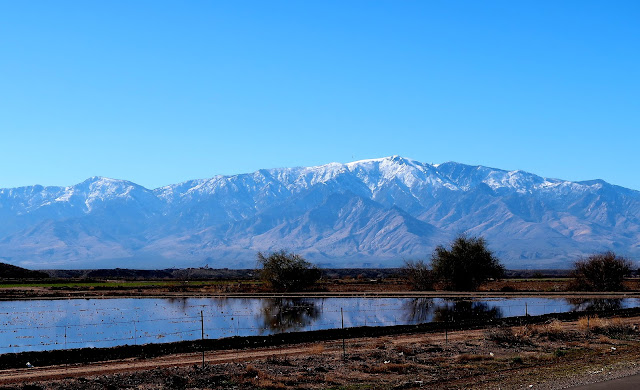 Spending my childhood in relatively flat and heavily forested east Texas, it was always exciting to see the first real mountains during our family vacations to the western states. That's because we couldn't see anywhere but 'up' there among the tall pines where we lived. Out here, you can see for a hundred miles on a clear day.

It was as we were nearing Mesa, our destination for a few days, that the scenery really began to be interesting, especially as we passed through the Superstition mountain range, where the giant boulders and abundant saguaro cacti began to appear.  Here is a shot of Superstition Mountain from the western side, taken from Apache Junction, not far from our RV park: 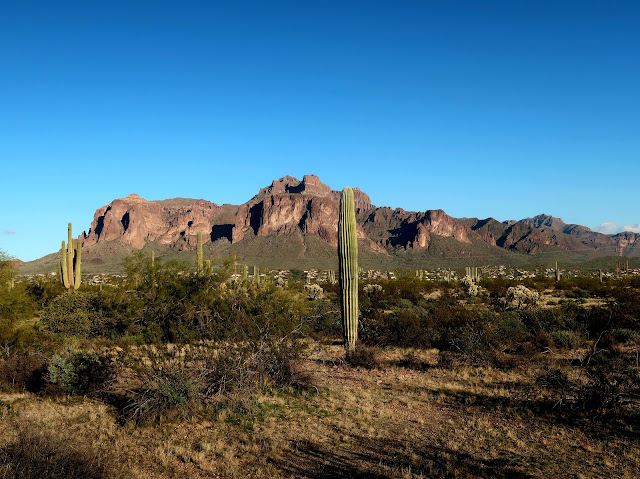 The origin of the mountain's name is not entirely clear, as there are several versions--the most popular being that the Pima Indians, who were indigenous to the location, reported strange sights and sounds coming from the mountain and the disappearance within of some of the tribe members. They also thought it contained a portal to the underworld. Thus, due to the superstitions of the tribe, it began to be known as Superstition Mountain.

I really enjoy the unusual desert plant life, especially the saguaro cactus. Here is another pretty but unusual plant I saw nearby; I think it is a cholla: 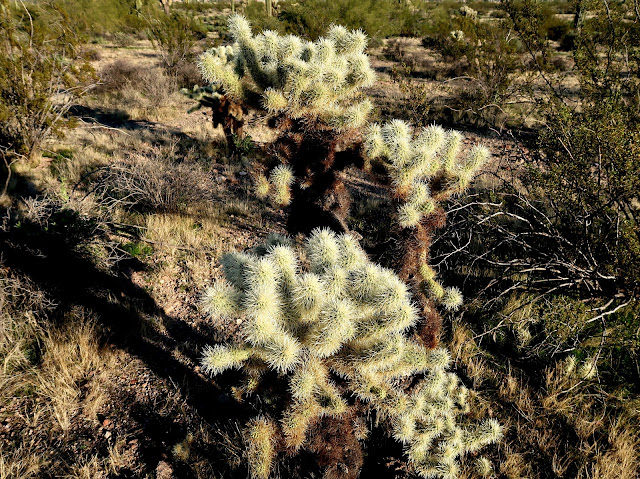 We spent our three nights resting up at Monte Vista RV Resort, a very nice place that houses hundreds of snowbirds in a part of the resort that has deeded lots. They are also putting the finishing touches on a new RV park with 200-plus sites next door. Below are some photos of the place. I am adding it to my 'Best of the Best RV Parks' page.


I was delighted to discover that the grand ballroom at Monte Vista has a grand piano, as did Victoria Palms in the Rio Grande Valley, where we stayed last winter and where I was able to do some playing. In fact, it was because of the presence of this piano that we have decided to return here to Monte Vista for a longer stay in February. Gotta get some more practice since my shoulder has healed up!

While we were here, our best restaurant meal was at a nearby Thai restaurant that I have just listed on my favorite restaurants page.

Sandy used the downtime to do some laundry in between shopping trips, and I took care of some little chores that needed to be done on Phannie. So, we are off in the morning to Yuma, a place we've never been, but we'll have two weeks there to check it out, then on to California (God help us).