Yuma - For the First Time


Before I get into my observations of Yuma, I would like to express my condolences to the family of fellow fulltiming RV blogger George Yates, who wrote  Our Awesome Travels and lost his battle with cancer a couple of days ago. Although we had never met, we had become cyber friends, and I wish we could have met in person. The RV blogger world is not a large one, and he will be missed as a true gentleman and active writer among our group. May God's comfort be yours, Suzie.

I guess it's odd that we've traveled as much as we have all over the U. S. and abroad but somehow never made it to Yuma, Arizona, yet it's true. Furthermore, had it not been for a super special introductory rate offered by the Palms, we may not be seeing it now. But here we are, and I've already made some interesting observations.

First of all, Palms RV Resort is a luxury RV park, for sure--you know, one of those hoity-toity places where you have to send a photo of your rig if it's over ten years old. Well, Phannie's age is certainly beyond that but, apparently, they didn't think she looks like a junker in the photo I sent them, so they said, "Come on down!"

Now, I must tell you that I have mixed feelings about this kind of snootiness. I understand that high-end parks cater to a certain kind of clientele--usually ones with deep pockets--many of whom really don't like having unsightly rigs around them, spoiling the neighborhood. In order to keep the well-heeled coming back, parks like this one let these customers call the shots, so I get it; that makes some business sense, even if it is off-putting to most regular folks. I must confess that I would prefer not to have parked next door to me some rig that is a truly dilapidated eyesore and perhaps even unsafe to be around. I couldn't help but wonder who or what might be inside.

On the other hand, it is a bit of a downer to realize that Phannie could be thought of as elderly to the point of being unwanted when, to me, she is a well-loved classic that has aged gracefully. I have cared for her to the best of my ability, overdoing the manufacturer's recommendations in some cases. I give her frequent washings and waxing when needed. In turn, she has served us faithfully, with nary a hiccup from her Caterpillar engine and Allison transmission in nearly a hundred thousand miles. I just don't know if we could ever part with her. She's family.

There's one more thing that we've noticed about luxury RV parks: They aren't very friendly. I'm not talking about the staff, who are very friendly and helpful here. I'm talking about the other RVers, many of whom seem to go out of their way to avoid eye contact and certainly don't come over to visit, as if we are alien creatures from another galaxy. Maybe it's the Texas license tags, and they are afraid of all the guns they assume all Texans have. Well, that may be a valid assumption, but we really go out of our way to avoid shooting visitors.

It says a lot that we have met some of our best friends at discount parks or ones that are mediocre, at best, where no one cares about the age of your coach but instead looks for the size of your smile and the warmth in your heart. Those are our kind of people. In any case, we certainly won't be returning here to the Palms, so we'll leave a few photos to remind us of what we're not missing: 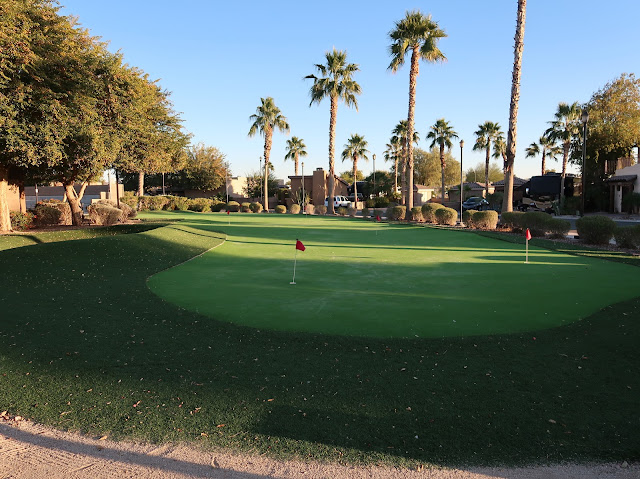 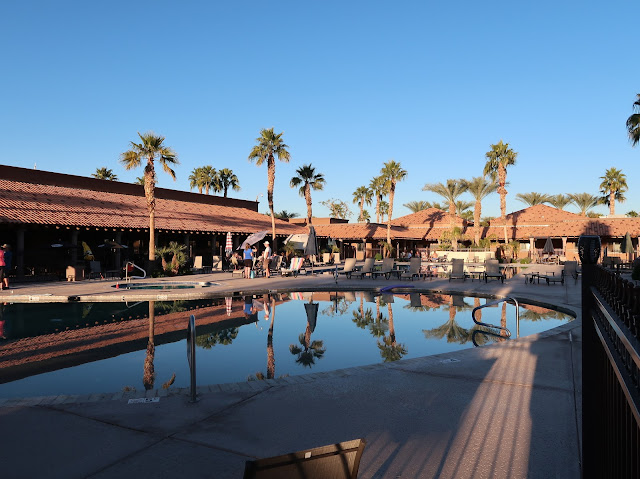 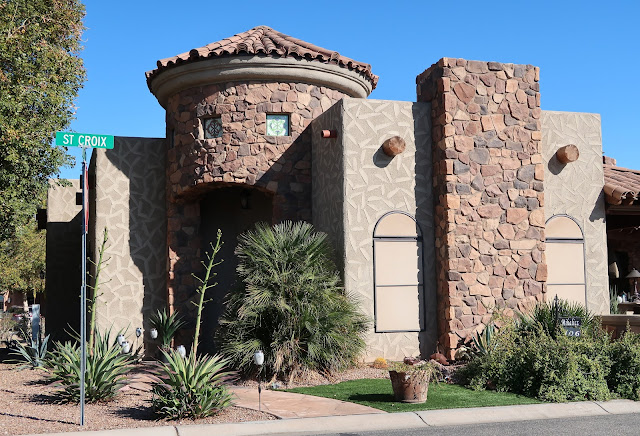 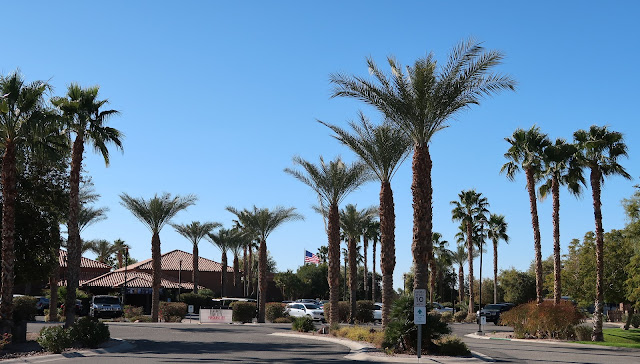 Okay, that's about enough of Camelot; let's get back to Yuma itself. I now know why this is such a haven for snowbirds, and I'll talk about that in a minute. But first, here's a screenshot from Google Earth showing, from what I would guess to be about 25,000 feet, an uncountable number of RV parks along I-8, the main artery feeding Yuma. 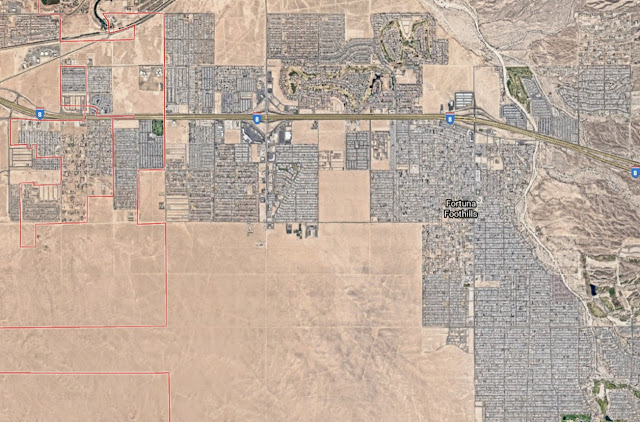 There are a few housing additions in this photo but, if you zoomed in, you'd see that most are parks with RVs, park models and other cramped-together snowbird roosts. Outside the perimeters of the photo are many more. So why the mass migration influx in the winter?

It's the weather, of course; and what great weather it is! Almost every day boasts clear blue skies with temperatures in the seventies, cool nights, with very low humidity. And, unlike the Rio Grande Valley, it's not often windy. For example, look at the photo below--specifically at the flag in the center, drooping down the flagpole. This was a very typical winter's day in Yuma, with the temperature a perfect 72 degrees. Having said that, this is not a place I would want to be in the summer. That's why the snowbirds blast out of here in the spring as if they're fleeing a hurricane. It gets HOT! 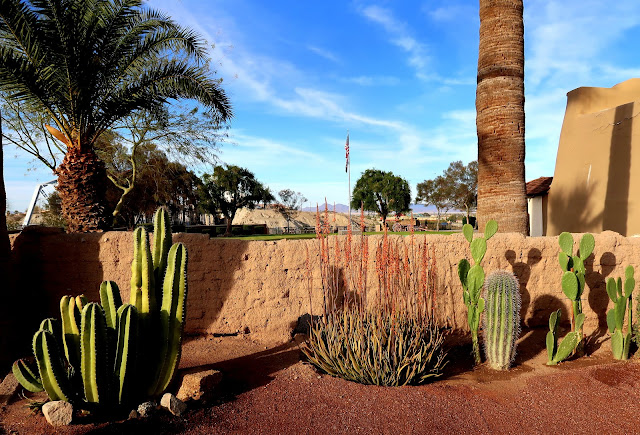 And I don't even need to mention the beauty of the rest of the photo above, especially the cacti juxtaposed against the bricks and stucco--a look that east Texas forest creatures like me find particularly attractive because it's so different from where I grew up. This landscaping was obviously professionally done, but many homes, businesses and government buildings have similarly attractive landscapes. Here's an old wagon used in landscaping at the Yuma Prison State Park, about which I'll cover in another post: 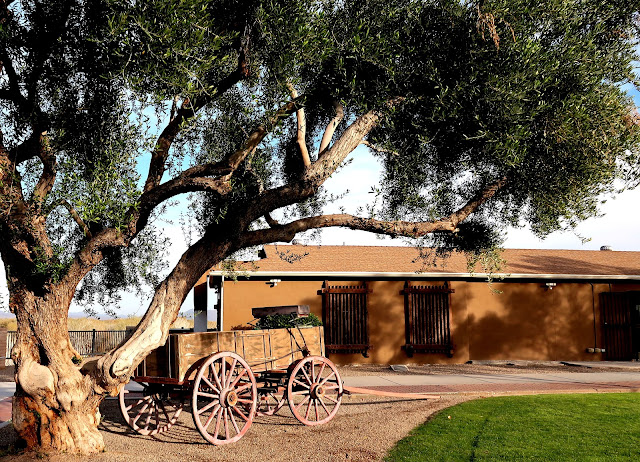 Well, there's a good bit more I have to share about Yuma, but that'll appear in the next few days.