At the Butte KOA, Butte, Montana...

We hadn't planned to overnight in Butte. In fact, we hadn't planned to leave Yellowstone a day early; but we did. Several things factored into our decision. First of all, there was Mae. This faithful little car announced via a "check engine" light that something was amiss. This has been one of the most trouble-free vehicles I have ever owned so, while it was overdue for something to break, it still came as a mild shock. Considering that we've dragged that poor car behind Phannie all over the U. S. for four years and driven her 50,000 miles under her own power, I cannot possibly complain. I just wish Chevy still made the HHR.

I asked the only garage in West Yellowstone to take a look, but they were booked up, and I didn't think it a good idea to take Mae back into the park, where there certainly is no service possibility in case of a breakdown. We also reassessed our Yellowstone visit and determined that we would need to come back in the late spring or early fall sometime in order to avoid the near gridlock of tourists during the summer.

Since Butte had the nearest Chevrolet dealer on our route, we slipped out of Valley View RV Park and enjoyed greatly the 175-mile trip through some pretty country in very light traffic. (A wonderful benefit of road trips in the West.)

Soon after we arrived at the Butte KOA, we drove Mae to the Chevy dealer without an appointment. They hustled Mae into the shop right away and, in about an hour--voila'! The check engine light was off and they also took care of a recall on the air bags. The problem identified by the check engine light? It was a camshaft position sensor--whatever that is.

Since it was still early in the afternoon, we decided to do some sightseeing in Butte. Its most obvious claim to fame is its proximity to a huge copper-mining operation formerly known as Anaconda, and now, Montana Resources. The location of the open-pit mine east of town is unmistakable, the mountains there having been eaten away by giant earth movers.

The city proper is splayed up the side of a mountain upon which the original copper mine was dug along with several others in the late 1800s. Much of the downtown architecture is from that era, and much of it has been remarkably preserved. I had the impression I had been transported 100 years back in time, and I almost had a vision of what this rollicking town would have been like with the horses, saloons and brothels that served the hardworking miners when they were not down below.


Our interest in the mines piqued, we stopped by the Berkeley Pit, a gigantic open pit mine begun in 1955 and abandoned in 1982. During those years, some 4.5 billion tons of earth were removed to produce about 1.5 billion tons of copper ore. In 1982, the miners went on strike and ceased operating the giant pumps that kept ground water from filling the pit, which had grown to a mile wide and nearly a mile deep. The ground water eventually filled the pit, and the surrounding minerals leached into it and made the water incapable of supporting life. It is so toxic that any waterfowl landing on the water seals its  doom, right then and there. It is now an EPA Superfund toxic waste cleanup area.

I was surprised to learn that hundreds of miners lost their lives in the mines over the years. I guess I didn't realize the numbers would have been that high.


After touring the toxic pit, we were a bit hungry (that sounds odd, doesn't it?), so we stopped by The Montana Club, where we enjoyed immensely one of their rib eye steaks that was large enough for Sandy and me to share. With garlic butter on top and a side of shrimp scampi, it was a hit! This restaurant will certainly be included on my Favorites list.
﻿﻿ 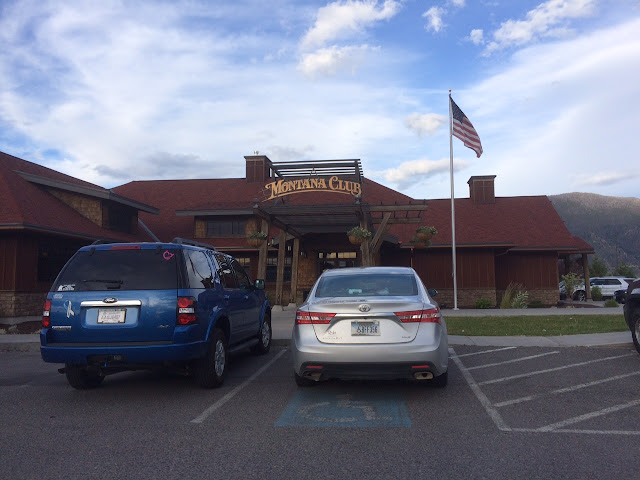 
Thank you, Lord, for this wonderful life, and please forgive me if I don't
appreciate it enough each day.