I'm becoming painfully aware of the limitations of an iPad when it comes to posting to my blog. As some of you may remember, my MacBook was stolen last year in Pigeon Forge, and I replaced it with a Dell all-in-one PC that lives permanently in Phannie. I like the large screen, but it is not portable. I rarely need a laptop and figured the iPad would suffice for those few times when I need a computer outside of Phannie. So far, that has proven to be true, except I've found that posting to the blog and dealing with photos is annoyingly clumsy on the iPad and, while wireless Internet is available all over the ship, it gets quite slow at times when it's in heavy use. I'll just add the photos when I get back to Seattle.

The stop in Juneau was dampened--if you'll pardon the expression--by persistent light rain, low clouds and fog. Nevertheless, we were able to leave the ship and look around Alaska's capital city . Complicating matters was the docking of no fewer than four cruise ships at the same time, disgorging some ten thousand tourists on the  small town. As you might imagine, it was a huckster's dream. It was like a feeding frenzy among the many shopkeepers along the narrow streets. We were struck by the large number of jewelry stores; I guess a lot of cruise passengers are a bit more well-heeled than we are.


Juneau is the second largest city in Alaska and the capital, of course. Here's a photo of the main drag; notice the clouds obscuring the mountains in the background: 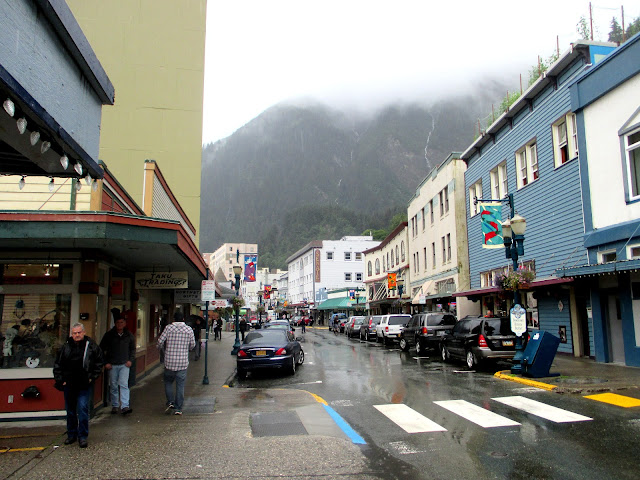 Always on the hunt for fresh seafood, we stopped in the Twisted Fish Restaurant for some fish and chips and fish tacos--halibut, of course. These were very good but way overpriced, thanks to the restaurant's proximity to the docked cruise ships. 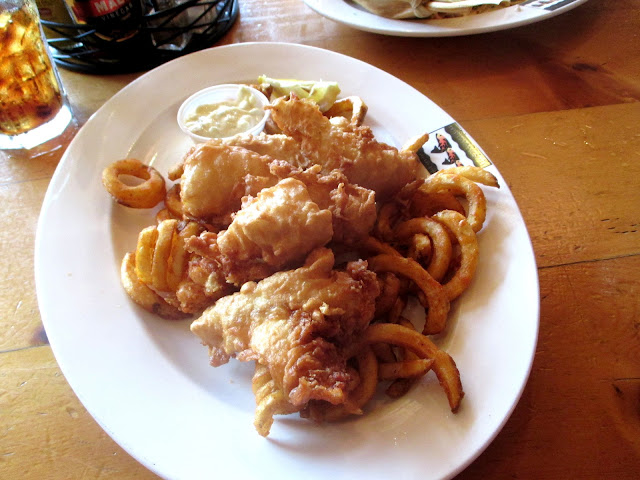 Had we only known, we could have walked a short distance toward town and found local street vendors selling the same food for one-fourth the price. The vendors were cooking and serving from food trailers and even had covered areas for patrons to sit. It would have been a cool lunch venue, so we wish we had waited a bit and cased the place before deciding where to eat.

After walking around quite a bit, we returned to the ship. The rain and cold made the experience somewhat less pleasurable than it could have been.

Thank you, Lord, for this wonderful life; please forgive me if I do not appreciate it enough each day.
Posted by Mike Mills at 6:39:00 PM