Reader alert! This post has lots of references to RV technical subjects that may be a trifle boring for some folks. For example, I'm not sure Sandy read all the way to the end before her eyelids banged shut. But guys--rejoice! This is for you.

One of the neatest things about RVing is the crossing of paths with some really interesting people. This will be the third post from Salt Lake City in which I have written about new friends we have met. And finding engaging neighbors is not confined to this location; we see them all over the country. I'm convinced that RVers are some of the friendliest people on the planet, and why not? Most with whom we come in contact are retired and free-wheeling to wherever they wish with little in the way of cares or obligations. Why wouldn't they be happy?

Having our obvious common interest, it doesn't take long to start up a conversation with another RVer, especially if there's something a little different about the rig he (or she) is driving. This was certainly the case when Sandy and I, out for a walk, stopped suddenly in front of an old motor home that was clearly a re-purposed Greyhound passenger bus, judging by the paint scheme, and sporting a sign on the nose that read, "Bates Motel."

Turning to Sandy, I said, "Now there's something you don't see every day in the RV park." We were clearly transfixed by this old bus: 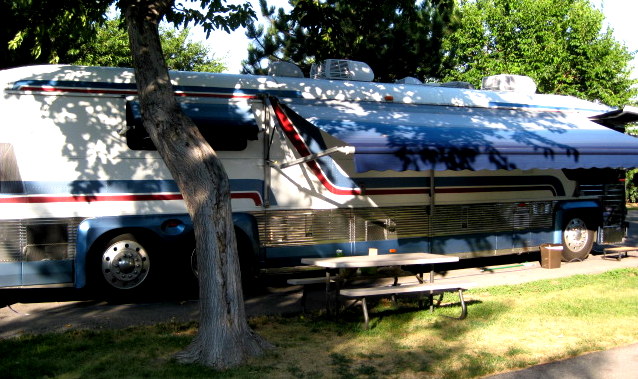 On the rear of the bus appeared a similar but different sign with a horror movie-stylized font. This is, of course, in reference to the 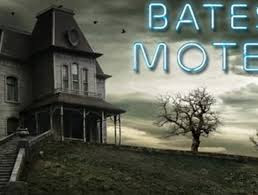 We finally noticed a gentleman sitting in a lawn chair near the entrance door of the bus. As I walked over to him, he stood up.

"Let me guess," I said. "Your name is Bates and you get a lot of inquiries about your coach."

"Right on both counts," he replied, smiling. He had a distinctive voice that sounded a bit like that of Walter Pidgeon, the distinguished character actor who starred in many classic old movies.

After introducing ourselves and learning that his name was Bert, I told him that I was fascinated with old bus conversions like this and began to pepper him with questions about the project. He was only too happy to oblige my nosiness and eagerly answered every question, irrespective of how dumb they may have sounded.

It was about this time that Bert's charming wife, Reen, stepped out of the bus, and we made our introductions again. These two were so friendly that we pulled up some chairs and talked as if we'd known each other for decades. Well, it was really two conversations--Bert and I talked about the bus, and Reen and Sandy talked about much more important things, I'm sure.


We learned they are from Florida and they have been touring the country in this bus since 1992, putting about 250,000 miles on it since the conversion that Bert, a retired engineer, did himself over a three year period. The bus is a 1972 MCI, operated by Greyhound for 20 years before Bert acquired it. My guess is that it accumulated at least a million miles--and maybe many more--before it was rescued by Bert.

The work performed on this conversion was simply mind-blowing to me and, seeing my obvious interest, Bert happily opened the cargo doors to show me the inner mechanical workings. As he strode confidently around, opening and shutting the big cargo doors, I was amazed at his physical vigor that belied his 81 years of age. (Before he revealed his age, I had guessed he was in his early sixties.)

He eagerly pointed out the water and waste systems he installed, along with a new inverter and 12-volt electrical system (the bus now has two electrical systems driven by two engine-driven generators--the original 24-volt and the new 12-volt one) in addition to a diesel genset for auxiliary electrical power. He also installed a propane system for cooking and heat and removed the ancient, 20-ton original air conditioner from the belly compartment, installing two roof airs and a new belly A/C unit that he fashioned from a residential window unit. And I haven't even mentioned Bert's complete remodeling of the interior. (The bus had around 50 passenger seats when he got it.) It now has all the amenities you would expect inside a modern diesel motorhome.

Inside the engine compartment was nestled the massive Detroit Diesel engine, a four-cycle version that Bert had installed to replace the original two-cycle model. He also upgraded the transmission to an Allison automatic from the original manual shift installation.

After dark, I walked back to the front of the bus and took the photo below of the illuminated sign on the nose. Although it isn't obvious from the photo, the "No" in "No Vacancy" flashes on and off. I thought this bit of serendipity was the perfect embellishment for the awesome result of all the efforts of this talented man. 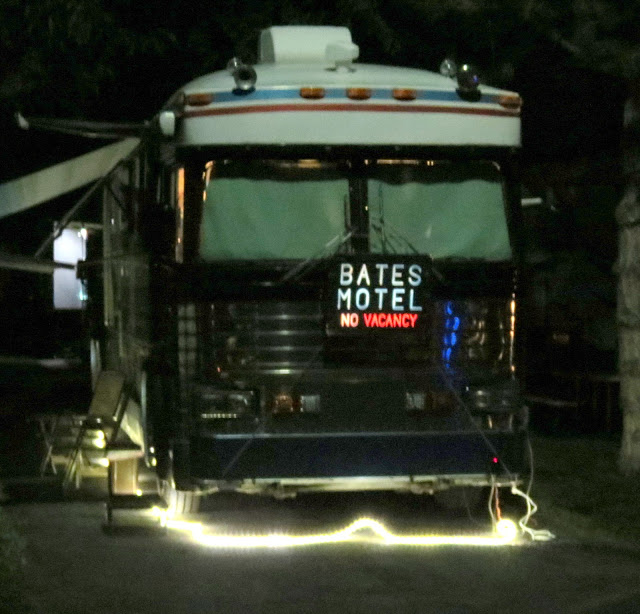 Godspeed, Bert and Reen, and thank you for sharing a bit of your traveling life with us. It was quite a show, and I hope we meet again.