Yes, I know, I know. I said I would never go back to Yellowstone during the summer when the kids are out of school. When we visited there two years ago, the crowds and the traffic were terrible. Our frustration caused us to leave without seeing most of the sights in the park. So what changed? Practicality; since we were this close, we might as well...(how many times have you said that? Plenty, I'm guessing.)

I'm kinda glad we did. Although the place was crowded, it seemed a little less so this time, so we decided to take two days and see most of the major sites we had previously missed.

We wanted to maximize those two days, so I stumbled upon this tour-guide app named Gypsy Guide, for $4.99. Since I respond to technie stuff like a moth to a flame, I downloaded it to my iPad and took it with us in the car: 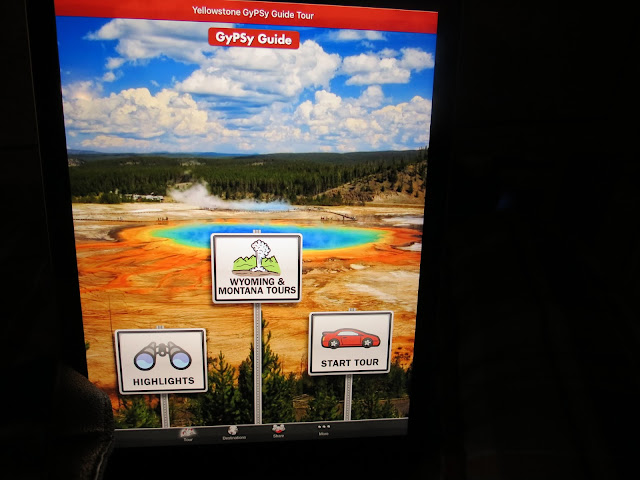 Perhaps some of you may have used this, but we hadn't heard of it before and, I must say, we found it amazing in its usefulness to maximize our trip through the park, advising us as we went, recommending things to see and those that were not so compelling, including turn-by-turn directions to get there. It knew exactly where we were at all times, and gave us all the guidance we needed when we needed it. The narrator proved to be a wealth of information, and we found this doggone thing almost human. I think we may even have tried to talk to it. It's not hard to use--just open the app, and it does the rest, with visual and audio cues. I don't think we'll ever be without one of these in the places for which it is offered.

We also watched Old Faithful again, just for auld lang sine. Sure enough, the geyser was still faithful, tossing out its hot water and steam about every 75 minutes: 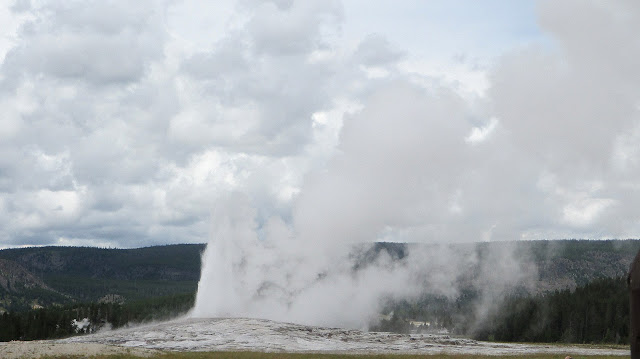 Here are some more sights from the park, which has half the world's active geysers--150 in all.


And so we say goodbye to beautiful and unique Yellowstone. We think we won't need to come back for a while. Perhaps the most fascinating thing about the area is how large and close to the surface the magma chamber is beneath the area and how large the volcanic eruption was that formed Yellowstone. The hundreds of boiling hot geysers, springs and fumaroles throughout the park give a stark reminder that the hellish eruption that formed the area some 650,000 years ago will someday happen again. And how often does this happen, you may ask?  Around every 650,000 years. The bad news is that time is up!

On our last evening in the area, I decided to pay a surprise visit to a longtime blogger/traveler friend from Oregon who I learned was coincidentally traveling in the area and camped only about three miles from us. He had no idea we were even in this part of the country. Sandy and I knocked on the door of his cabin and Gordon answered the door, displaying astonishment so total that he had to sit down on the bed. His dear wife, Juanita, was pretty surprised, too, but she held her composure a bit better. It was the perfect prank, but the only bad thing is that there will likely be payback. Here's a photo of Gordon and Juanita and their--not spoiled, I'm sure--beagles, Abby and Luna: 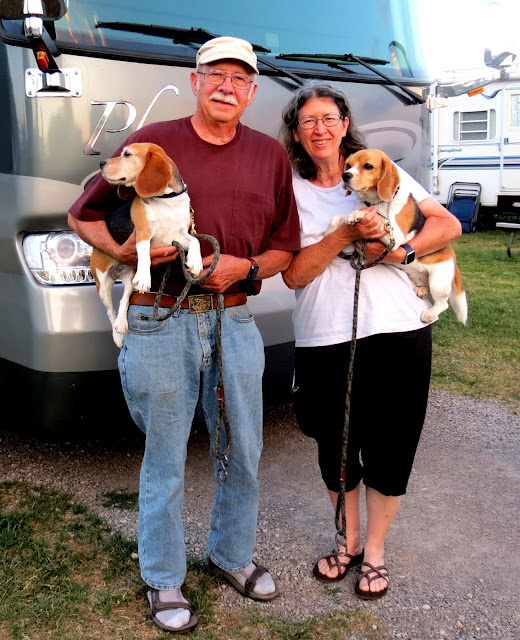 Gordon is an accomplished drone pilot/photographer and posts occasionally to his blog, Gordon's Geezer Grumblings. Thanks, guys, for being good sports; we enjoyed your visit very much.

I had rather own little and see the world than to own the world and see little of it. -- Alexander Sattler