This is Turning Out to be an Expensive Trip

It started in Memphis, when Phannie's big slide wouldn't retract. I had to call a mobile tech who replaced a shear bolt that I hadn't discovered. It cost me the better part of $100 to find out that tidbit of information.

In Detroit, Mae developed a problem with her throttle body for the second time. This cost $500 after having the same thing repaired in Tupelo for $700 a few months ago. A week or so after we left Detroit, Mae's throttle body (I still have no idea what that is) failed for the third time in Middleburg, Indiana. Three strikes--poor Mae was out; rest in peace, old girl, and long live the new Mae!

The new car was doing fine, except for my tire fiascoes in Elkhart and Butte that I described in earlier posts. (It wasn't the tires at all, but a leaking tire pressure sensor.) That cost about $500 for no reason other than my non-working brain.

It was in Kalispell that Phannie's bedroom air conditioner began to give trouble. The fan motor sometimes won't start and, when it does, it makes an expensive sound like a bearing that's about to swarm.

I think it was in Island Park, Idaho that the microwave stopped working. We didn't realize how much we missed that thing until it cratered on us.

So, here we are in Salt Lake City, where we have appointments to have a new microwave and a new air conditioner installed. But that's okay; we like it here, as we've finally found an RV park where we can get a spot for more than two or three days. To make things even better, we got an email from fellow blogger and local resident Ray of Ray and Cindy's RV Travels who invited us to have lunch with them which, of course, we eagerly accepted. We met at the Spaghetti Factory at Trolley Square in Salt Lake and enjoyed a fine lunch as we chatted about our respective adventures. They are a delightful couple--RV 'most-timers' who have a winter home in Arizona. Since we're going to be in that area next winter, we hope to meet up with them again! 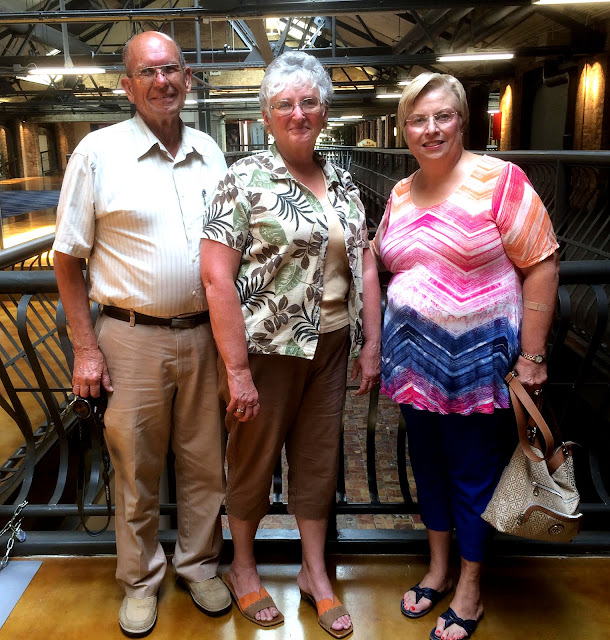 Thank you again, Ray and Cindy, for contacting us; we really enjoyed meeting you. And, of course, we will add them to our link, "RV Bloggers We Have Met."

And while I'm talking about links, you should know that I have added several more new RV parks to our popular list, "Best of the Best RV Parks." These are identifiable with a red triangle beside each new listing.

There are some places of interest here in the area that we didn't get to see on our last trip through Salt Lake City, so we'll undoubtedly seek them out while we're waiting on our service appointments.

If you're new to RVing and you're wondering if it is normal for things to break like this, the answer is probably yes and no. An RV--especially a motorhome--is a mechanically complex part-house and part-bus whose potential for something going wrong is exacerbated by the constant beating it takes on the road. On the other hand, we count ourselves lucky because we have had few problems with Phannie and Mae up until this point. Things are going to break from time to time, however, so we try to be prepared to take them on and get them resolved. We do this by 1) keeping Phannie and Mae serviced faithfully; 2) subscribing to a roadside service (CoachNet); 3) doing frequent walkarounds, checking tires and using a tire monitoring system; 4) driving carefully and sensibly; and 5) keeping a maintenance account well funded. (We don't like extended warranties after being ripped off a few years ago.)

I'm hoping this will be the end of this string of bad luck and that everything will get back to normal. More later from Salt Lake City...

I had rather see the world and own little than to own the world and see little of it.
--Alexander Sattler
Posted by Mike Mills at 11:58:00 PM