More Adventures in Salt Lake City and Some Thoughts on Blogging

Once we had the new A/C and microwave oven installed in Phannie, we began to take in some more sights around Salt Lake City that we had missed on our previous visit two years ago when we had to rush to meet a cruise departure schedule in Seattle.

One of the things we enjoyed was the very large (and, unfortunately, very crowded) Saturday market day in downtown Salt Lake City. There were way more than a hundred vendors selling everything imaginable, and we scored some really fresh homegrown peaches, corn, squash and tomatoes that were oh, so good. 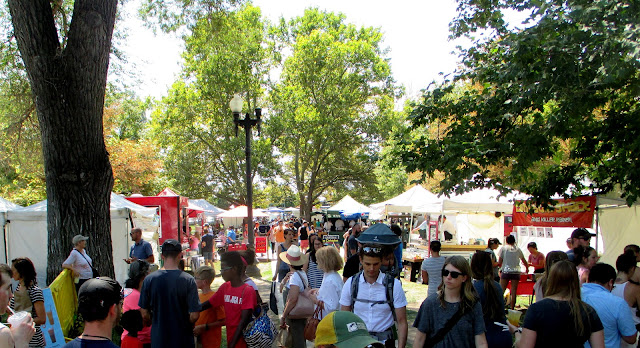 On another day, we drove out to the Great Salt Lake visitor center, where we looked out over the lake and watched a very informative video. We also strode out to the shoreline of the lake, where we saw firsthand the brine flies and brine shrimp--the only creatures that can live in the salty water. We also got a whiff of the perennial stench that emanates from the carcasses of the trillions of these creatures that have expired at the end of their brief cycle of existence. 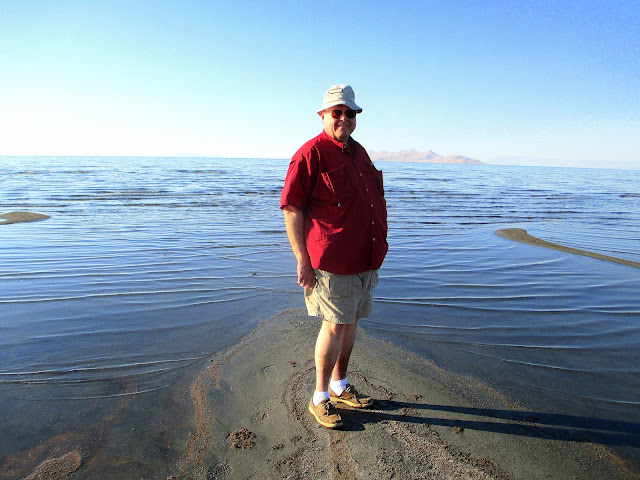 As you can see above, the lake is so large (135 miles long) that it disappears over the horizon. As we always do on these outings, we learned some new things, this time about the Great Salt Lake. I'll share a few of these things I didn't know about it:

Besides the Great Lakes, it is the largest lake in the country. However, it was, in an ancient era, 25 times larger, covering most of western Utah.

It is fed by the inflow from three rivers, but it has no outlet for the water except evaporation. As the water evaporates, the minerals from the inflow remain, accounting for the extreme saline condition of the water, which contains about eight times the salt content of sea water. Because of that salt, the water is so buoyant that it is almost impossible for a swimmer to drown. No, we didn't take a swim. I didn't think I needed to do that, as I've sorta mastered floating, which is about the extent of my swimming. Thank goodness for having discovered the dogpaddle, or I would probably drift out of sight.

The lake's average depth is 16 feet. Because of its shallowness, the size of the lake varies from 1000 to 3000 square miles, depending on the amount of annual rainfall that occurs in its watershed.

It is an essential stop for millions of migratory birds, many of which stop to feed on the huge brine shrimp population. Besides being plentiful enough for all of these winged visitors, the brine shrimp commercial harvest is also enormous, bringing $50 million to the Salt Lake area economy each year. What is the market for brine shrimp, you ask? Well, it seems they are eagerly sought by makers of fish food and other animal food, especially in Asia. And what do the brine shrimp eat? Algae that grows on the bottom of the lake just as the shrimp are hatching and need food when the weather warms in the late spring. Amazing design or merely coincidence? I vote for amazing design.

Okay, that's enough for what is supposed to be an easily readable blog post that is not too wordy; there is plenty more information online.

By the way, since I just mentioned my concern for the readability of this piece, perhaps it is time once again to offer some thoughts on a well-crafted blog post, in case you write a blog or are considering writing one that will attract and keep readers:

1. Brevity is better. I try to keep my posts at around 500 words to avoid reader fatigue; attention spans get shorter with each generation, I've found. I blame the technology that I absolutely wouldn't want to live without.

2. Include photos, but try not to go crazy with them. Include a few really good shots that illustrate what you're talking about, and don't include 14 different photos of a single buffalo. Your readers won't appreciate it, and neither will the buffalo.

3. Having settled on your photos, consider using enough narrative to describe your reaction to them or to the theme of your post. If possible, try to tell a story of sorts as you write. Readers love stories, and they want to know what you observe, think or feel about your subject. Try to show some of your personality when you write by relating personal experiences. The more humor you can use, the better.

4. Don't worry too much about the mechanics of writing. The important thing is to have a record of your traveling experiences for that inevitable time when you hang up the keys. Even then, you can happily retrace each mile, guided only by your memory and the roadmap of your journal.

Regrets? We may have a few when we reach the twilight of our years, but having no record of our adventures will not be one of them.

(Uh oh, I think I broke rule number one above, running over 500 words. Shame on me.)

I had rather see the world and own little than to own the whole world and see little of it.
--Alexander Sattler