Okay, let's go ahead and get this out of the way:  We are spoiled, whiny, tenderfoot, prima donna deplorables. No one reading this post could arrive at any other conclusion, based on what will be my sniveling account of how hot it is here in St. George. Furthermore, this post may get the prize for being off-the-rails silly. I think it's because of the heat, but sometimes I just feel like writing something for fun.

Here's the strange part: I knew it was going to be hot before we headed down I-15 to get here. I assure you that my faculties have not yet deteriorated to a point where looking at a high in St. George of 105 degrees on Weather Bug doesn't enable me to associate that with a certain level of potential human discomfort. Yet there we went, undeterred, as though I were thumbing my nose at silly little things like, well, facts.

In this case, my discomfort level when we arrived at St. George and I descended the steps from Phannie's air conditioned cockpit led me to believe that, somehow, I had flatlined at the very moment I opened the door and, having perished, stepped squarely into the afterlife which, to my surprise, turned out to be hell! I must tell you that this was not the outcome I had in mind as my exit strategy.

I looked again at the sign that read 'Temple View RV Park' in an effort to convince myself that I had not, indeed, been cast into the lake of fire. I instinctively raised my forearm to cover my mouth and nose in an effort, I suppose, to keep from inhaling the hot wind that would surely char my lungs.

Across the driveway, I could see the park office's entrance door, and I staggered toward it, hoping it wasn't a mirage. After I took a few halting steps, I looked at the soles of my shoes to see if any melted asphalt had clung to them, impeding my only chance to save myself. Then it occurred to me that I had left in Phannie's cockpit cupholder my Yeti mug that was filled with ice water. I was beginning to panic; I think I saw buzzards circling overhead.

I was thinking that if I could just make it inside the door, perhaps one of the staff members would call 911 before I dissolved into a puddle of lard before their eyes. Sandy, of course, was oblivious to all of this, as she had probably resumed her nap back there in Phannie's copilot seat, footrest extended, and with four A/C vents blowing enough cold air directly on her to make her usually cover up with a light blanket as we roll down the highway.

Before I had brought Phannie to a stop in the driveway, I had fired up the genset to give life to the roof airs, which I turned on before heading outside. With the dash a/c and the roof airs on, it was downright frosty in Phannie. Except I wasn't there; I was busy succumbing with a heat stroke there in the driveway.

I had just enough strength left to pull open the office door, where a blast of cool air washed over me. After a few minutes, the room stopped spinning and I could barely see the counter clerk, gesturing toward me and saying, "Are you Mr. Mills?"

I wondered, "How did she know?" My first delerious thought was that she had read my name on a secret 'Do Not Resuscitate' list circulated by some left-leaning group toward anyone whose vehicles show Texas license plates. After a few minutes of deep breathing, I was able to make sense of things and finally get registered.

Okay, maybe I've embellished things a little, but my point is that it is pretty danged hot here in St. George and, after months of our frolicking in cool and mild temperatures north of the equator--which I believe runs exactly through St. George--we were not accustomed to this hellish climate where the sun is certainly no more than about 65 miles from earth.

So why would we come here in the summer, you may ask? Other than the obvious answer--stupidity--my thinking was that, since we are headed toward Flagstaff anyway, why not stop here and see a couple of national parks we had not visited before? It made sense to me, and I thought we could just 'man up' and git 'er done. And really, that's what we're doing, but not without plenty of shared speculation as to whether my dementia is becoming really obvious.

We really didn't know what to expect as we drove toward Zion N.P. We had looked at it online, but there is nothing quite like seeing it in person. The photos and videos don't quite do it justice. It consists of a relatively short canyon whose many-hued rock walls soar almost vertically above the fast-flowing stream that runs through it. It is a beautiful and colorful display of nature's wonder, and I would like to have spent a good bit of time there, walking on some of the many trails and taking photos.

But that wasn't going to happen. It wasn't any cooler in the canyon than it was in St. George, and neither of us enjoys the outdoors in these conditions. As luck would have it, the shuttle bus that drove us through the park was a brand new air-conditioned one--the only one in the fleet--and we didn't dare get out of it for more than a minute or two at its stops. Nevertheless, I was able to get a few decent photos, but this place is worth another trip when brimstone isn't falling from the sky like it was on this day.  Here are a few photos I was able to shoot: 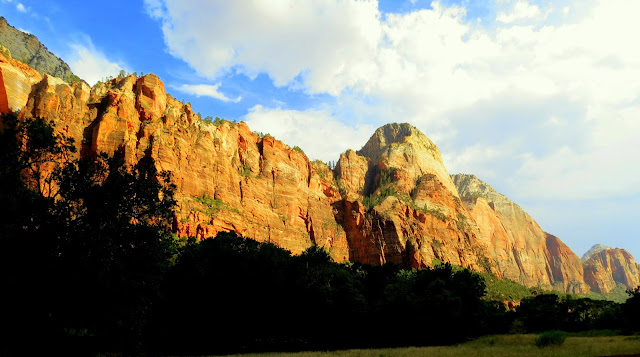 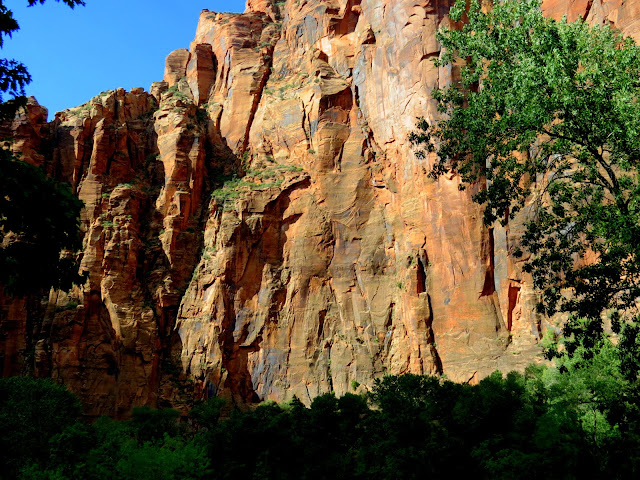 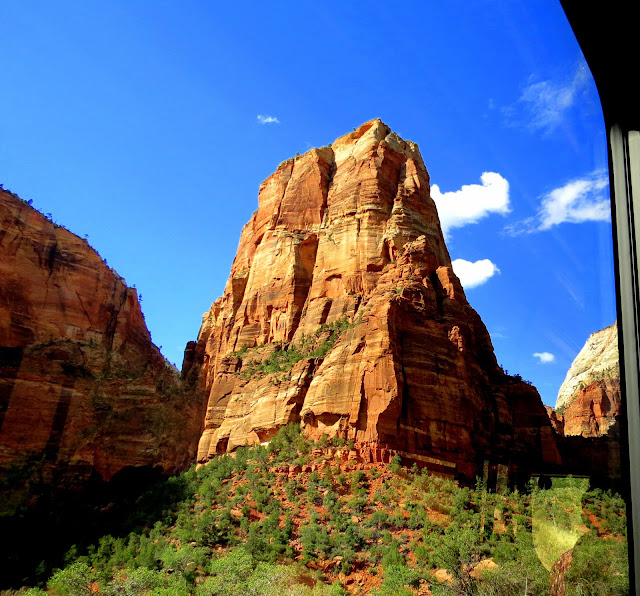 I kept thinking how lucky we were to have had Phannie's bedroom air conditioner replaced in Salt Lake City. If it had gone out here, I guess we would have had to be airlifted out or something--who knows?

I hope you've had fun reading this silliness; it was fun writing it.

I had rather own little and see the world than to own the world and see little of it.
--Alexander Sattler