Promontory, Utah is truly in the middle of nowhere. It consists mainly of a relatively nice visitor center operated by the National Park Service, situated on a treeless rolling plain near the summit of the Promontory Mountains north of the Great Salt Lake. Near the visitor center are several outbuildings, the largest of which is a locomotive maintenance facility. And those were all the structures visible anywhere as far as we could see, except for a section of railroad track of perhaps a mile in length which is all that remains of the historic rail line that finally united the U. S. after the end of the Civil War. This section of track was abandoned in 1904 when a shortcut rail line, the Lucin Cutoff, was built on a 32-mile trestle across the Great Salt Lake.

I was quite surprised that the Promontory site receives fewer than 50,000 visitors each year--a tiny number, given the enormous importance to the our country of the joining of these rails. Obviously, the remoteness of the location is a significant factor in the paucity of visitors, but it seems a shame the level of interest is so low. I wonder if this is one of the positive events in American history that are ignored by educators who are forced to concentrate on things like social ills and the sins of our forefathers. (Sorry for the mini-rant, but this is something that bothers me greatly.)

Being a bit of a history buff, seeing the place where the transcontinental railroad was completed on May 10, 1869 has been a bucket list item for quite a while. We decided to make the 1 1/2 hour drive from Salt Lake City and check it out on a very warm and sunny afternoon. After a nice drive north on I-15 through Brigham City, we exited at Corinne and continued westward on an excellent two-lane highway that passed just north of the upper Salt Lake Basin, where Mae began her climb to the summit of the relatively modest Promontory Pass. Looking to our left, it was easy to see the dry northern end of the lakebed of the Great Salt Lake: 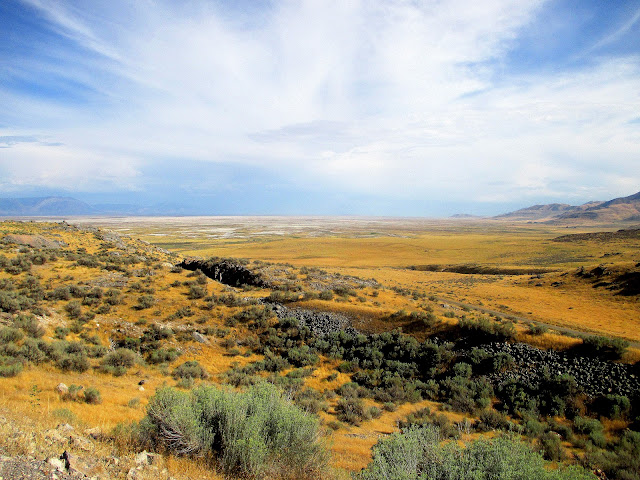 It wasn't long until we saw this sign as we neared the visitor center: 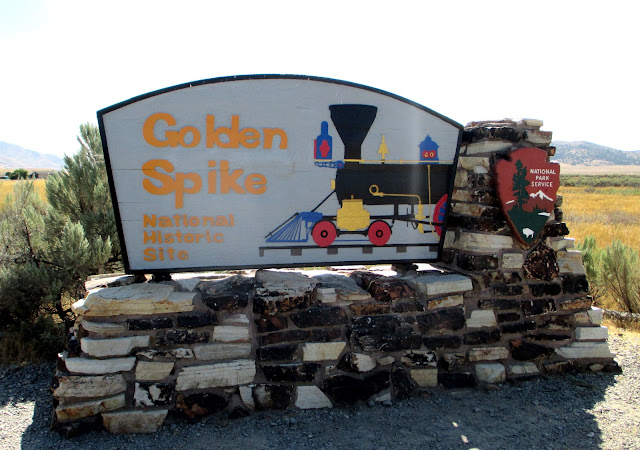 As we entered the park environs, there were turnouts where we could look at historical markers and view portions of the old track bed that paralleled the road in some places: 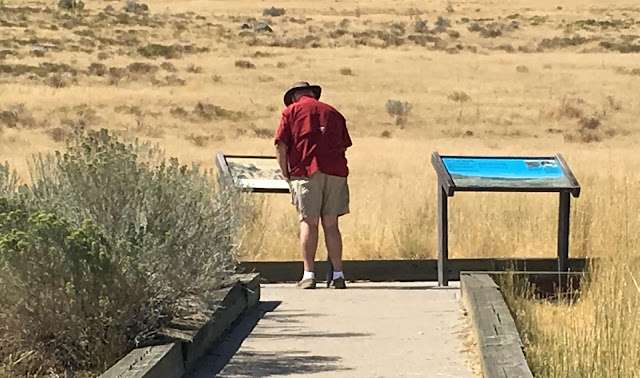 Continuing toward the visitor center, I imagined what it must have been like 150 years ago when the Union Pacific's bustling and noisy army of workers were feverishly laying track here east of Promontory, knowing they were so close to the end of the line where they would meet the Central Pacific crews. At the visitor center, we watched a short but very informative video about the history of this place and the driving of the golden spike in the final railroad tie. There were some exhibits of relics from the project as well as a replica of the golden spike itself (the real one is in a museum now): 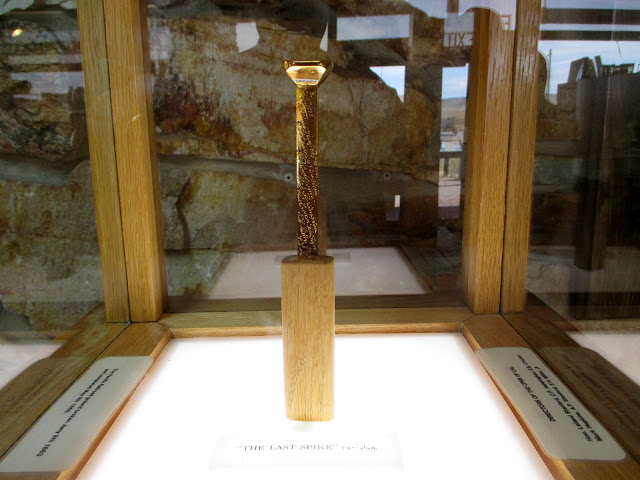 The engravings on the spike are the names of some of the dignitaries at the joining event.

Leaving the theater, I snapped a photo of this painting I liked that commemorated the rail joining: 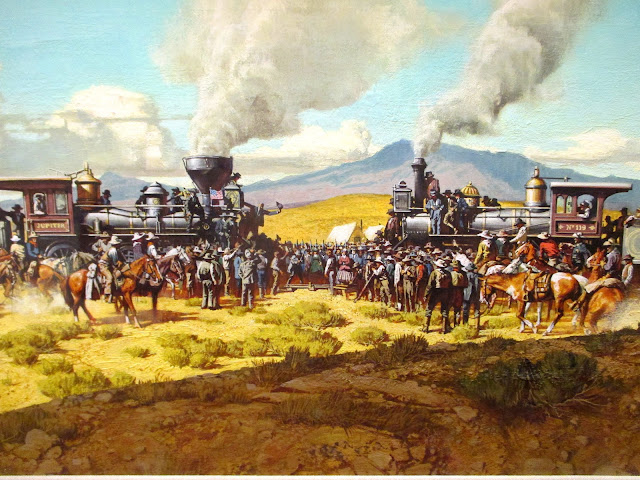 The next photo is a copy of an actual photograph taken of the event: 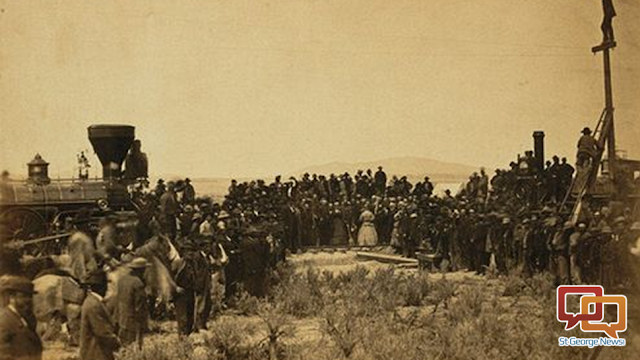 Next is a photo that I took during this visit of the same site. Notice that the telegraph pole seen at the right of the photo above is still replicated at Promontory today in the photo below: 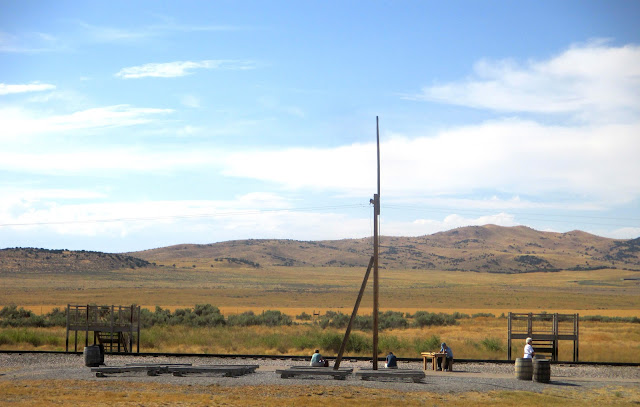 I was disappointed that the replica locomotives were not in place here at the meeting point as they usually are on a daily basis, to the delight of visitors, I'm sure. The track is undergoing some maintenance, so the locomotives were tucked away in the maintenance facility. We were allowed to see them, however, and they let us climb up into the cab as well: 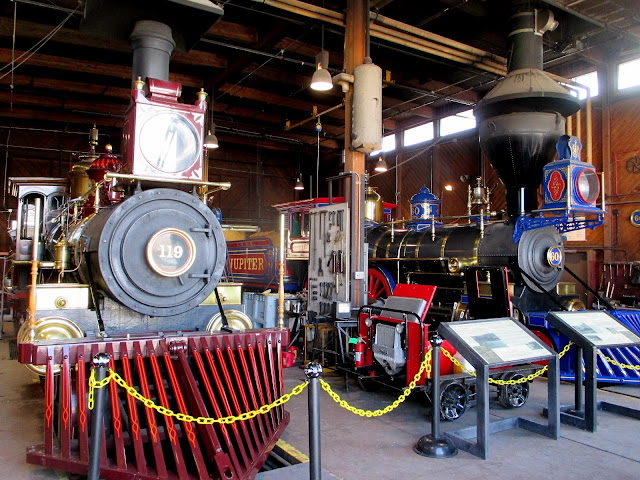 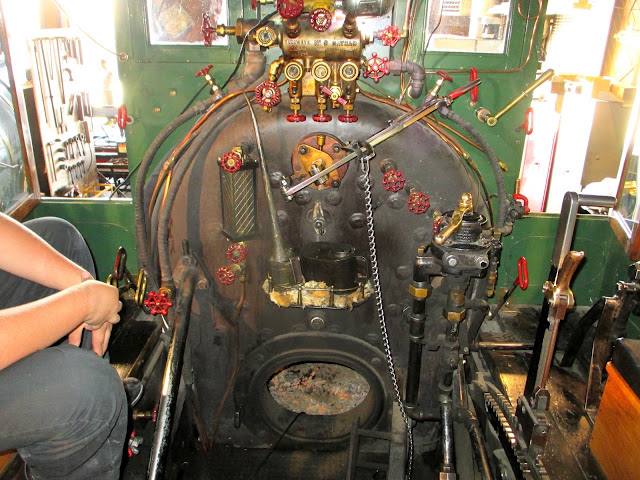 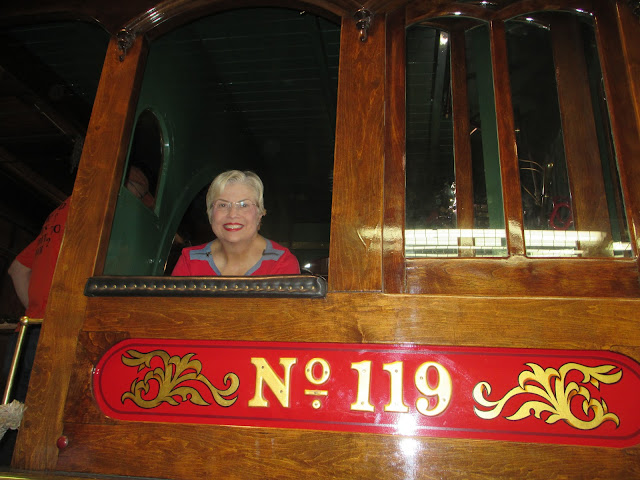 An interesting bit of information that I didn't know was that the Central Pacific and Union Pacific crews didn't suddenly meet at Promontory on May 10, 1869. They had previously met some time before that and actually laid their tracks parallel to each other for 250 miles before the two companies could agree on an official meeting point. Promontory wasn't chosen until President Ulysses S. Grant withheld payments to the companies until the decision was made. Here's another tidbit: Because a telegraph line was built along with the railroad, the announcement of the joining was known immediately on both coasts, as the telegraph operator was keying the message in real time.

We spent a good deal of time at the point where the final tie was laid, commemorated by this varnished railroad tie: 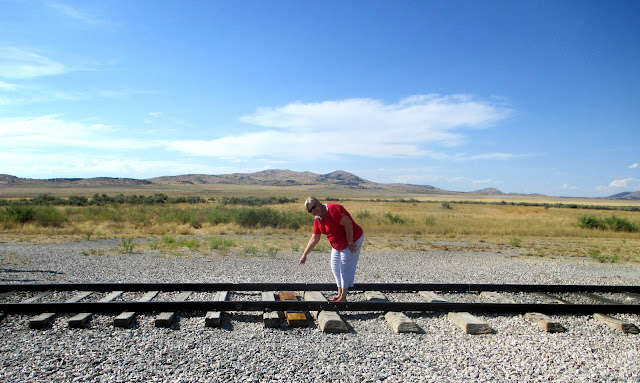 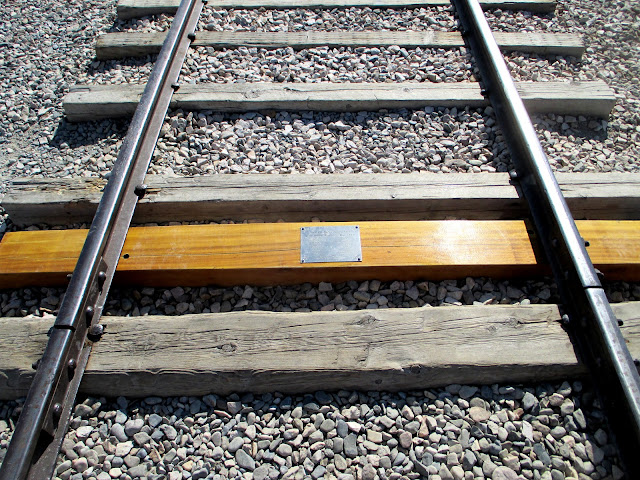 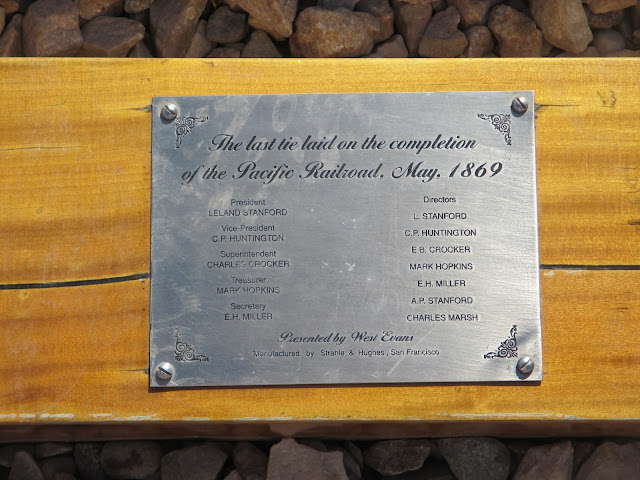 Looking west from the Promontory site, I took this photo and stared for quite a long time toward the horizon, trying to take in the magnitude of this achievement so many years ago when the work of modern machinery was done by human laborers under harsh conditions, hacking their way through forests and blasting through vast granite mountains, where progress was sometimes only eight inches per day. 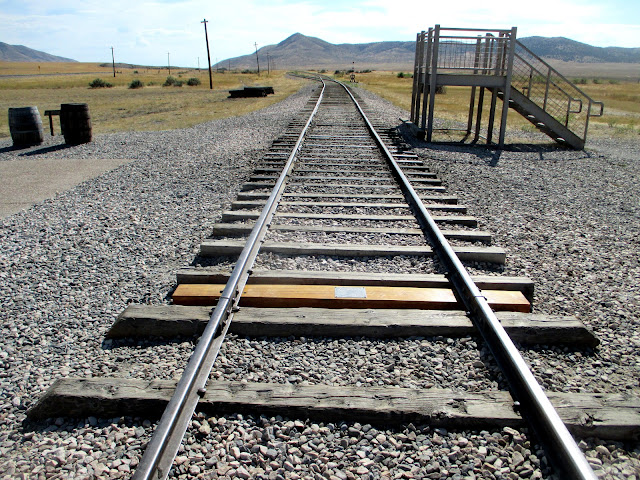 There is so much more to learn about this amazing event in our nation's history that I can't possibly mention here. Its importance in unifying the country--especially just after the Civil War--and its vital role in advancing the development of the West is probably not fully appreciated by the majority of our citizens.

We lingered here for quite a while after the visitor center closed, pondering the sensations all around us in silence. A light breeze stirred the grass in the dry, nondescript and lonely landscape. Besides the two of us standing together, there were only the rails, rusting, unused and seemingly forgotten in the middle of nowhere, saying nothing about how very important they were.

I had rather own little and see the world than to own the world and see little of it.
--Alexander Sattler