We must tell you that we have enjoyed our stay in Salt Lake City, checking out some places we didn't go on a previous visit two years ago. We've faithfully posted about these and, having nothing else on our agenda after Phannie's repairs, hitch itch has set in. So, we'll be moving along to St. George, Utah, with an intervening stop in Provo to see some new friends we came to know through RVillage when we were back at Yellowstone.

Speaking of RVillage.com, the social media site that is a bit like a Facebook for RVers, I have been a member almost since its inception. One of the purposes of the site is to allow RVers to become more engaged in social networking within their group, but that seemed to have taken off a bit slowly in the first couple of years. However, now that the site is up to about 75,000 subscribers, I'm getting an increasing level of social contacts by fellow members. Besides Dave and Janice, our friends we're meeting in Provo, we met a delightful couple from England named Murray and Barb while we were at the KOA in Salt Lake. Our visit with them was brief, unfortunately, as we were scheduled to leave the park the day after they arrived. The RVillage website alerts the user when new RVillage members arrive in the user's RV park. Introductory greetings by Dave and Janice and Murray and Barb are the first we've actually received since we've been members. I guess the generally older RV population has been slow to warm up to the technology.

We're leaving with our wallet a few thousand dollars lighter, but we have a new air conditioner and a new microwave oven to show for it. The new A/C makes us especially happy since we're going toward some much warmer weather in southern Utah as we pay visits to Zion and Bryce Canyon National Parks. We don't need any A/C hiccups while we're there in the heat.

A few nights ago, we attended a play in a community theater in downtown Salt Lake City. Sandy loves live theater, and this was part of her birthday gift. The show was a musical comedy named "Utahoma," performed at the Off Broadway Theater. It was a spoof of the classic "Oklahoma" musical and was conceived, written and produced here in Salt Lake using local actors. The whole thing was woefully low-budget and not terribly well attended on this, a Monday night, but I must tell you that it was absolutely hilarious. I think that if we had been staying longer, we would have seen it again, just so we could catch more of the rapid-fire jokes, puns, songs and antics of the energetic little troupe of actors: 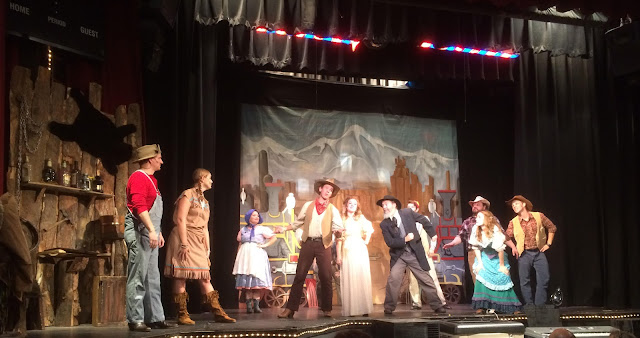 What we've posted over our three weeks or so here in Salt Lake City is fairly typical of our life as fulltimers. Reading back in the blog, we see we've been quite leisurely in our sightseeing, not wishing to over-schedule ourselves. A proper schedule, in our retired way of thinking, involves planning only one activity on a given day and making sure there is least one intervening day of rest before scheduling something else. And we must remember to try to make time for a daily nap to keep up this strenuous pace.

I can see your wheels turning; you're probably thinking: 'You mean to tell me that it took you three weeks to see the few things you posted about?' Well, yes. But you have to remember that we also had to perform everyday living chores in the meantime. We had to shop for groceries, make trips to Wal-Mart, get the car washed, cook meals, do the laundry, clean house (even though it only takes 15 minutes to make Phannie spotless inside), go to the beauty shop (not me--Sandy), try new restaurants, etc. Scheduling our activities and down days while tossing in some nap times is almost work in itself!

According to the generally accepted wisdom regarding the experiences of new fulltimers, we seem to be settling, as expected, into this more thoughtful and measured existence--staying longer at the places we go and avoiding the frenetic traveling excesses that come from the first taste of freedom. And that's a good thing; we find ourselves enjoying retirement even more now in this leisurely mode.

We stopped at Speedco just outside Salt Lake City to have an oil change and lube job for Phannie. 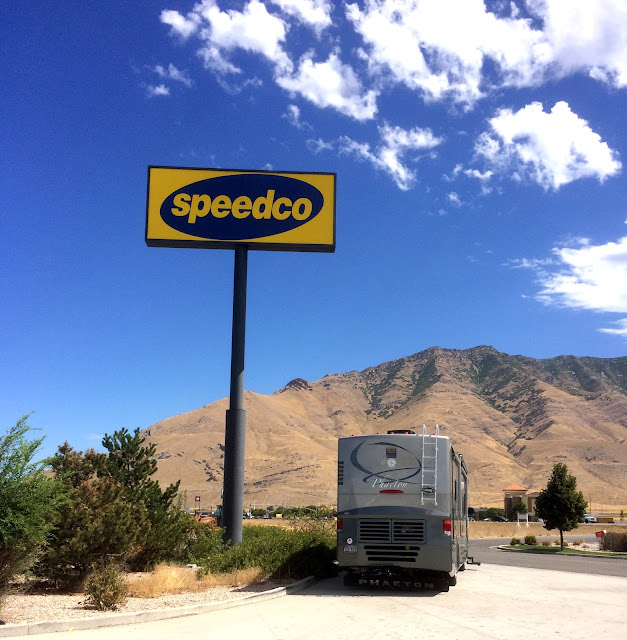 We've covered a good bit of territory in the old girl this summer, so we had to have an interim service done before the annual one that will be due next spring. We're not sure where we will be then, but we like to take it to Bay Diesel in Red Bay, Alabama.

After we leave Provo, we'll stop in St. George for a week, finally to see Bryce Canyon and Zion National Parks for the first time. Then, we'll be headed to Williams, Arizona for our first visit back to the Grand Canyon in 20 years.  Stick around!

I had rather see the world and own little than to own the whole world and see little of it.
--Alexander Sattler
Posted by Mike Mills at 2:28:00 PM