A Concert at Balboa Park

Uh oh; I'm getting way behind on my posts. We've already left California, and I've only managed one post about our stay there! A week is not long enough; there just wasn't enough spare time to write posts.

Some folks may not realize that, for me, a good deal of time goes into writing a post that, hopefully, will be well received--by that, I mean, entertaining, informative, visually appealing and with a little humor thrown in. It's not easy to nail all of these at the same time, but I do try.

There's something else of fairly recent origin that consumes extra time for me, and that is the necessity of ensuring the correctness of the mechanics of my writing to the greatest extent possible. This is something I've always tried to do, but a gifted scribe and fellow blogger, Mary, who writes the superb "Reflections Around the Campfire," has poured some glue in my gears.

Both of us are near-neurotic perfectionists about writing, so we have developed a friendly rivalry of sorts, pointing out each other's slip-ups in the comments sections of our posts. For me, proofreading and rewriting has now taken on a life of its own, for fear of a missing a comma, dangling participle or some other unthinkable atrocity.

Inevitably, however, she will spot something amiss and have the poor taste to point it out, nestled in just enough praise to avoid becoming the subject of a voodoo doll. She is always there, ready to pounce, but then, so am I! It's always in fun, but you would have to be a bit obsessive-compulsive, I guess, to appreciate it.

Hmm. I see this train is well off the tracks, so let's get back to San Diego, shall we?

The next adventure was to Balboa Park, a 1200-acre cultural oasis  where museums and other exhibits, including the world-famous San Diego Zoo, are located.  But we didn't go to the zoo (gasp). I had been there many years ago and, while I found that visit enjoyable, it was enough; I'm fairly certain I could still identify its occupants, despite my fading memory. Sandy certainly was not clamoring to go either, as she has a highly developed distrust of animals that would fail to question the morality of having her for lunch. She also has a toxic fear of snakes so, for her, that pretty much put the kabosh on the zoo visit, no matter how epic it might have been.

What I really wanted to see (and hear) was the Spreckels organ. This is the world's largest outdoor pipe organ, constructed within its own ornate pavilion in 1915, through the generosity of John and Adolph Spreckels, sons of Claus Spreckels, a sugar magnate of the time and perhaps the wealthiest family in San Diego. It was built as a part of the Panama-California Exposition, celebrating the opening of the Panama Canal and touting San Diego as the first port-of-call for ships transiting the canal. The money donated by the Spreckels brothers for the project would amount to about $3,000,000 in today's dollars. I failed to get a wide shot of the beautiful pavilion, so I purloined this one from the Net: 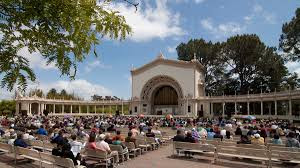 There is a free organ concert open to the public every Sunday afternoon so, this being Sunday, it was a must-see. Here's a bit closer view: 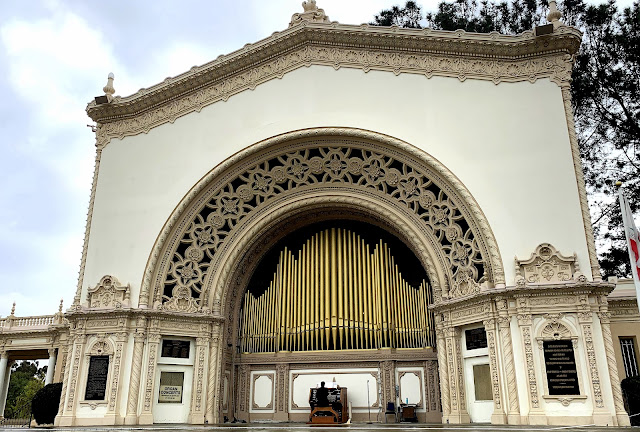 The organ contains over 5,000 pipes in 80 ranks and, when not in use or during rainy weather, a garage-door-like cover is lowered in front of the organ. The console is turned sideways to allow the door to open and close and looks like this: 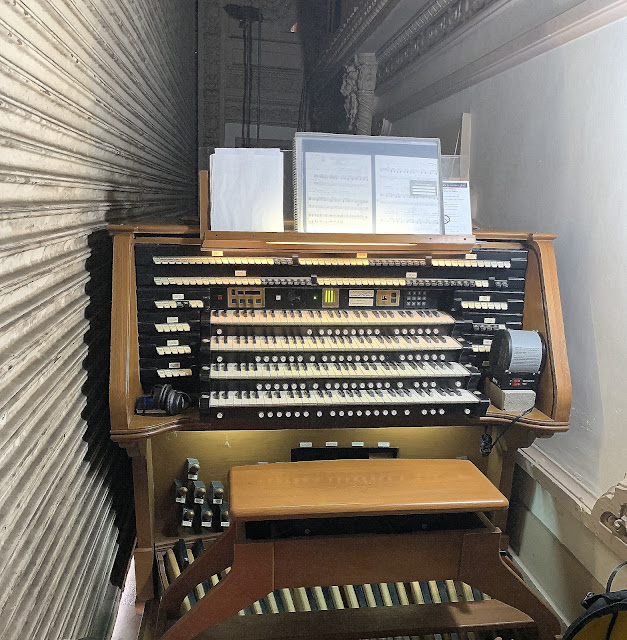 By the way, this is certainly not the original 1915 console but a modern electronic one, whose many stops and setups are computer-controlled. The current San Diego civic organist is Raul Prieto Ramirez, who performed about a half-dozen classic selections, including Claude Debussy's familiar Clair de Lune. The concert was very enjoyable, especially since I was a church organist for a number of years--definitely of a junkyard class compared to Mr. Ramirez, who played masterfully.

After the concert, we ate dinner at a totally forgettable Thai restaurant. Sometimes the reviews just aren't that reliable.

The next day, which turned out to include the only rainy weather of our stay, was a down day for us. Sandy had laundry to do and I had to tend to some projects of my own. Even in a friendly coach like Phannie, there are always little things to investigate, tweak or repair. This time, it was replacing some batteries in the motorized window shade controllers and tweaking the new TST tire monitoring system. For once, we ate both meals in Phannie--a full breakfast with eggs and bacon and burgers for an early dinner. As we've gotten older, we've found that two meals a day are plenty.

The next adventure will include a trip to Los Angeles by car. And, miraculously, we lived through it! Oh, I guess that's pretty obvious, isn't it? Stick around, and I'll tell you about it.