We Cheat Death With a Road Trip to L.A.

All you need to know about the traffic in Los Angeles is to look almost anytime at your favorite mapping app that shows the traffic delays in an around the city. The traffic arteries often show up to be yellow or red in many places. Yet, I wanted desperately to go, in order to relive a childhood memory that has remained vivid for 60-odd years. That memory involved a visit to the Griffith Observatory when I was a boy of about nine or ten.

I remember almost nothing else from that trip as a youngster, but my parents' thoughtfulness in taking me to that observatory kindled for me a lifelong fascination with astronomy that began with my visit to the planetarium. It was not until then did I fully realize the vastness of the universe and the uniqueness of planet Earth. It didn't hurt that I had already taken my first ride in an airplane by that time and was hooked on flying as a career. The fascinating program in the planetarium just added kindling to my already white-hot desire to be "up there."

Adding to my willingness to brave the freeways was that Sandy had never been to a planetarium, and she professed a great interest in doing so. I know her well enough to understand that a significant part of her interest was not so much in the observatory experience,  but to observe something else.

From the stories we've shared from a lifetime together, she knows much of what my childhood was like, as I know much about hers. Knowing me as she does, she has always wanted to see the places that were perhaps the geneses of what makes me tick. It was the same with our ill-fated Hummer ride to the San Andreas fault a couple of posts back. She knew of my interest and wanted to be part of it, irrespective of what she might rather have been doing. The same was true of her wanting to see where I had taken my first ride in an airplane in a small nowhere town in far east Texas. It's a thing called love--that most important and selfless of human attributes that I have learned mostly from her and her seemingly boundless measure thereof. She is, indeed, a treasure.

Now that you know the psychology behind our trip, we dashed away in Mae, unsure of what calamity we would face in the concrete jungle that is I-5 through Los Angeles.  It wasn't too bad on the trip northbound. We were using the Waze app for navigation, whose intuition is almost eerie in guiding us onto alternate routes, allowing us to avoid a traffic jam ahead that we do not yet see.  I guess you have to have been around as long as I to appreciate and marvel at such technology at my fingertips. While there were no close calls, the drivers seem oblivious to speed limits. Knowing that not keeping up with traffic could be disastrous, Mae was getting a run for her money. I kept a close eye on the rear view mirror, lest some big rig from behind would squash us like a bug. I felt a little like Dennis Weaver in the 1971 movie, "Duel." (Google it.)

We made it without incident to the Griffith Observatory, perched on Palomar Mountain overlooking all of Los Angeles, Hollywood and Beverly Hills. It was more beautiful than I remembered: 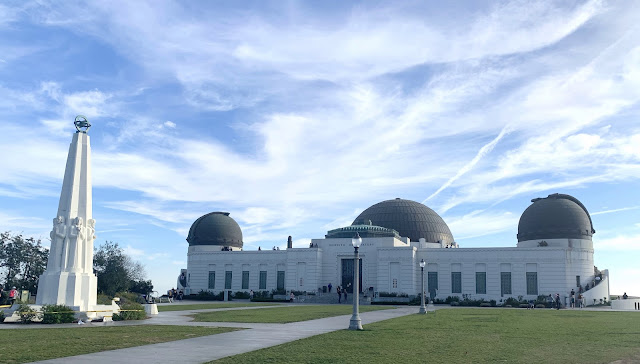 Here are a couple of photos from the observatory's parapet, overlooking downtown Los Angeles and the iconic Hollywood sign: 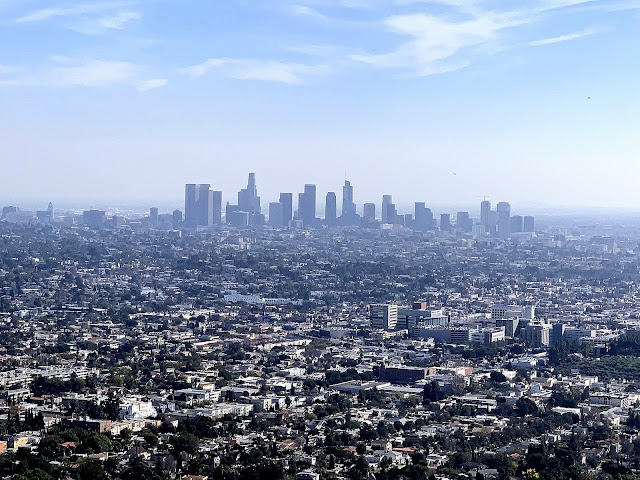 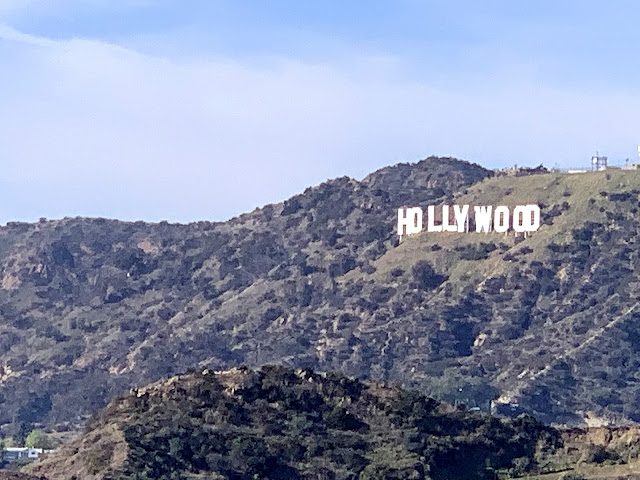 We enjoyed the view and the exhibits inside the building until time for the planetarium show that lasted about a half hour and was very well--in fact, enchantingly done, with the aid of a masterful narrator. Sandy was mesmerized, as was I, as my childhood memories came flooding back. It was evident that the projection technology had vastly improved in the last six decades, and it felt at times as though we really were speeding through the Milky Way and beyond. Here is a photo of the overhead screen and projector console as the narrator was insisting that our cell phones and photography were, from this point, verboten. To set the right mood, the overhead screen gave the very real sense of fading from twilight to darkness so the star show could begin: 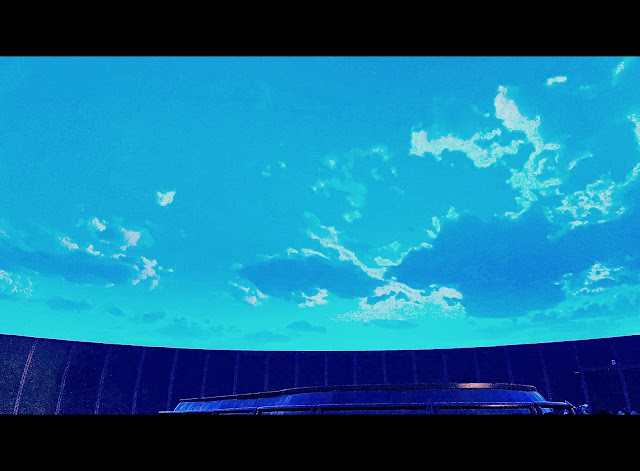 I can't begin to tell you what this revisited memory meant to me--and to Sandy, seeing my reaction. For a little while, I was that impressionable young kid again, my imagination flooded with the discoveries I was seeing. It was though I had never known  tragedies like the loss of a child, my parents and most of my close relatives. But Sandy was there, and that was all that really mattered.
It also made me wish that all parents would do their best to give all the learning experiences possible to their children, for they never know what will stick for a lifetime in young minds.

The drive back to San Diego was a nightmare, as it was close to the afternoon rush hour. Waze made no attempt to get us close to I-5, routing us instead through hilly neighborhoods and narrow streets--always southward, though, and occasionally allowing us a glance at the gridlocked freeway it was skillfully avoiding. The side streets were slow and sprinkled with traffic signals, but not as slow as the poor slobs inching along on I-5. Eventually, Waze turned us onto a freeway that would lead to another freeway and yet another, none of which I remember, until we eventually burst out onto I-5 which, at this point, was still bumper-to-bumper but, at least, moving. The packed ten lanes never gave any significant breaks for a hundred miles, eventually allowing us to reach the speed limit well after nightfall and nearing our destination. At least we weren't fearful of being run over from behind, as on the northbound trip. The cars were rarely moving fast enough to do any damage.

What a day and what a trip--and what a memory revisited! It is for days like this that we became vagabonds for a while. I can now file it away--freshly remembered and, importantly, accompanied by my better half, who was herself touched by what touched me. Into the blog goes another important thing we will not have to regret not doing.