Friends, Family and So Much to See in the Phoenix Area

We had planned another stopover in Mesa on the way back from California to visit family and friends, and we were delighted to be able to spend time with both and see some really enjoyable sights.

We first met up with John and Bobbie Jo, RVers whom we met years ago in the Rio Grande Valley. Since then, they had made a few trips to the Mesa area and became so enamored with the winter weather that they bought a new winter home in the Viewpoint, a large RV and manufactured home village that is a sister park to ours here at Monte Vista. Viewpoint has two golf courses, so John is able to play to his heart's content. Here are a couple of photos of their beautiful new digs: 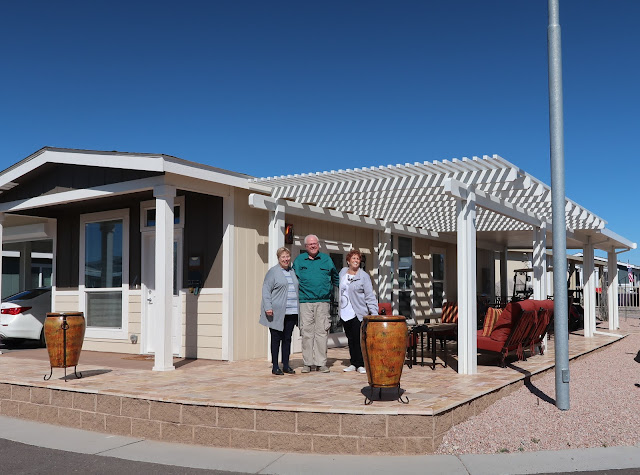 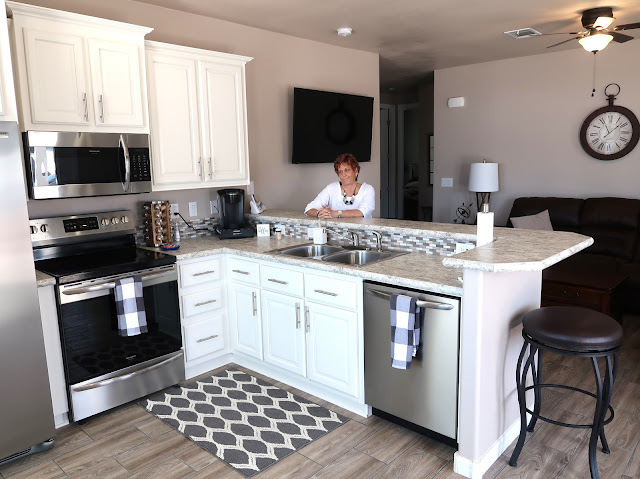 We took a scenic drive from Mesa out to Tortilla Flat on route 88, through the hills east of town that wind around Superstition Mountain and Canyon lake. The rock hills and curving road made for a new "must view" pullover every few minutes. Here is a great view of Canyon Lake. It seems incongruous that the saguaro cacti, icons of the dry desert that they are, can be seen everywhere around the lake. 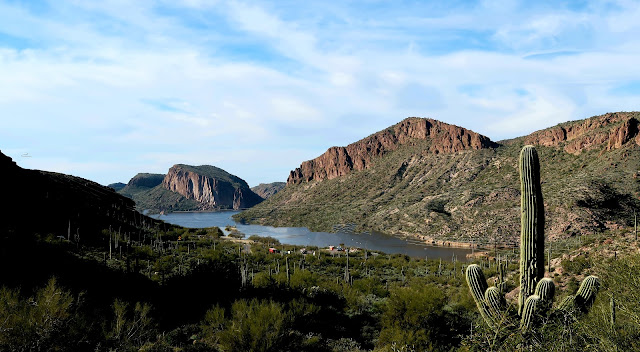 A major irritation--something I suppose couldn't be helped--was that there are electrical power lines and their supports that appear in many places along Arizona 88 that ruin the most desirable views for picture-taking. These lines originally appeared in the photo above, but I made them disappear in the editing. Is that cheating? I don't know, but why not? This is the way it would have looked before they put up those infernal power lines! By the way, the many little pole-like things in the distance are not power poles but many more saguaro cacti like the one in the foreground.

Just beyond Canyon Lake, the little collection of buildings named Tortilla Flat is a mecca for tourists and, undoubtedly, a gold mine for the owners: 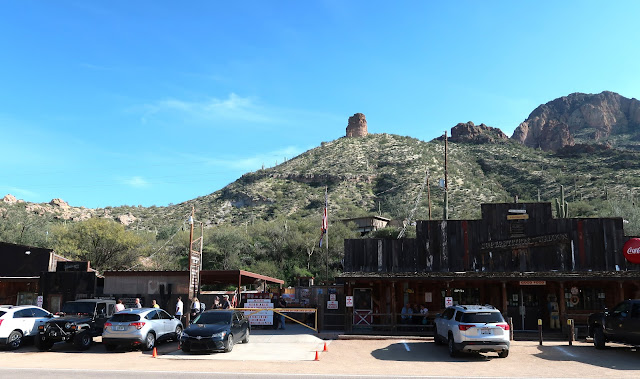 The influx of cash from the hordes of tourists seem to be exemplified by the papering of virtually every interior surface with real dollar bills upon which visitors have inscribed their names or other things: 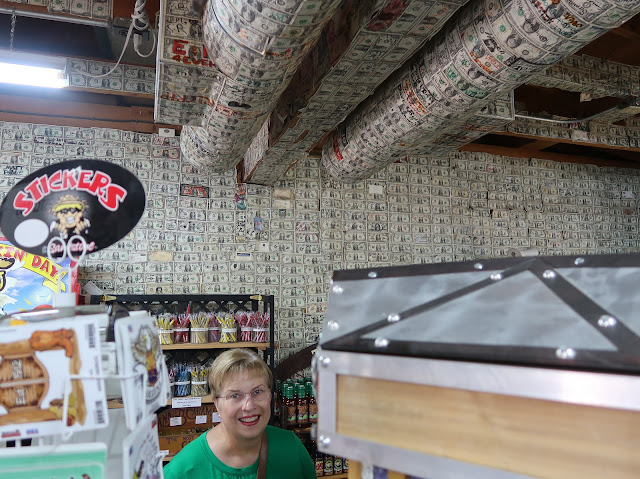 There's a restaurant, an open-air bar with a live band and a mercantile store, all of which were crowded when we were there.
Here are some more photos: 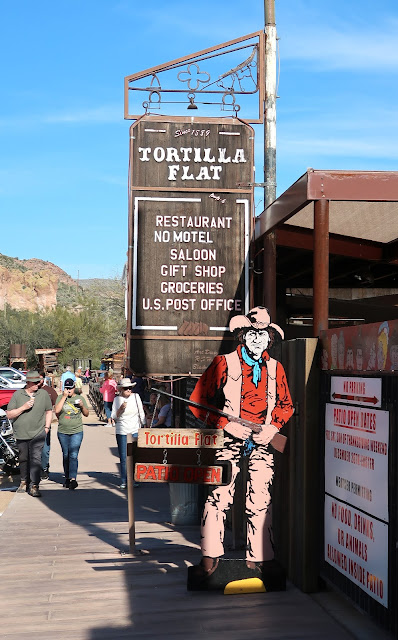 Below are John and Bobbie Jo with Sandy, enjoying some ice cream, seemingly oblivious to the poor soul hanging in the background who, I suppose, must have failed to pay for his ice cream: 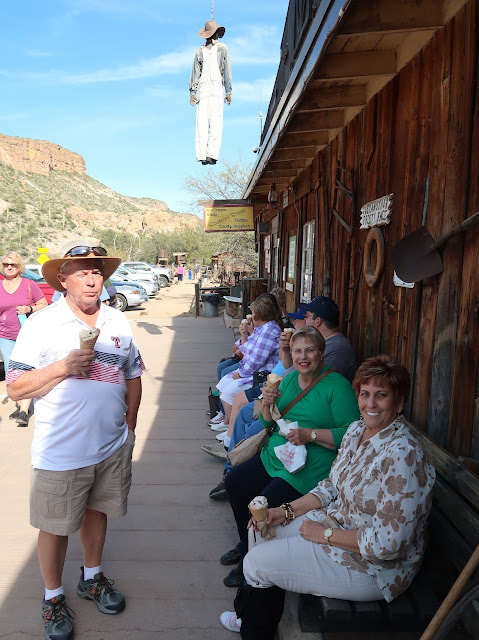 The road extended well beyond Tortilla Flat to an area, according to John, that had a magnificent view of Canyon Lake. Unfortunately, it was closed due to landslides.

Heading back to Mesa in the late afternoon, I took a photo of Superstition Mountain:

This was the best I could do, but Bobbie Jo gave me permission to use a photo of the mountain that she took a couple of years ago that put mine to shame. (This would be a good time to remind everyone that everything in this blog is copyrighted.): 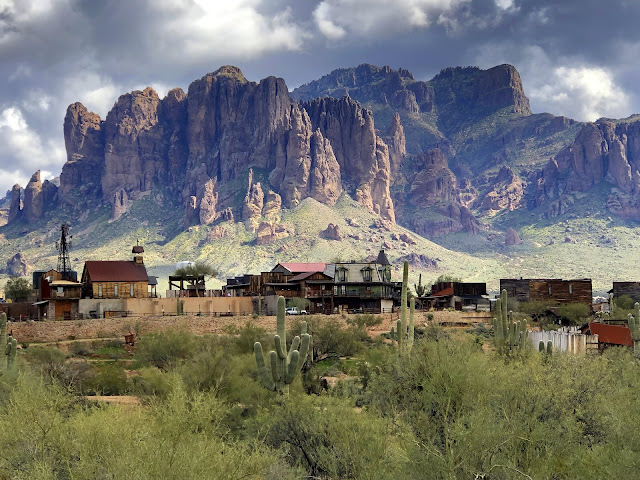 I would love to have taken credit for this photo, taken from just beyond the Goldfield Ghost Town complex on Arizona 88. The clouds above the mountain added menacingly to the haunting folklore about the mountain that goes to back to Native American times. They believed the mountain was haunted and even that it was the entrance to hell itself, due to the unexplained disappearance of tribesmen within. It is also the site of the never-located Lost Dutchman mine--a treasure trove of folklore in itself. The Lost Dutchman State Park is nearby.

There are so many interesting things on highway 88 near Superstition Mountain. Here's another one connected with Elvis that, much like his home in Palm Springs that we showed in an earlier post, we didn't know existed until now. It is called the Elvis Memorial Chapel: 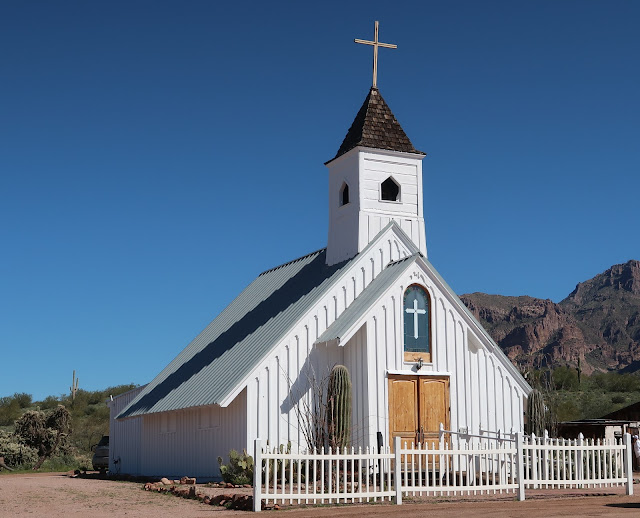 It's connection with Elvis is that it appeared in the 1969 western movie, "Charro," in which Elvis starred in a dramatic role. Out of 31 movies he made, "Charro" was the only one in which he did not sing, except out of frame in the opening trailer. He had scenes inside and outside the church, which was part of a western movie town set that was not far away, in Gold Canyon. Many western movies and series were filmed there but, in 2004, a fire devastated the set, leaving only the church and one other building undamaged. The church was disassembled and painstakingly reassembled in its current location near the Superstition Mountain Museum.

We also had a great time visiting with family, having a nice dinner with nephew Aaron and nieces Staci and Miranda, along with Aaron's wife, Kristy and grand nephews and nieces: 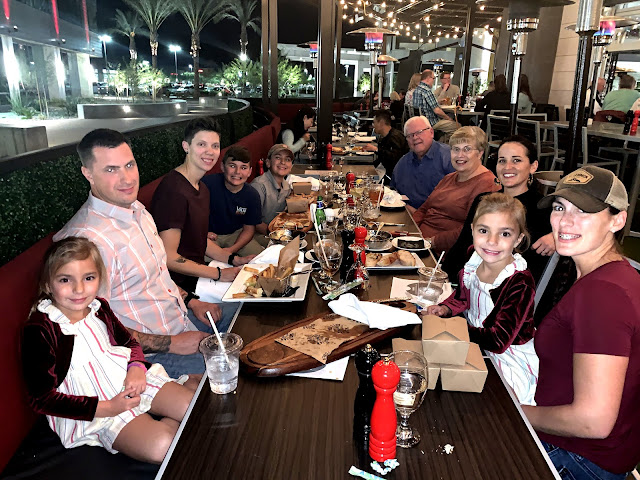 On another evening, we made a visit to the busy Organ Stop Pizza restaurant in Mesa. Having been a church organist, of sorts, for many years, I have always enjoyed organ music and, especially, theater organs. The fabulous instrument at Organ Stop is the largest Wurlitzer theater organ ever built, consisting of 5,500 pipes in 78 ranks. The original organ was built in 1927 and played for years in the Denver Theater. Few of these magnificent instruments remain in playable condition nowadays, and I can't think of any other means by which a single organist can play what is essentially an entire orchestra, including drums, cymbals, xylophones and the like. If you're ever in Mesa, it is a wonder to watch and listen while you eat your pizza:

Even though Sandy was still suffering with foot problems, she bravely accompanied me on a tour of the beautiful Desert Botanical Gardens in Phoenix. I'll reserve the next post for photos from that visit.