Palm Springs, Graveyard of the Stars

We are fond of taking tours when they are offered to places we'd like to see. There's nothing quite like having a guide who knows where to find things we would never discover on our own.  Fortunately, there are ample opportunities to do that here in Palm Springs.

Older folks like us grew up in the latter years of the golden age of Hollywood stars, and we still remember their movies, appearances and concerts and the glamour associated with them. A very significant number had homes or second and third homes here in Palm Springs, and we thought it would be cool to see these. So, we took a celebrity homes tour on a bus with about 40 other geezers who wanted to do the same thing.

It would be difficult, actually, to name one of the old movie stars who didn't have a home here. The names included Eddie Fisher, Bob Hope, the Gabor Sisters, Steve McQueen, Gene Autry, Frank Sinatra, Jack Benny, Dean Martin, Cary Grant, Sammy Davis, Jr., Bing Crosby, George Hamilton, Elizabeth Taylor, Suzanne Somers, Sonny and Cher and many others. So did Kirk Douglas who, coincidentally, passed away at age 103 while our tour bus was near his home.

The tour was quite interesting, but there were a few things that were particularly striking: 1) While their homes are mostly still here, almost all the stars who owned them have passed away. These homes are now owned by other people, and a couple have been demolished. 2) Most of the homes were difficult to see because of the fencing and shrubbery that the stars had installed to, uh, keep peepers like us from seeing them. 3) After looking at the photos afterward, we found, in some cases, we had forgotten which ones belonged to which stars. If you ever do something like this, we would highly recommend taking notes of every photo you shoot, rather than count on your memory--something that is notoriously unreliable for us nowadays.

Some of the homes were simply inaccessible due to their locations  in secluded areas. Bob Hope's magnificent modern home in the Araby Hills, for example, is inaccessible to any kind of tourist's vehicle, much less a bus, as there is no turnaround area at the guarded gate. Our tour bus driver told a story about another new driver having to back his bus all the way down the mountain road upon making this discovery. However, since the house is way up in the hills, it is visible from the valley below, but few details can be seen without binoculars.  Here is a photo borrowed from the internet: 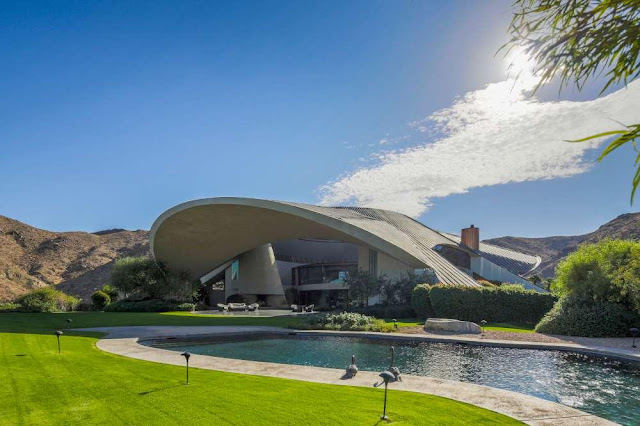 It is a remarkable house, worth reading about on the web.  Bob Hope had at least two other homes in Palm Springs.

I'm going to include some photos that I took of the few homes that hadn't been hidden from view. The photography isn't great from a moving bus, but they'll have to do: 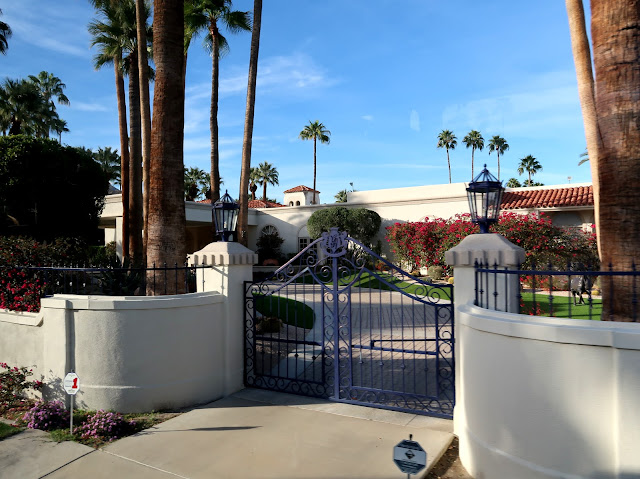 Above is the Gene Autry estate, by far the grandest that we saw. He and Bob Hope were perhaps the wealthiest of all the stars who had homes here, as they had the foresight to buy up vast parcels of land in the area for as little as a dollar an acre. Both were also very generous in their philanthropy, especially here in Palm Springs. 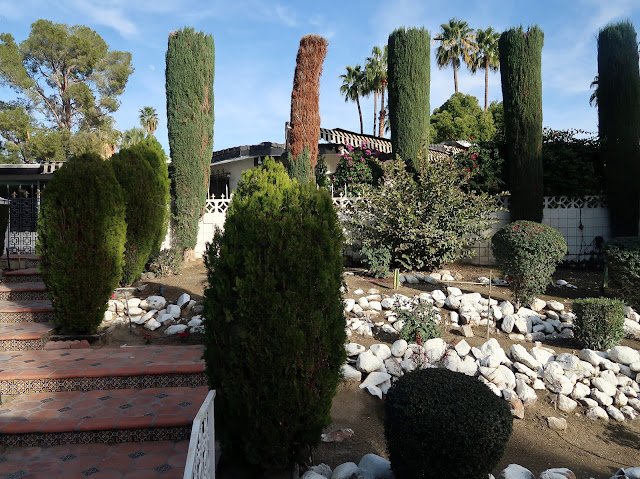 Barely visible behind the shrubbery is the house where Marilyn Monroe lived. 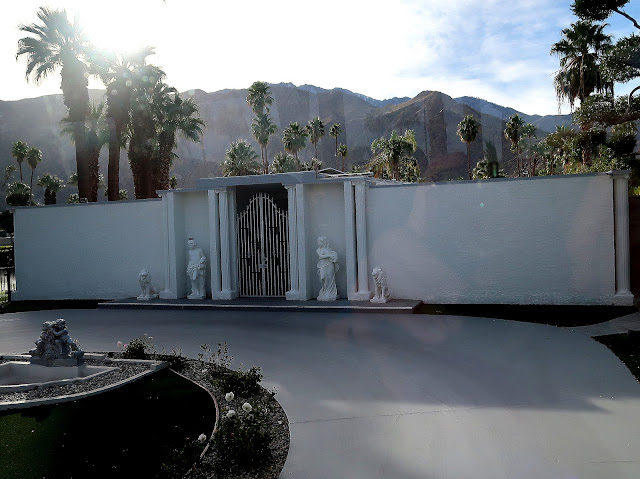 Above is the front of Liberace's Palm Springs home, in which he died in 1987. 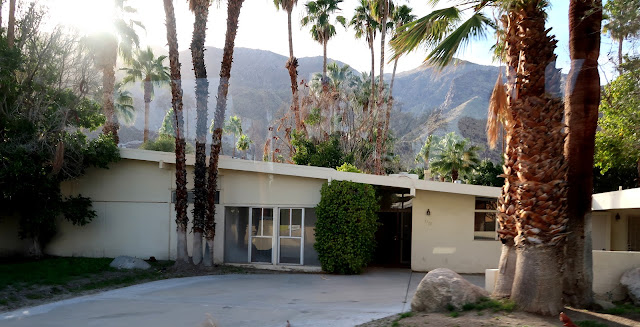 Above is one of Cary Grant's homes here in Palm Springs, now owned by a member of his family. It sits unoccupied and deteriorating, sadly.

About halfway through the tour, the bus stopped in Desert Hot Springs at a small convenience store where we were able to take a restroom break and where we were treated to a date shake, which the store claims is the best anywhere. I have to admit, it was delicious, and I don't think I left a molecule of it behind. 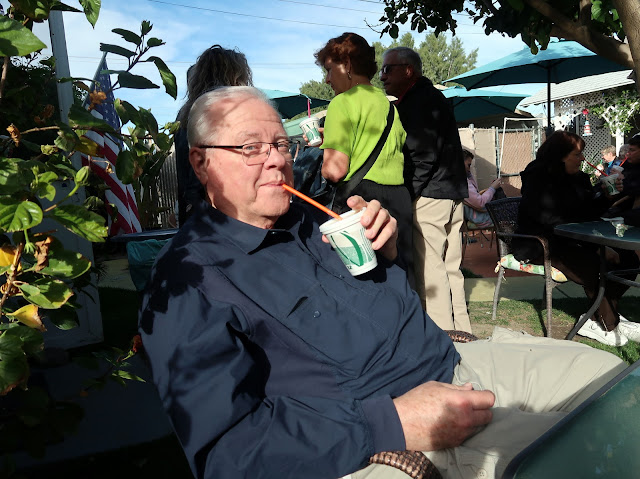 Although we saw dozens of homes of the stars, I've omitted those without good views or whose owners we couldn't remember. However, we were quite surprised to learn that Elvis Presley's honeymoon home is here in Palm Springs: 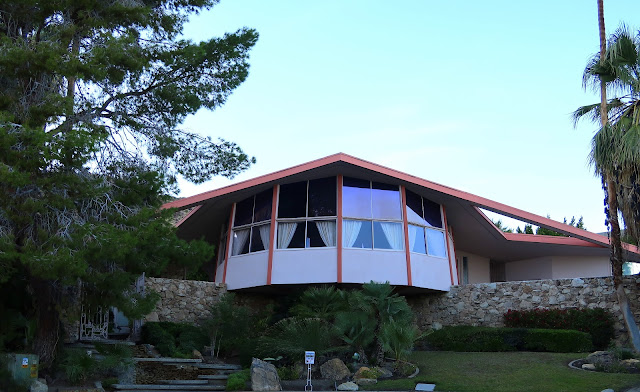 It may surprise you to learn that Sandy has a bit of accidental history with Elvis, having visited him twice in his home in Killeen, Texas when he was stationed at Fort Hood in the U. S. Army.  He lived across the street from Sandy's cousin, so the two girls would go over and visit him, along with Elvis's mom and dad, who also lived in the house. He would often be drinking a soda, his preference being a Pepsi with a package of peanuts poured into it. The girls would giggle and decline any refreshment, but Sandy got Elvis's autograph on both visits. These are safely tucked away, as you might imagine.

We also toured Graceland a few years ago, the experience having been recorded here in this blog. Sandy's learning of this, Elvis's honeymoon house in Palm Springs, elicited no small amount of excitement from her so, after doing some checking, I learned that small-group private tours of this house could be arranged. I promptly booked one, thinking it would be only appropriate that Sandy should be able to see all of Elvis's homes--the four that we know of, anyway--being the house in Tupelo in which he was born, the Killeen house, Graceland, and now Palm Springs.

As it turned out later, we were the only couple on the tour, and we had the run of the whole house! I will have photos of this tour and more adventures in the next post.