Following our successful but exhausting trip back from L. A., we took it easy the following day, which happened to be Valentine's Day. I made an early reservation at Tom Ham's Lighthouse Restaurant overlooking San Diego and the bay, and Sandy and I celebrated with an enjoyable dinner at a table by the window, watching the sailboats: 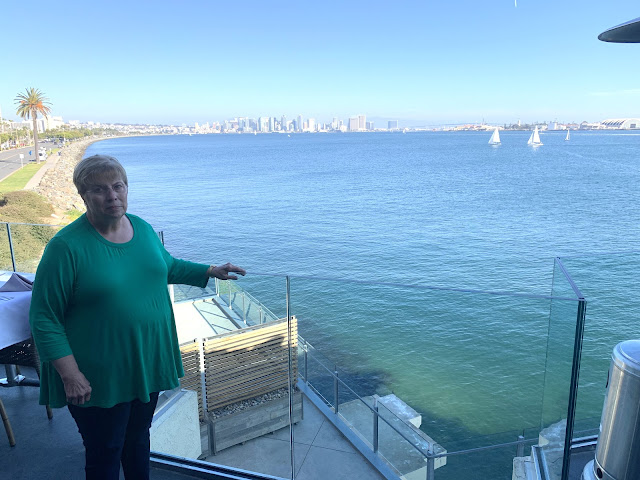 From our table, we saw this view of an antique wooden inboard runabout boat, which I'm guessing may have been a Chris-Craft of mid-1950s vintage. What a sight! 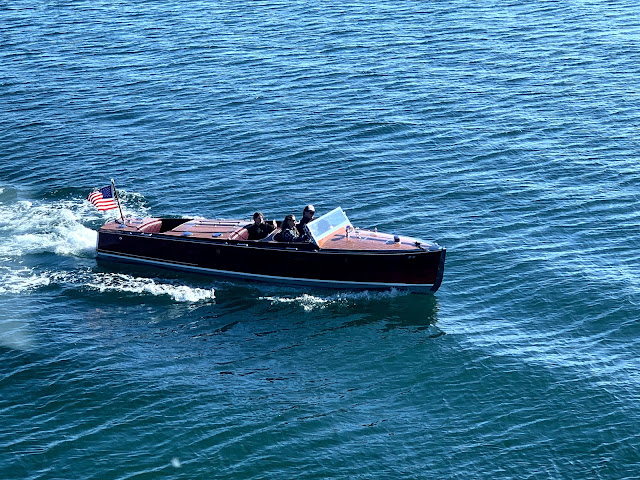 After a fine meal, we drove around the harbor to do a little sightseeing, to view how things had changed since our last visit long ago.

One of our stops was the famed Hotel Del Coronado, across the bay bridge. To our horror, the hotel was no longer positioned regally alone on the beach as we remembered, but now squeezed in among a lot of other residential high-rise development. I suppose it had to happen, but it was painful to see that it was no longer viewable as the lone landmark masterpiece that it used to be. We had to do some serious twisting and turning among the new buildings surrounding it to find a place where we could even take a photo. The view below was all we could muster without checking in as guests. Since room prices begin here at $609 per night, we decided this photo would have to do: 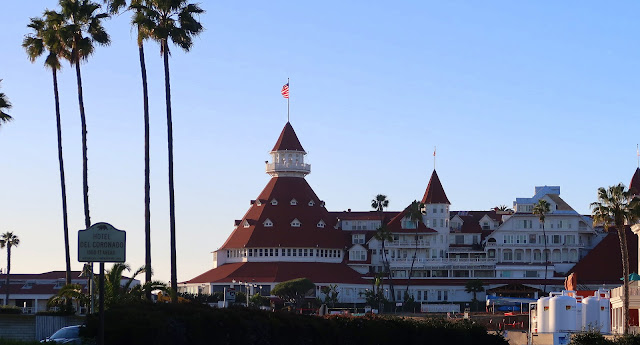 Thankfully, a similar fate had not befallen the aircraft carrier U. S. S. Midway, still docked in San Diego Bay as a museum in all her majesty: 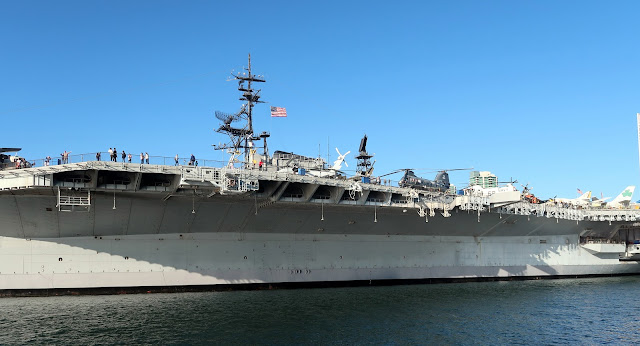 At 69,000 tons, she was the largest ship in the world until 1955.  Built in 1945, she served the U. S. Navy for 47 years and saw service in the Vietnam war and as the Persian Gulf flagship in Desert Storm. She was a fast carrier, capable of a top speed of 30 knots, at which speed her oil consumption was 900 gallons to the mile. If she were to fuel up in California, it would probably bankrupt the Navy.

Alongside the Midway was a 25-foot bronze statue of a sailor kissing a nurse, a replica of the famous photo taken in Times Square at the end of World War II. It is named "Unconditional Surrender." Commissioned in 2007, the statue was hated by snooty art critics but loved by the public, so it stayed put, even though some local board members overseeing artistic designs resigned in protest. Good riddance, would be my thought: 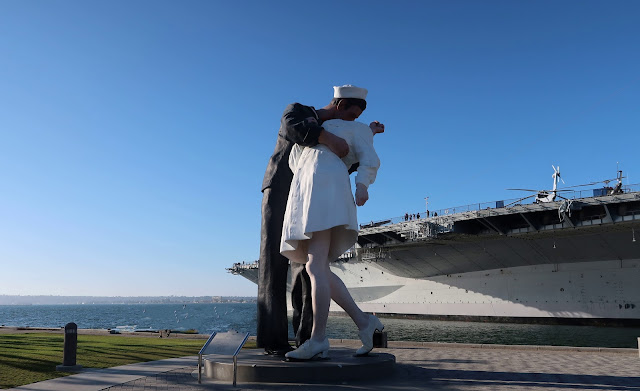 It might interest you to know that the photo above was taken by me but edited to remove unwanted objects. For example, just to the left of the sailor's right leg in the original photo, a cabin cruiser appeared, moored to the dock. Behind the heel of the nurse's shoe, I removed an onlooker but forgot to remove his shadow, which is still visible in the photo. I use an inexpensive program called Movavi Photo Editor to do this, although I'm sure there are other ones that are equally good and simple to use, giving alternatives to the expensive and complicated Adobe Photoshop, the choice of most professionals.

With this, we end our three-week stay in California, where we've had a great time in the beautiful weather, having plenty of fun adventures all the while. I hope you've enjoyed this time with us, although we've gone at a fairly leisurely pace, which is our norm now at our age. There is so much more to see and experience here, and we hope you will take advantage of all you enjoy that our beautiful country has to offer.

One parting shot at the high cost of most everything in California was this photo of a fuel price sign at our last lunch stop leaving the state on I-8: 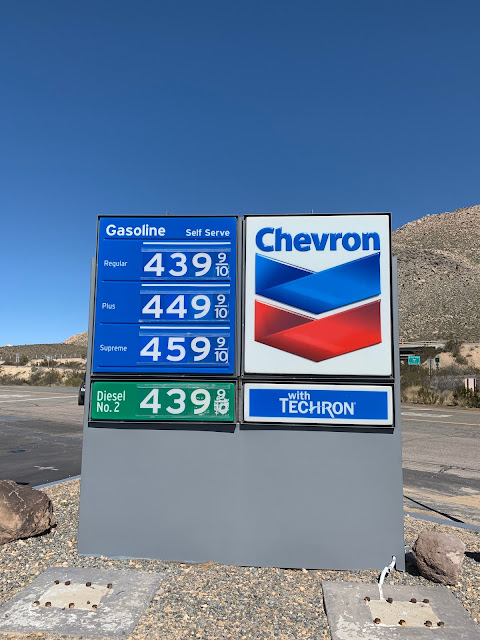 We didn't buy any diesel for Phannie here or anywhere else while in California, having planned to tanker an adequate supply for her trip through the state. The plan worked fine, and she still had about 1/4 of a tankful when we arrived back in Arizona, where we filled up for almost two dollars less per gallon.

The subject of the next post will be our first short visit to Quartzsite, Arizona and a meetup with a couple of our blog readers who have now become friends. I can't wait for you to meet them!