Beginning A Revisit of San Diego; A Foodie's Wretched Excess on the First Day

It has probably been more than three decades since Sandy and I visited the San Diego area. It was in the summer then, and we remembered since that time how perfect the weather was, compared to the scorching heat of Texas. During this visit, in the dead of winter, we couldn't tell much difference; it's stunningly perfect almost all the time--just a little cooler. Shirtsleeves are fine during the day, and a light jacket is all that's needed at night. If only one could afford to live here!

We are staying at a very nice park right on the bay; it's a little more costly than we are accustomed to paying, but it's so nice to be close to the water and to the city itself. This is our site: 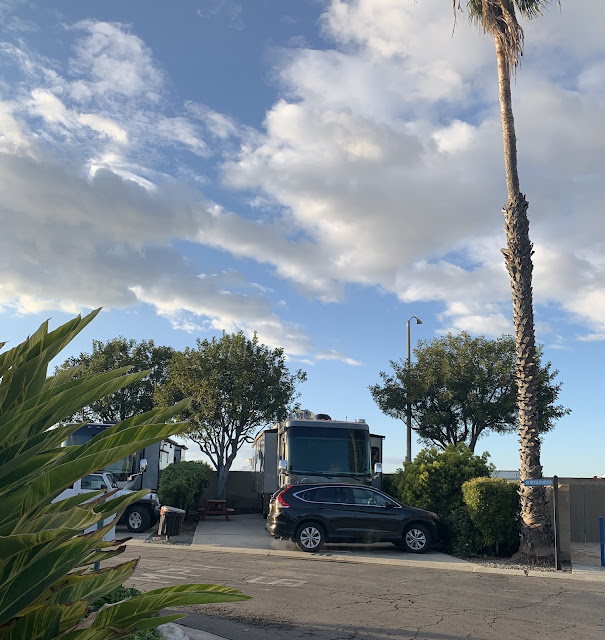 Here's our view, just a short walk away: 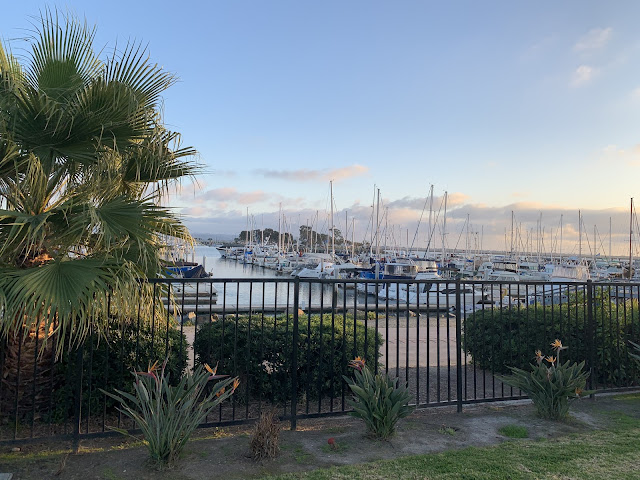 At day's end, we can walk out to a nearby beach and watch the sun disappear into the Pacific Ocean: 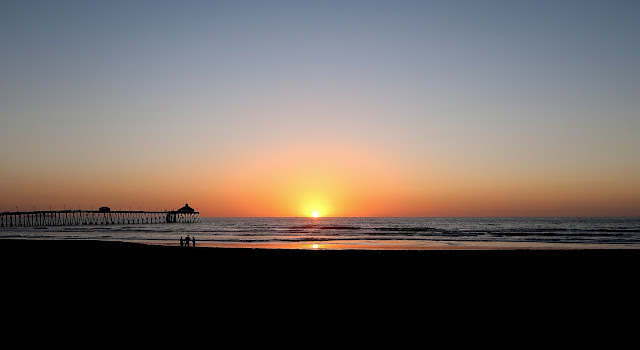 The park is full, and will remain so during our entire stay. Apparently, we're not the only ones willing to pay a bit more for such nice surroundings. Unfortunately, this comes on the heels of some other significant expenses for Phannie. The last of her original roof air conditioners finally gave up the ghost before we left Palm Springs so, hopefully, the three relatively new ones will get us by until we hang up the keys, whenever that may be. (Yes, to all our snowbound friends, we run air conditioning nearly every day; sorry to have to tell you that.)

Our trusty TST tire monitoring system also began to give some faulty readings about the same time the A/C gave up. For no apparent reason, the monitor would suddenly begin showing a pressure of 441 psi on one of the tires, irrespective of which was being sampled at the time. Of course, that sets off the alarm, and then, you have two choices: Keep silencing the alarm every few minutes or turn the system off.

Since the old  TST system had given us excellent service for many years, I figured I might was well retire it and get a new version. I ordered the new system with a color monitor and, so far, I really like the looks of it. Here's a photo before I installed the sensors: 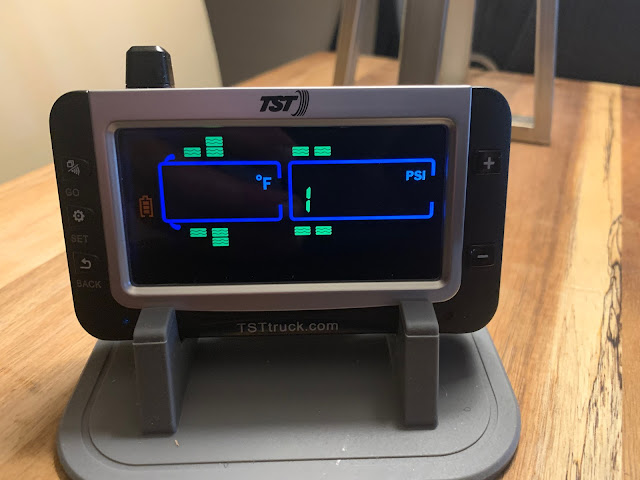 We're going to have another big bill at Caterpillar in Tucson when they do the 100,000 mile service on Phannie's engine in early March. So, this is turning out to be a fairly expensive winter trip. One thing's for sure: stuff's gonna break now and then, and keeping up with Phannie's scheduled maintenance seems to have paid off, considering her relatively trouble-free drive train all these years.

When we arrive at a new destination, we have developed a post-setup habit of hopping in the car and doing a little exploring of the surrounding area. In the process, we try to find what we hope is a good place to eat dinner. I think this is because we're usually tired of being on the road, and neither of us wants to mess with fixing anything to eat.

Sometimes, we happen upon some surprisingly good restaurants, and I just have to tell you in detail about this one in San Diego. We were hungry for seafood, so I found a listing for a place named 100s Seafood Grill Buffet. It had very good reviews on Yelp, so we headed there for an early dinner. I probably wouldn't give this much attention to an eating joint but frankly, I've never seen anything like it--especially since it's devoted mostly to seafood. This place is huge, encompassing three large rooms, once of which is devoted just to desserts.

During our travels, we have found that buffets are a hit or miss when it comes to quality, freshness and cleanliness, but this was over-the-top in all three. In the first room is the hot buffet with perhaps three or four dozen selections of cooked items--mostly seafood, but with some other dishes for landlubbers. There was also a Mongolian grill, if you wanted to pick out your own selections and watch them cook it. There was a selection of several soups including lobster bisque and an excellent clam chowder. 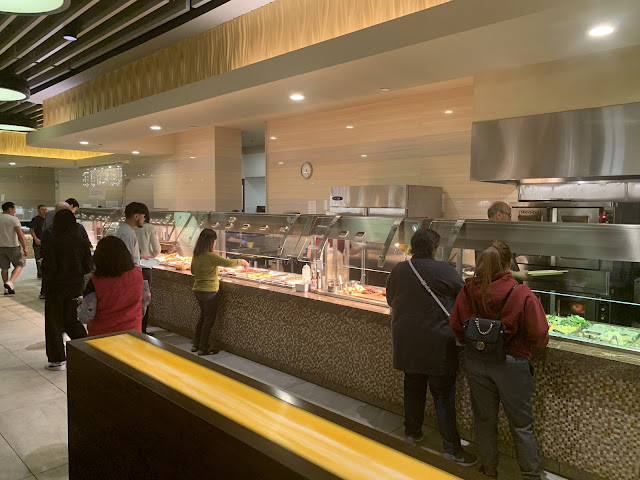 In the next room were the cold seafood selections and salads: 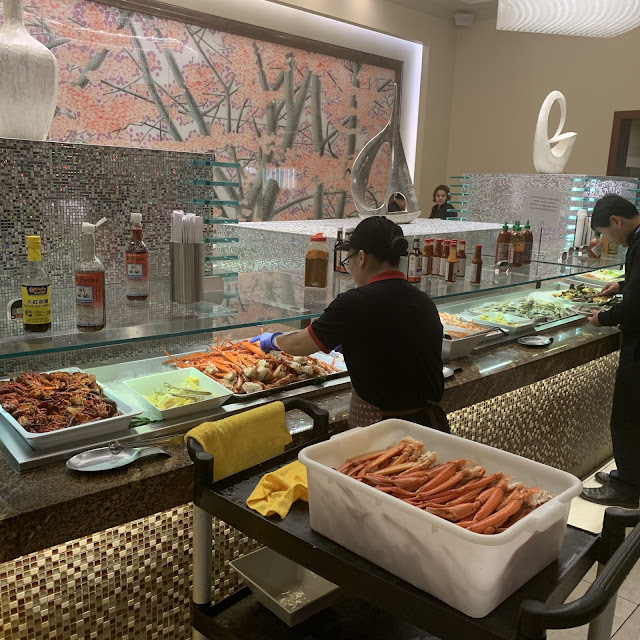 In this photo, you can't see the salads, which are on the opposite side. And yes, those are all-you-can-eat king crab legs. In the next room were the desserts: 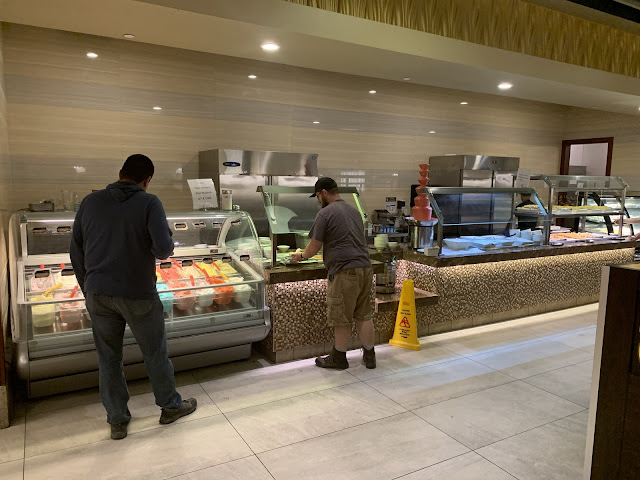 In case you're wondering, the first case on the left above has 24 flavors of ice cream. I couldn't get the whole line of desserts in the photo. You can tell how spotlessly clean the place was.

The big question, of course, is whether it was good. The answer is a resounding yes!  Apparently a lot of folks agree; take a look at the people waiting patiently to be seated when we left: 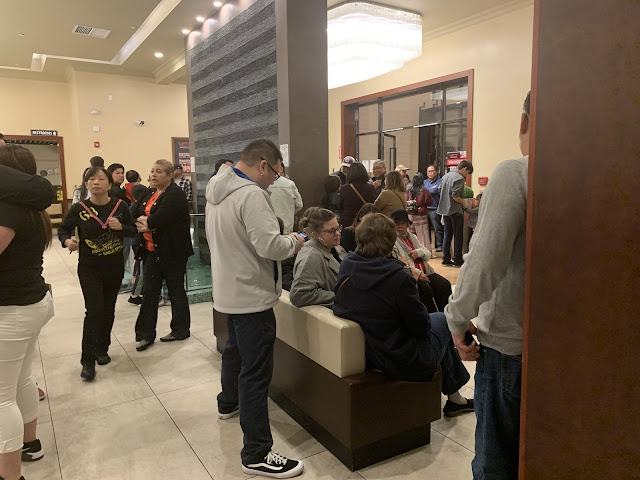 The price? Well, it was about sixty bucks for both of us, I think, which, considering the incredible selection, variety and quality, didn't seem too bad. The only semi-comparable buffet in our travels was at the Rio in Las Vegas, but its seafood section was skimpy compared to this.

Yes, we're foodies and, when we find something like this--the definition of wretched excess--we feel obliged to share it, in case you're in the area sometime. But beware--go early, or you'll be like one of the crowd twiddling their thumbs, as are the hungry folks above.