More on Palm Springs - Expensive Stuff and Hamburgers With Insults

I began the last post by describing how tight the spaces are here at this park. Well, I have included a short video of a monster rig that includes a heavy-duty Volvo diesel tractor carrying a Smart Car behind the cab and pulling one of the longest fifth wheels I have seen. It has stopped in the street directly in front of Phannie, and appears to have a worse problem than we did in terms of maneuvering:

The reason I had to do a video is because the rig is so long, I couldn't capture it all with a photo.  As it turned out, the driver was barely able to turn the corner at the end of the street, and he finally found a site long enough for the fifth wheel. But I haven't seen the Volvo truck or the Smart Car since they arrived. There's no space at
the site for them; they must be parked somewhere else.

Sandy has been a little under the weather for most of our first week here, so we have mostly just done some local sightseeing and did a lot of eating out. We have learned a few things, some of which we already knew. First, just about everything is more expensive in California, and especially here in Palm Springs. A fillup in our little Honda CRV costs ten bucks more here than in Arizona; I don't want even to think about filling up Phannie. We filled her up leaving Arizona and, hopefully, won't have to buy any diesel in California.

Eating out is considerably more expensive but, even so, we've found some great dining joints that I'm putting on our list of favorites page linked here on the blog.  Here's a sampling: 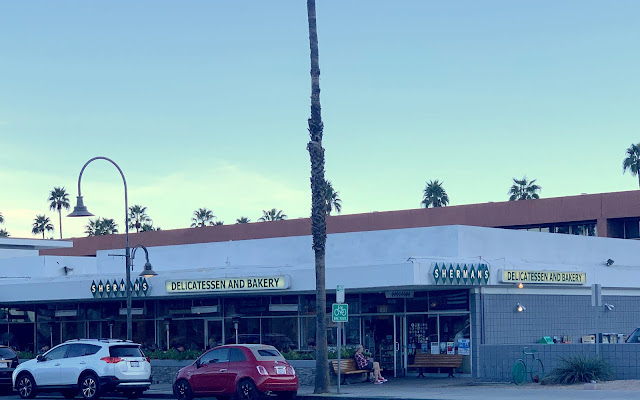 Sherman's Deli (this is the downtown location) has been here for a long time. Now, there isn't a sandwich I like better than a really good hot pastrami  on rye, and this place knows how to make them --definitely the best I've had outside New York City: 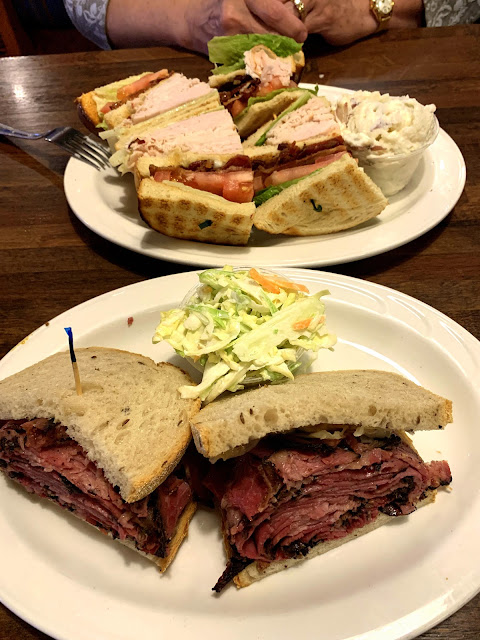 Now take a look at Sandy's club sandwich in the background. She could eat only half, so there was enough left over for us to have two sandwiches for lunch the next day. The bill?  Fifty bucks with a tip.

Palm Springs even has a toffee store, for goodness' sake! It's supposedly the world's best, but at $30.00 a pound?! 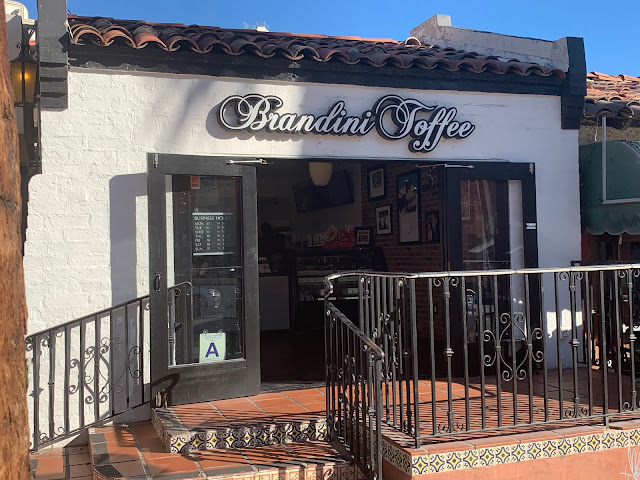 Yes, being a toffee lover, I bought a small amount. It was good, but not THAT good!  Take a look at the packaging, which may have cost as much as the candy: 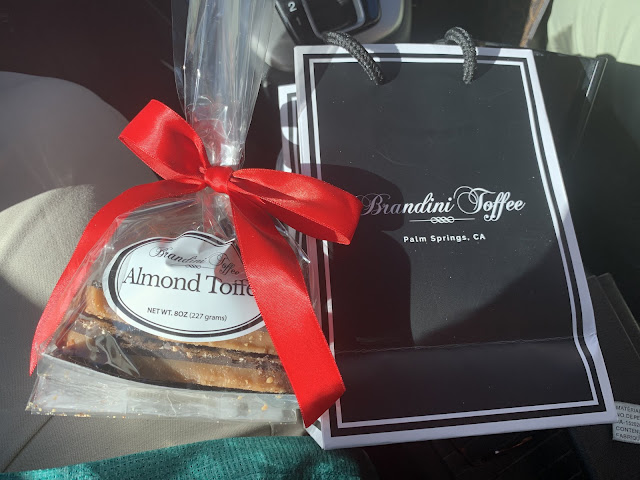 Sandy and I walked around old town Palms Springs later and stopped for a single small serving of gelato apiece: 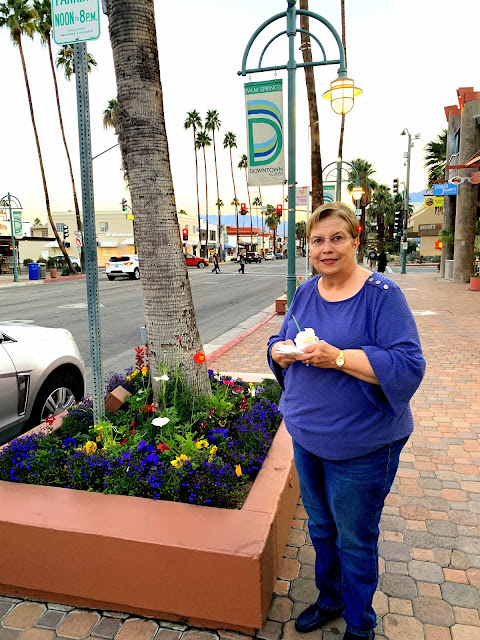 Wanna guess the cost of the two scoops of gelato?  Eleven bucks. See what I mean about it's being expensive here? Clearly, this is where the other half (not our half) live.

While we were walking, we spotted this sign in the window of an office building: 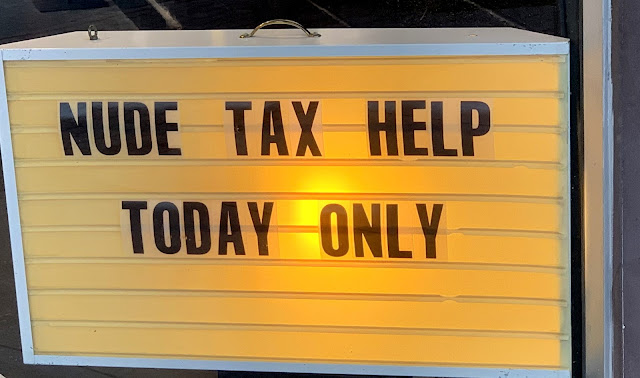 This is something we don't see in Texas every day and, since Sandy was staring at the same sign and then back at me for my reaction, I figured my response should be a carefully considered one. I think I said, "I wonder if they're talking about the tax preparer or the customer?" That seemed sufficient for me to avoid injury, so we moved along quickly.

I am always on the lookout for a local eatery where the food is good, but it's so much more interesting if the place is also quirky. The next one got good reviews, and the sign was just too inviting to pass up: 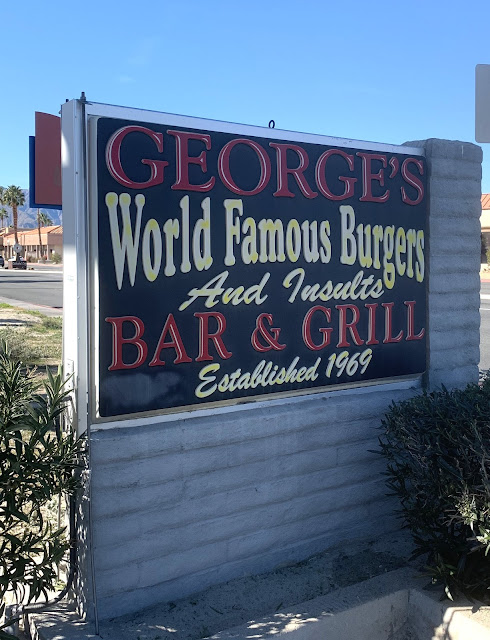 Did you notice the "And Insults" on the sign?  This I had to experience. Although I failed to get a photo of the inside (partly out of fear of being berated by the owner), I'll try to describe it for you. It was a very nondescript building outside and inside, with no windows; it was more a bar than a restaurant. Inside were a few booths and tables on the left side of the room and a curved bar with barstools near the front of the room. The kitchen was open to view by those sitting at the bar, so we chose a booth that was out of the line of sight of the kitchen. The owner was also the cook, who, as it turns out, was George's son. Apparently, George had already gone to his reward and had left his son to carry on the business, including his famous insults to customers.

From our vantage point, we were close enough to hear the owner's
commentary, which was directed mostly at the patrons sitting at the bar. Judging by the insults flying their way--including threats by the owner to toss their burgers in the trash for various perceived transgressions or their trash talk directed at him. We guessed that the customers at the bar were probably regulars and gave the owner as much grief as they got in return.

In a couple of minutes, there appeared at our booth a waitress with a purple hairdo and a bit of an attitude. "Whaddaya wanna drink?"

Somewhat gingerly, we ordered our usual Diet Coke and iced tea, and her eyes rolled back in her head, as if to say, "Oh, one of THOSE," as if we were the first customers to have ordered a non-alcoholic drink in the last ten years. She brought the drinks fairly quickly and then said, "Whadd'l ya have?"

We ordered a burger apiece and a single order of fries to share. She grabbed the menus and hurried off. In a minute, we heard the patties hit the griddle and begin to sizzle on the other side of the half-wall separating us from the cook. Shortly afterward, she brought our meal and, with it, a very small paper cup filled with ketchup. When she set the ketchup on the table, she said, "This is for your fries; better not let him (pointing toward the owner) see you putting any ketchup on your burgers. According to him, ketchup doesn't belong on hamburgers."

I had seen comments on Yelp about the owner's refusal to prepare a hamburger with ketchup on it and, luckily, we don't use it on hamburgers anyway, so we felt pretty safe. I'm sure that, if he had seen us do that, we would have received one of his famous insults. The burgers? Well, they were actually quite good--hot and fresh with tasty hand-formed patties, but we're not sure they could be classified as "world famous," as the sign outside indicated. We finished the meal without incident or insult--which was slightly disappointing, but found the whole experience quite a hoot.


There are a LOT of restaurants here, and we were pretty lucky in finding some really good ones that we've listed on our favorites page--the first we've listed in California since we haven't spent much time in this state.

Since Palm Springs has been a playground for the rich and famous for decades, many of the streets are named for the stars of yesteryear, like Bob Hope, Doris Day, Frank Sinatra, Gene Autrey, etc. The streets are wide and immaculate, and the landscaping is beautiful on most of the major streets: 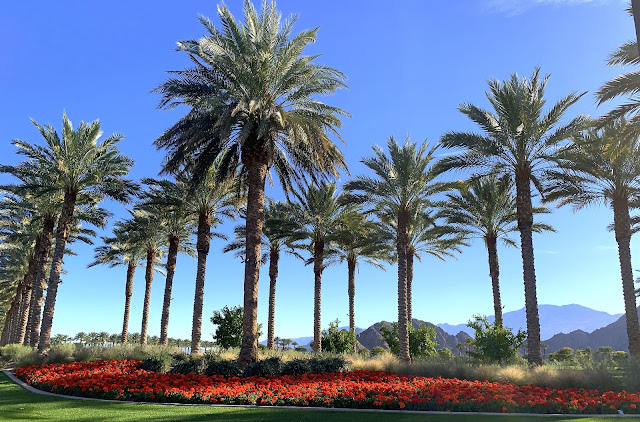 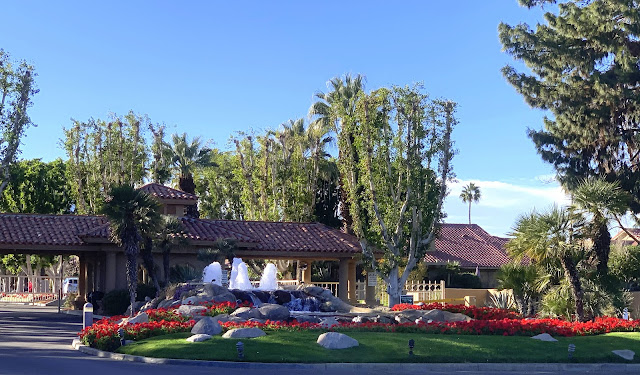 We did not see here any sign of the homeless encampments that appear to plague Los Angles and San Francisco. I don't think they would stand for it here.

Sandy is feeling better, so we have a number of additional adventures planned to tell you about, so stay tuned!